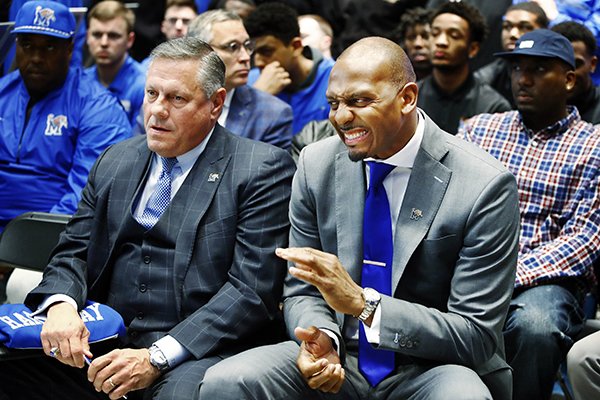 FAYETTEVILLE — Like his predecessor, new Memphis coach Penny Hardaway says he would like to renew a basketball series with Arkansas.

Speaking on Sports Talk with Bo Mattingly on Wednesday, Hardaway said he would like to renew games with regional programs, which were ended during the Memphis tenures of former head coaches John Calipari and Josh Pastner.

“I want to play all of the teams we used to play back in the day to get the rivalries going again,” said Hardaway, a two-year letterman at Memphis from 1991-93. “I would love to play Arkansas.”

Tubby Smith, who was fired by Memphis earlier this month, and Arkansas coach Mike Anderson acknowledged last May they had conversations about renewing the series. No games have been formally announced by either school.

"I'm looking forward to getting those dates and getting it set in stone, and hopefully it can be a series that continues for a long time,” Anderson said last May.

Arkansas and Memphis played for 12 consecutive regular seasons between 1991-92 and their final meeting in January 2003. The Razorbacks lead the series 11-10.

"We have to play national games," Calipari told the Arkansas Democrat-Gazette in 2002 when asked about ending the series. "You can't play all regional games if you're being a national program. We don't need Arkansas to sell out our building."

Calipari left Memphis for Kentucky in 2009, but Pastner, a former Calipari assistant, continued the practice of not playing Arkansas and other regional teams for fear it would undermine the Tigers’ recruiting efforts in Memphis.

Beck and Stewart were starters for the Razorbacks’ 1994 NCAA Tournament championship game win over Duke, and Beck and Martin started the title game loss to UCLA a year later.

In addition to their regular-season games, Arkansas and Memphis played twice in NCAA Tournament in the 1990s. The Tigers upset the Razorbacks in the second round of the 1992 tournament, and Arkansas defeated Memphis in the Sweet 16 in 1995.

“What I do remember about Arkansas is that they always had three or four Memphis guys on the team,” Hardaway said. “That’s what made the rivalry so special. There were always Memphis guys playing for the University of Arkansas and they would come back home or we’d go there, and we’d go up against the guys we grew up playing against since we were young. That kind of sparked the rivalry. Those games were very intense.”