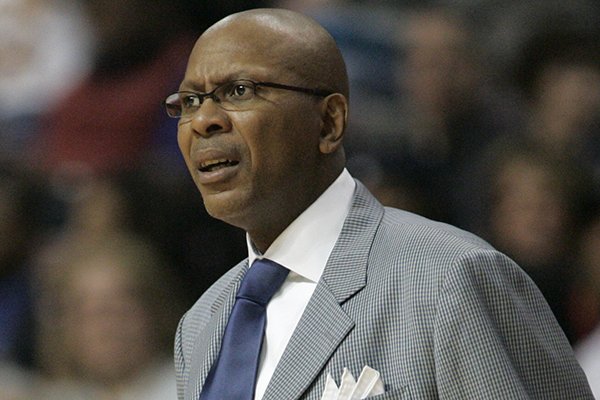 Darrell Walker, a former All-American guard for Arkansas, has been hired as head coach at Arkansas-Little Rock. (AP Photo/Duane Burleson)

The University of Arkansas at Little Rock officially announced Tuesday that Darrell Walker is its next head men's basketball coach.

Walker, a former University of Arkansas, Fayetteville All-American and NBA coach, signed a four-year, $275,000 per year contract through March 1, 2022.

UALR said in a news release that an official news conference will be held at 9 a.m. Friday at the Jack Stephens Center to introduce Walker.

When asked why the announcement was made three days before the scheduled news conference, Chancellor Andrew Rogerson said Friday will be when all the necessary administrators and Walker are in town.

"Everything's official now," Rogerson said. "We're absolutely over the moon about it. [Walker's] clearly going to be a real showman for the athletics program here with his history for hiring really good coaches for the basketball program, and we know he's going to continue that tradition. I can't wait to see him win."

"Darrell's strong Arkansas ties and his success as a player and coach can help propel the university to new heights," Conque said. "We are hopeful the central Arkansas community will continue to rally around our program as we build something special in Little Rock."

Walker did not respond to calls and text messages for comment.

The hiring comes after an ESPN reporter, Jeff Borzello, tweeted Sunday night that Walker was expected to be hired as the next head coach of the Trojans.

Rogerson said Monday that "nothing's been signed" with Walker.

"At that point, we were still deliberating, but he was obviously our favorite candidate," Rogerson said. "That wasn't a great surprise to see that [report] come out. I don't know how it was picked up, but it wasn't wrong. It was quite accurate. He was very much in the running, and we made it official."

Walker went 45-18 in two seasons as the head coach at Clark Atlanta University, which finished its season March 10 in a 72-61 loss to Claflin in the first round of the NCAA Division II Tournament.

Walker will take over a UALR men's program that has gone 22-42 in the previous two seasons.

Two-year Coach Wes Flanigan was fired March 9 after the Trojans finished the season 7-25, which was the most single-season losses in program history.

Flanigan was an assistant in 2015-2016 on former coach Chris Beard's staff during a 30-5 season, when the Trojans reached the second round of the NCAA Tournament.

Beard coached for one season before leaving for UNLV before eventually changing course and landing at Texas Tech several days later.

Walker was one of five finalists when Beard was hired at UALR.

"Last time, I think, from talking to Darrell, he agrees that he wasn't quite ready for the job 2-3 years ago," Rogerson said. "Now he is. It's good to have him on board."

Born in Chicago, Walker was a consensus All-American guard at Arkansas and played for former Razorbacks coach Eddie Sutton from 1980-1983.

Walker averaged 18.2 points, 5.7 rebounds and 3.3 assists during his senior season in 1982-1983, when the Razorbacks reached the Sweet Sixteen before losing 65-63 to Louisville.

Walker was drafted by the New York Knicks with the 12th pick in the 1983 NBA Draft, and he had a 10-year career that also included stops with the Denver Nuggets, Washington Bullets, Detroit Pistons and Chicago Bulls. He won an NBA championship with the Bulls in 1993 during his final season.

Over the next two decades, Walker was an assistant and head coach in several professional basketball leagues.

Walker also coached the WNBA's Washington Mystics during the 2000 season.

Darrell Walker at a glance

COLLEGE Was head coach of Clark Atlanta in 2016-2018, leading the Panthers to the NCAA Division II Tournament in both seasons with a 45-18 record.