Wade Watts (Tye Sheridan) escapes his bleak existence in “the Stacks” of 2045 Columbus, Ohio, via immersion in the ubiquitous virtual reality Oasis in the sci-fi adventure Ready Player One.

It would make sense if you were planning to make a film based largely upon junky pop-culture references from the '80s, you would hire the director who himself was the progenitor of an enormous amount of these reference points.

Interestingly, however, as much as Steven Spielberg has seen fit to pillage vast plumes of other artists' work -- everything from Back to the Future and The Iron Giant, to New Order and Stanley Kubrick's The Shining (much more on that later) -- he leaves his own body of work from the '80s, an era that includes, among other things E.T., Raiders of the Lost Ark, and its inferior sequels, entirely out of the mix.

Whether he didn't want to be seen indulging his own ego (perish the thought!), or, more infuriatingly, wanted to keep his own work sacrosanct, it's an odd choice, like watching a big '80s-era megaband, let's say Journey, get up on stage and perform nothing but selections from the Huey Lewis catalog.

In any event, Spielberg's big, depressingly dopey CGI-laden spectacle mashes up elements of Tron, The Matrix, Charlie and the Chocolate Factory, Aldous Huxley, and countless bits of pop culture ephemera and video game titles, but it is his appropriation of a particularly significant '80s film that finally put me over the edge from teeth-gnashing to outright fury.

We are in Columbus, Ohio, in 2045. In the future, the world seems to be a crummy sort of place, with space so limited there are entire neighborhoods comprised of houses parked on top of one another, one of which happens to be the home of our humble narrator, Wade (Tye Sheridan). Wade is a sweet-enough kid, whom, like practically everyone else on the planet, is all consumed by the Oasis, a massive, all-encompassing virtual world where gamers spend their waking hours wailing on each other and trying to solve the last mystery puzzle of the Oasis' mythical creator Halliday.

Said creator (played by Mark Rylance) came up with a last challenge for everyone before he died: A series of hidden keys reveals riddles that eventually lead you to the final challenge, the winner of which gets the entire, massive company he and co-founder Ogden Morrow (Simon Pegg) created.

Naturally, it is this last challenge that has the world utterly fixated, including the evil IOI corporation, the world's second biggest gaming company, whose leader, Sorrento (Ben Mendelsohn) despite having the name of a major cheese brand, will stop at nothing to gain control of the Oasis and become the single biggest company in the universe.

Of course, it turns out Wade alone is able to solve the game's first major riddle, gaining the first key, and making the keen acquaintance of Artemis (Olivia Cooke), in the process. Eventually joining forces with her and some of his other stalwart avatar companions, including the massive giant Aech (Lena Waithe), and the friends Sho (Philip Zhao) and Daito (Win Morisaki), Wade, known as Parzival in the Oasis, attempts to track down the other keys, with Sorrento and his evil minions hot on their trail.

The script, written by Zak Penn and Ernest Cline, based on Cline's novel, is mostly imbecilic: When it's not laying out its purpose in utterly shameless expository dialogue ("So how does this work?" is uttered by many characters, of items they must certainly already be well acquainted), it's beating us down with lame gibberish posing as deep thought ("Reality is real!"), or dousing us in Spielberg-approved sap, including a love story between two crazy kids who only know each other as their avatars before meeting IRL (in real life), and realizing that ... they look very much like their avatars!

It's dreary, sloppy spectacle filmmaking, of which Spielberg can quite literally create while lying prone on a memory foam bed with cucumbers protecting his eyes. But the central locus of my ire comes in the film's execrable second act where the series of clues leads the team to a virtual reality version of The Shining. Of all films to choose for this most dubious honor -- and lord, how I wish Kubrick's film had come out just a year earlier, in 1979, and been spared this indignity -- Spielberg and Cline's choice of targets, a controlled horror masterpiece of design, intelligence, and deep purpose, could simply not have been more poorly selected.

In outrageously loathsome fashion, we are subjected to Spielberg's gleeful send-up of the Overlook Hotel, a CGI-re-creation of some of the film's most infamous sets, an appropriation of the film's music, a visit to Room 237, elevators spilling out a wave of blood, the snowy maze, and yes, even a pair of twin girls asking to be played with forever and ever.

To take this film, of any film in the '80s, and trivialize it in this way, is an absolute abomination, and one I cannot imagine the late, famously intractable Kubrick would ever have imagined agreeing to. To take such a serious and well-crafted film as fodder for use in this utterly dispensable, syrupy glop no one will remotely remember five years from now, speaks beyond poor judgment and puts into question Spielberg's very honor as a director.

It speaks to the film's central conceit, to love a piece of pop culture history so intensely that you bleed it dry of life and fill it instead with embalming fluid in order to capture it for eternity. It's about as close to capturing the essence of the thing as a taxidermied otter or mounted deer head captures the life and soul of the creatures themselves. If you do this treatment to video games, a format already rendered flat and reconstructed, you're doing them more or less proper homage, but to take an actual piece of art and subject it to this sort of belittling glorification is highly disrespectful at best.

Opening himself up to pop-psych speculation, you might guess Spielberg harbors resentment that, despite all his endless accolades and mountains of gold, deep inside his gaping ego, he realizes he'll never be able to touch Kubrick in the true cinematic artist pantheon. Only he knows the genesis of this decision, of course, but it certainly comes off as an unforgivable act of jealous insolence.

Would that some lesser director do a similar hatchet job of E.T., a film much more in keeping with the lightweight themes of this film, you would expect the Grandmaster to take terrible umbrage and get his army of lawyers on speed dial. This is the equivalent of using Mozart's Requiem to sell Captain Crunch, or, more to the point, having Seth MacFarlane doing a goofy parody of Schindler's List (yes, that actually happened). It is, simply put, inexcusable.

Beyond that disaster, however, the film isn't ever much more than mildly diverting. Working from the ham-handed script, Spielberg's film devolves into a series of ever-more idiotic and improbable escapades, eventually, of course, leading to a final showdown that, logically speaking, makes about as much sense as your average Roadrunner cartoon.

Hamming it up, and turning his schmaltz machine to full-drench, Spielberg bathes us in his namby pathos, wrapping everything up in a perfect ball, and grinding down everything else in order to fulfill his moronically happy ending.

To quote from yet another famous '80s reference, go ahead and gag me with a spoon. 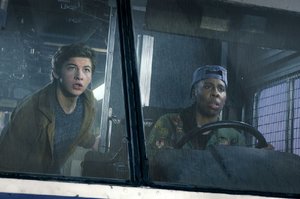 Wade Watts (Tye Sheridan) and Helen (Lena Waithe), who in the virtual world is a massive digital cyborg called Aech, race to solve a puzzle that might give them control of the largest company in the universe in Ready Player One.