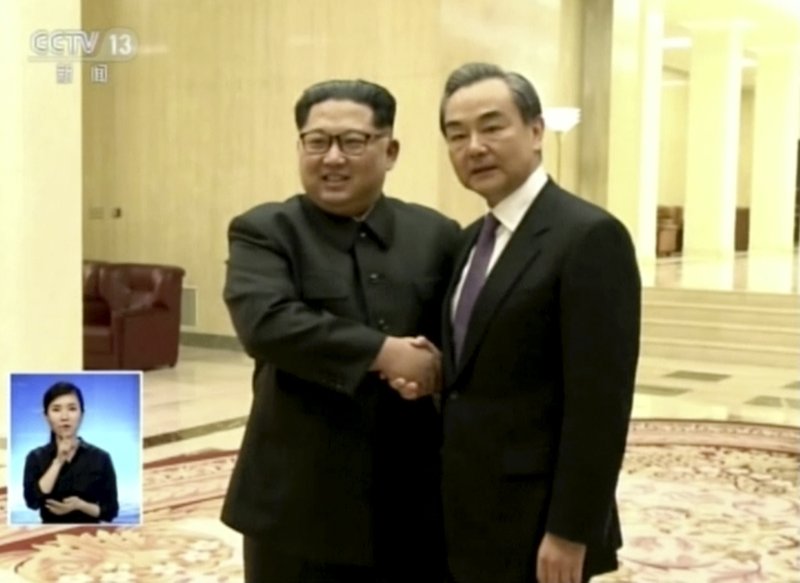 Across the Pacific, meanwhile, The New York Times reported that President Donald Trump had ordered the Pentagon to prepare options for drawing down U.S. troops in South Korea, weeks before he holds a landmark meeting with Kim. The Times cited several people briefed on the deliberations.

Chinese Foreign Minister Wang Yi while in Pyongyang also told Kim that Beijing backs North Korea's shift of focus to economic growth, along with its efforts to resolve its "legitimate security concerns" while taking steps to denuclearize, the Foreign Ministry said in a statement.

"The meeting has brought a favorable opportunity for a political resolution of the [Korean] Peninsula issue," Wang said.

Relations between China and North Korea have undergone a vast outward improvement after a recent visit to Beijing by Kim. China, North Korea's biggest trading partner, has joined United Nations sanctions against the North that have cut trade between them by about 90 percent.

Kim's March trip was his first to his country's only major ally since taking power six years ago, and the trip kicked off a flurry of diplomacy, including the plans for a meeting between Trump and Kim.

Reduced U.S. troop levels in the South are not intended to be a bargaining chip in Trump's talks with Kim, the officials, speaking on condition of anonymity, told the Times. But they acknowledged that a peace treaty between the two Koreas could diminish the need for the 23,500 soldiers stationed on the peninsula.

Trump has been determined to withdraw troops from South Korea, arguing that the U.S. is not adequately compensated for the cost of maintaining them, that the troops are mainly protecting Japan and that decades of U.S. military presence had not prevented the North from becoming a nuclear threat.

The directive has rattled officials at the Pentagon and other agencies who worry that any reduction could weaken the U.S. alliance with South Korea and raise fears in neighboring Japan at the very moment the United States is embarking on its talks with the North.

While the U.S., North and South Korea hold and plan summits, China has sought to reinforce its importance in the region and ensure that its interests are respected in any future negotiations.

Wang's visit was aimed at exploring ways China can contribute to the easing of tensions, along with implementing agreements reached in Beijing by Kim and Chinese President Xi Jinping, said Da Zhigang, a researcher at the Heilongjiang Academy of Social Sciences in northeastern China.

Another task for Wang this week was to try to stop Kim from veering toward the United States under Trump, some Chinese experts said.

"Beijing likely would want to ensure that Pyongyang would not develop a closer relationship with Washington than Beijing," said Zhao Tong, a North Korea expert at the Carnegie-Tsinghua Center for Global Policy in Beijing. "The visit by the Chinese foreign minister, the first in 11 years, appears to be part of that effort."

China sent troops to fight on North Korea's side in the 1950-53 Korean War, but relations have suffered in recent years over the North's reluctance to implement Chinese-style economic overhauls and Kim's continued development of its nuclear program.

China has long called for a return to six-nation talks on the North's nuclear program, and it welcomed the Koreas' summit as a way to reduce tensions. Analysts say China's sanctions may have helped prompt North Korea's diplomatic initiatives, although the secretive government in Pyongyang has not commented publicly on the issue.

China says sanctions imposed over North Korea's nuclear and missile programs are intended to further diplomacy rather than punish the North. Beijing opposes any measures that could topple North Korea's government and possibly lead to a tide of refugees crossing its border and the stationing of U.S. and South Korean troops in the North.

Information for this article was contributed by staff members of The Associated Press and by Mark Landler and Jane Perlez of The New York Times.