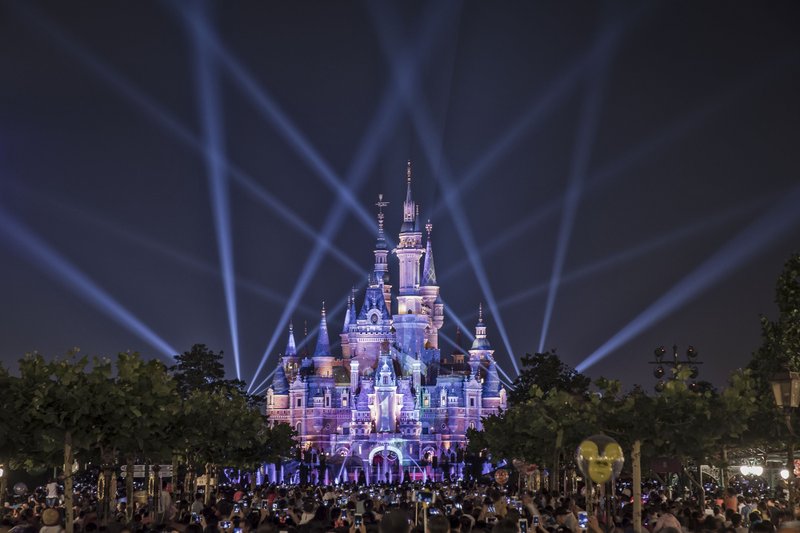 Lights are displayed outside the Enchanted Storybook Castle during the one-year celebration of Walt Disney Co. Shanghai Disneyland resort at the theme park in Shanghai, China, on June 16, 2017.

Two years ago, Wang Jianlin, once China's richest man, referred to his network of theme parks as a "wolf pack" that would chase Walt Disney Co. and its Shanghai Disney-land from China. Last week, Shanghai Disney unveiled a major expansion of its $5.5 billion park, now the most popular in China. Wang, by contrast, is out of the business altogether.

Wang's roller-coaster descent is in part a tribute to Disney's global appeal. But it also reveals shortcomings in government policy--and shows just how far China's entertainment companies must go to match Hollywood's standards.

As far back as the mid-1990s, large-scale theme parks began opening in China's bigger cities. By the early 2000s, smaller ones were a common sight across the country. Yet only 10 percent of those parks were profitable.

Enter Wang and his Dalian Wanda Group Co., one of the biggest and best-connected developers in the world. Wang had plenty of development experience. He had a vision too. As a patriotic army veteran, he wanted to build attractions that celebrated Chinese culture, not Mickey Mouse. And he wasn't joking around: He committed about $30 billion to build as many as 20 parks.

But Wang was soon in over his head. While Shanghai Disney drew 11 million visitors in its first year, Wang's $510 million park in Wuhan, expected to attract 3 million annual visitors, was attracting about 200 a day in 2016.

In retrospect, it may seem obvious that an experienced theme-park operator like Disney would triumph over a trash-talking real-estate developer. But Wanda's failures ran much deeper. Most important, it lacked Disney's reservoir of globally appealing intellectual property--including characters such as Mickey Mouse and the Avengers and instead relied on more traditional themes.

Traditional culture is certainly popular (and marketable) in China. But a theme park needs more than, say, "Hubei in the Air," a not-so-inspired virtual flyover of the Wuhan park's home province. Until China develops its own intellectual properties--and it surely will--Disney, Universal Studios and other global entertainment giants will have a distinct advantage.

In the short term, that's good news for Disney and other foreign operators that have the capital to spend big and the characters to make a theme park come alive. They and their local partners are likely to prosper until Chinese companies develop a compelling catalog of their own characters and fantasies. That won't happen overnight; it took Walt Disney almost 30 years to go from Mickey Mouse to the first Disneyland. But if nothing else, the journey promises to be entertaining.