Science and religion come together in physicist’s City Center Conversation by Francisca Jones | May 5, 2018 at 2:44 a.m. 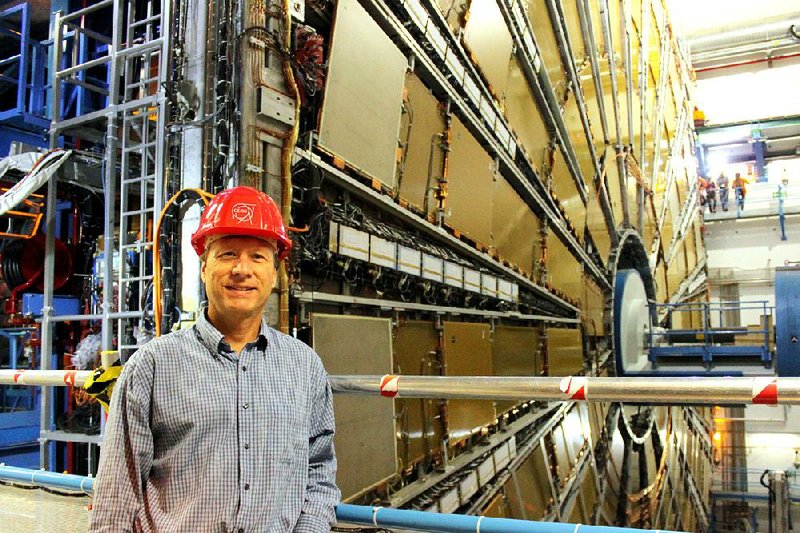 Experimental particle physicist Michael Strauss stands in front of the ATLAS detector, one of the two multipurpose Large Hadron Collider detectors at Switzerland’s CERN laboratory. Strauss will be the featured guest at the third installment of the event series “City Center Conversations: Conversations About God, Life and Faith in the City” at Little Rock’s Statehouse Convention Center on Tuesday.

Experimental particle physicist Michael Strauss has had a lifelong interest in physics, and comes across his share of people who view religion and science as unrelated topics.

One example is Stephen Jay Gould, a proponent of the term "nonoverlapping magisteria," which holds that aspects of science answer questions about the universe and religion answers questions about the meaning of life without any interplay of the two realms.

"My definition of faith is a trust system or a belief system that's based on evidence," Strauss said. "I don't think faith is not based on evidence. And so in some sense there is a correlation there. The strength of the evidence causes us to believe something that maybe is not perceptible by our normal facilities."

Strauss is the latest guest to be featured in City Center Conversations: Conversations About God, Life and Faith in the City, which will be held at 6:30 p.m. Tuesday at Little Rock's Statehouse Convention Center.

Strauss will explore the relationship between Christianity and science in talking with the Rev. Steven Smith, senior pastor of Immanuel Baptist Church in Little Rock. Immanuel hosts City Center Conversations, an event series modeled after Socrates in the City, the event series hosted by author and speaker Eric Metaxas. An April 9 post by City Center Conversations on Twitter billed the forthcoming event with Strauss as "a fascinating conversation about the relationship between Christianity & science!"

Strauss -- a professor with the University of Oklahoma at Norman since 1995 -- conducts research on ATLAS, a particle detector that is part of the Large Hadron Collider at the European Organization for Nuclear Research -- the institute known worldwide as CERN. The center is in charge of the world's largest particle physics laboratory near Geneva.

Design, he believes, is one of two parts in which one can see the "soul of the Creator."

Strauss said changing the mass of the particles that comprise quarks -- a form of particle smaller than protons, which are smaller than atoms, or subatomic particle -- by just 2 percent or 3 percent would begin a chain of events that would prevent the formation of carbon -- and prevent life on Earth.

The second aspect, Strauss said, is a stark difference between the subatomic world and the macroscopic world -- the world that cannot be observed versus the world that can be seen by the naked eye or through magnification: particles can be in two places at once, and pass through barriers such as walls.

"When that happens you get all these really bizarre and creative features," Strauss said. "It turns out that again those features ultimately are required for our existence, so to have this amazing creativity of creating a subatomic world that's almost completely unlike anything we're familiar with, but yet ultimately it's required for our existence. And that to me just is mind-boggling."

"Growing up, I was taught that the record of the Bible, the narrative of the Bible, it gives us a true understanding of the nature of God and of reality," Strauss said. "But I'm a skeptic. Scientists are skeptics, and skeptics don't accept things at face value."

Strauss spent much of his young adult life investigating what he had been taught as a child as part of the evidence-based approach he takes in life.

When it came time to attend graduate school, he applied to a graduate program for physics and to Dallas Theological Seminary, and ultimately attended school to further study physics.

He gives public talks on average more than once a week on science and God, and said there is a steady interest in the intersection between religion and science from his students and the community.

There are places, Strauss said, where physics directly intersects with religion -- such as carbon dating the Shroud of Turin, otherwise known as the burial cloth of Christ -- and instances where more abstract concepts are discussed, but he tries above all to be an arbiter of information when it comes to the topic and stresses civil conversation.

"I try to help other people on their journey. ... I believe what I believe is true, but everybody has to decide [what is true] for themselves," Strauss said. "So I kind of look at myself as someone who can give some insight to people ... and let them see what they want to do with that, and whether they think there's viability to what I believe, and I do it in a topic that there's always controversy.

"There's controversy for scientists who don't think religion has any place in this controversy [and] from religious people who think that science is also somehow in conflict with biblical teachings or something. So I like to joke that I get flak from both sides."

Strauss has written a book on science and Christianity called The Creator Revealed: A Physicist Examines the Big Bang and the Bible, a self-published work that is scheduled for release this summer. Publishers rejected his book with the explanation that a book on science and religion written for the general public would not sell, but Strauss said he's often surprised to cross paths with people who have some general knowledge or interest in physics.

For more information about Michael Strauss, visit michaelgstrauss.com; tickets and details about City Center Conversations can be found at citycenterconversationslr.org.

*CORRECTION: Biologist and paleontologist Stephen Jay Gould is not a Nobel Prize laureate, as described in a previous version of this article.