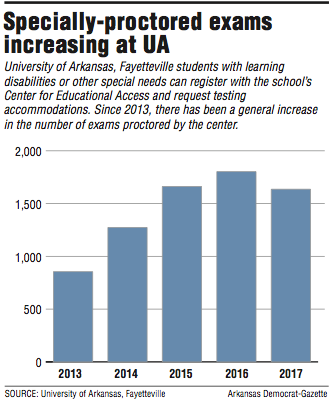 FAYETTEVILLE -- Rising numbers of students with a range of disabilities are seeking out testing accommodations at the University of Arkansas, Fayetteville, with specially proctored exams increasing by more than 90 percent over the past four years.

But the increasing demand also poses a challenge to schools like UA. Limited space means rooms across campus are pressed into use as testing locations, especially during finals week, despite a dedicated test center for students with disabilities that opened in 2012. End-of-semester exams for UA begin today.

"We use all of our space during finals," said Laura James, director of UA's Center for Educational Access, describing how her own office as well as the offices of other center staff commonly serve as exam rooms.

Yearly numbers released by UA show 1,636 final exams last year proctored by the center, up from 855 final exams in 2013.

Not included in the exam totals are testing accommodations provided by faculty -- a common occurrence, said UA spokesman Scott Flanagin.

Academic accommodations can involve students receiving extra time on exams, most frequently 1.5 or 2 hours for every hour typically allotted, James said. Less commonly, students may also take exams with the use of assistive technology, such as a computer program that translates text into audio. In 2017, 229 final exams were taken with assistive technology.

Bryn Smernoff, a UA sociology major set to graduate this month, said the crunch for space is felt by students who make use of the center, sometimes referred to as the CEA.

"They've had this overcrowding situation that really has almost deterred me from scheduling my exams with the CEA for finals because it is such an anxiety-provoking situation," said Smernoff, who is from the Dallas area.

Other sites used to host final exams include meeting rooms in the student union, library rooms and rooms in the building that houses offices for UA's top administrators, Flanagin said in an email.

Smernoff described showing up at a specific time and location, then, after waiting, being led with other students to the exam room only to find it already occupied. Another time, she said she took an exam in a room exposed to loud noise coming from kitchen workers in the Arkansas Union.

Smernoff said she was diagnosed in the second grade as having dyslexia, a learning disability characterized by having difficulty reading or interpreting symbols accurately and fluently. She talked about the need for an alternative testing option compared with the normal locations for final exams.

"Distractions are huge," Smernoff said. "When you're in a big lecture hall, when you're the slowest one to take the test, and everybody is getting up to turn in their Scantron [test form] and shuffling around the room, it really takes away from the focus and concentration that is required if someone has a disability."

Faculty members sometimes choose to provide the accommodations, and Smernoff described one professor "who had us taking exams in her office." Smernoff said the setting "was very distracting."

Smernoff said she thinks UA is trying to accommodate students for their final exams but should "build a bigger testing center or at least figure out a different process."

"We collaborated with the Office of the Registrar and academic departments/faculty across campus to identify classrooms available during finals week that could accommodate CEA students who only require extra time, breaks and/or distraction-reduced testing environment and are enrolled in some of our larger courses," Flanagin said in an email.

Students with a disability can register with the Center for Educational Access, with most seeking some sort of academic accommodations that can include access to the lecture notes of other students or permission to audio-record lectures, according to James.

"Talking to our colleagues around the country, we see these increases everywhere," Axelrod said.

Smernoff said she has made use of note-taking accommodations, and said she had no difficulty registering with the center.

Apart from finals, "I don't have issues with the testing center any other time," Smernoff said.

James explained that students registering with the center are reviewed on a case-by-case basis, with decisions about accommodations involving "the nature of the student's disability, the environmental barriers encountered, and the content of documentation provided," James said in an email.

Other factors include "the student's self-report, professional observations, and recommendations, including those from the physician, psychologist or other clinician, that diagnosed the student's disability," James said, adding that UA also takes into account "reasonable accommodations the student used in previous or similar educational settings."

In explaining why more students are seeking academic accommodations, Axelrod cited amendments in 2008 to the federal Americans with Disabilities Act, which generally made it easier for persons to establish they have a disability, as well as other regulations and laws, such as the federal Individuals with Disabilities Education Act, which he said "requires certain testing and evaluation of students."

The U.S. Department of Education Office for Civil Rights investigates complaints from students that they have been discriminated against because of a disability.

In 2014, UA and the civil rights office entered into a Voluntary Resolution Agreement after a student's complaint. The agreement required "mandatory training for all faculty, staff and administrators employed" in UA's math department, with the training to include "guidance on the appropriate method(s) to provide auxiliary aids and services and academic adjustment for students with disabilities."

As part of the agreement, the university did not admit any fault or liability.

James in an email said that in recent years "each main service area has increased, such as requests for note-taking assistance, accessible digital materials, golf cart transportation and particularly accommodated test proctoring."