Police: 1 killed, at least 4 hurt in multi-vehicle crash on I-30 at Arkansas River bridge 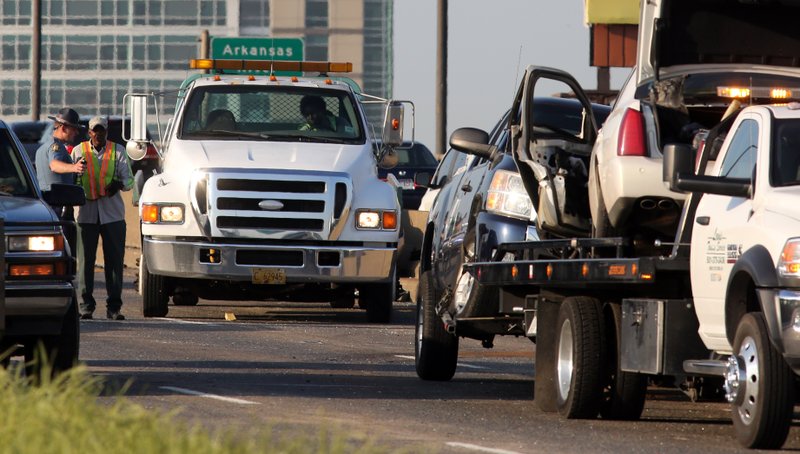 Authorities respond to a multi-vehicle wreck Tuesday, May 8, 2018, on Interstate 30 at the Arkansas River bridge.

A man was killed and at least four other people were hurt in a multi-vehicle crash Tuesday morning on Interstate 30 at the Arkansas River bridge, authorities said.

The wreck happened shortly after 5:40 a.m. on the span, just south of the Broadway exit in North Little Rock, according to Deputy Fire Marshal Dustin Free of the city’s Fire Department.

Police say a northbound 2005 Mazda driven by 24-year-old Davontay Key of North Little Rock struck a railing on the bridge and came to a rest in the left lane.

A 1999 Chevrolet driven by 44-year-old James Allen of Montgomery, Ala., then struck the back of the Mazda, according to the report.

The Mazda was later struck again by a 2005 Cadillac driven by Addy, police said, noting that the Cadillac rotated and struck a concrete barrier before hitting Allen's Chevrolet.

Addy suffered fatal injuries. Also listed as hurt in the crash were Allen and Key as well as two passengers in Addy’s vehicle: a male minor and 40-year-old Raymond Pope of Little Rock.

A fifth person was said to have been injured, though that individual was not identified.

Authorities initially said the wreck involved six vehicles. Four, including a 2011 Chevrolet not mentioned in the crash narrative, were listed in the state police report.

The weather was clear and the highway was described as dry at the time.

Addy’s death was one of at least 142 recorded so far this year in a traffic crash on an Arkansas road, according to preliminary figures.