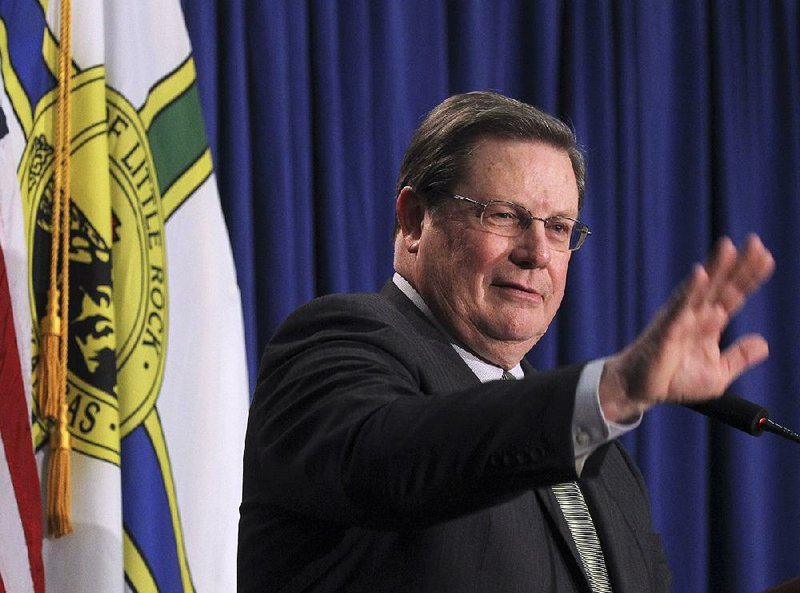 Little Rock Mayor Mark Stodola will announce today that he won't seek re-election this year due to the discovery of a family member's illness.

"A very recent, serious medical diagnosis involving one of my immediate family members has caused me to take stock of the future and make a decision that is best for my family at this time. In light of this new development, I have decided to cap my time as your mayor at the end of this term," he said in an open letter to residents, an advanced copy of which was released to the Arkansas Democrat-Gazette on Monday.

Stodola said he preferred not to go into detail about the personal issue. His family includes his wife, Jo Ellen, and their children Allison, John Mark and Robert. He has two grandchildren.

Stodola was first elected mayor in 2006 and will have served for 12 years when he completes his third term at the end of 2018.

He became the city's first full-time mayor since the switch to the city manager form of government in 1957. All mayors in between then and now had been part time.

Voters approved making the mayor position full time and giving the office the power to veto decisions made by the Little Rock Board of Directors and the power to appoint citizens to the city's various boards and commissions in a 2007 special election.

So far, two people have announced they plan to seek the mayor's position on the November ballot. State Rep. Warwick Sabin and Little Rock banker Frank Scott, Jr. both formed exploratory committees last year to begin raising funds and consider the option of formally filing as a candidate.

Sabin's slogan is "New Energy. New Ideas." He opposed an extension of a school tax and has criticized the 30 Crossing project recommending widening of the Interstate 30 bridge over the Arkansas River, two measures Stodola has supported.

Scott has advocated for infrastructure upgrades, innovation in economic investment and solutions to public safety problems. He has said the city is at a crossroads and requires "an evolving vision and new direction."

Stodola had previously said he was polling more than 50 percent favorability to win re-election this November.

"This has been a very difficult decision and I want to thank all of my many supporters for the faith and confidence you have placed in me. I truly regret disappointing you by not running. While I am confident we would be successful in November, I must absolutely do what is best for my family at this time," he said.

Stodola is a licensed attorney and will return to the private sector after the conclusion of his current term, though he hasn't decided yet where he will work, he told a reporter Monday.

"As for the future, as the old adage goes, 'Once a mayor, always a mayor' so I will continue to find ways to stay involved in building the city I love and have dedicated myself to improving. As for politics, there are important races that occur every two years, so I will stay engaged in the dialogue that will help direct our future," his open letter to the public says.

When asked whether he plans to consider another run for public office in the future, he said, "You never say never."

He started a two-year term this year as president of the National League of Cities, so he will continue representing Little Rock in that role until his term ends at the conclusion of this year.*

Stodola has a long history with the city. He was the city attorney from 1985 to 1990 before being elected as Pulaski County's prosecuting attorney and serving there from 1991 through 1996.

Stodola was prosecuting attorney through the height of the gang wars, when as many as 27,000 reported violent and property crimes were reported in Little Rock.

The Part-1 offenses mandated to be reported to the FBI include homicide, rape, robbery, aggravated assault, burglary, larceny-theft, vehicle theft and arson. The number of incidents has dropped by more than 10,000 since then.

In 1996, Stodola had a failed run for U.S. representative of Arkansas' 2nd Congressional District, ultimately being beat out by Vic Snyder who served in that role until 2011.

When Stodola started his first term as Little Rock Mayor in 2007, he was a managing partner at Catlett and Stodola Law Firm, PLC.

During his time as mayor he has held a number of leadership roles.

He has been a board member of the Little Rock Regional Chamber of Commerce, the Downtown Little Rock Partnership and the Arkansas Arts Center.

He said Monday that overseeing the creation and opening of the Jericho Way Homeless Day Resource Center was one of his favorite moments as mayor.

"It was a very emotional moment for me when we were able to open that up and see that happiness in the people's eyes and the dedication that those volunteers have," he said.

Flipping the switch in 2013 on the new lights on the three Arkansas River bridges was also a highlight, and Forbes naming Little Rock the No. 1 most livable city in the U.S. that year was "a big moment," he said.

Much of his focus has been the renaissance of an area of downtown Main Street that he dubbed the "Creative Corridor," which saw more than $150 million in private sector development as well as grant- and city-funded street projects that included water filtration work and streetscaping. The design won 13 state, national and international awards.

The city's access to arts has been transformed recently with a $70 million bond issue used to redesign the Robinson Center and an increase in the hotel tax that will partly fund the coming renovation of the Arkansas Arts Center, two measures strongly supported by Stodola.

In 2009 he championed a bond initiative that resulted in almost $7 million in improvements to the city's park systems. In 2011 he was a part of the successful campaign to increase the city's sales tax, which resulted in revenue for major infrastructure projects and street improvements.

More than $1.3 billion in new capital investment and more than 7,000 jobs have come to the city through partnerships since Stodola took office, according to his chief of staff, Bryan Griffith.

The city has won three national City Livability Awards for the Animal Village, the Sidewalk Re-entry Program and the Summer Youth Employment Program. Little Rock received the Small Business Advocate Award from the U.S. Conference of Mayors in 2017.

"I am blessed to be a part of this city and our many accomplishments and most happy to have been a part of it along with my hardworking colleagues on the City Board of Directors. Thank you for the opportunity to serve. Jo Ellen and I will be forever indebted to you," Stodola concluded in his letter.

*CORRECTION: Little Rock Mayor Mark Stodola’s term as president of the National League of Cities will end at the conclusion of this year. The end of the term was incorrect in a previous version of this article.