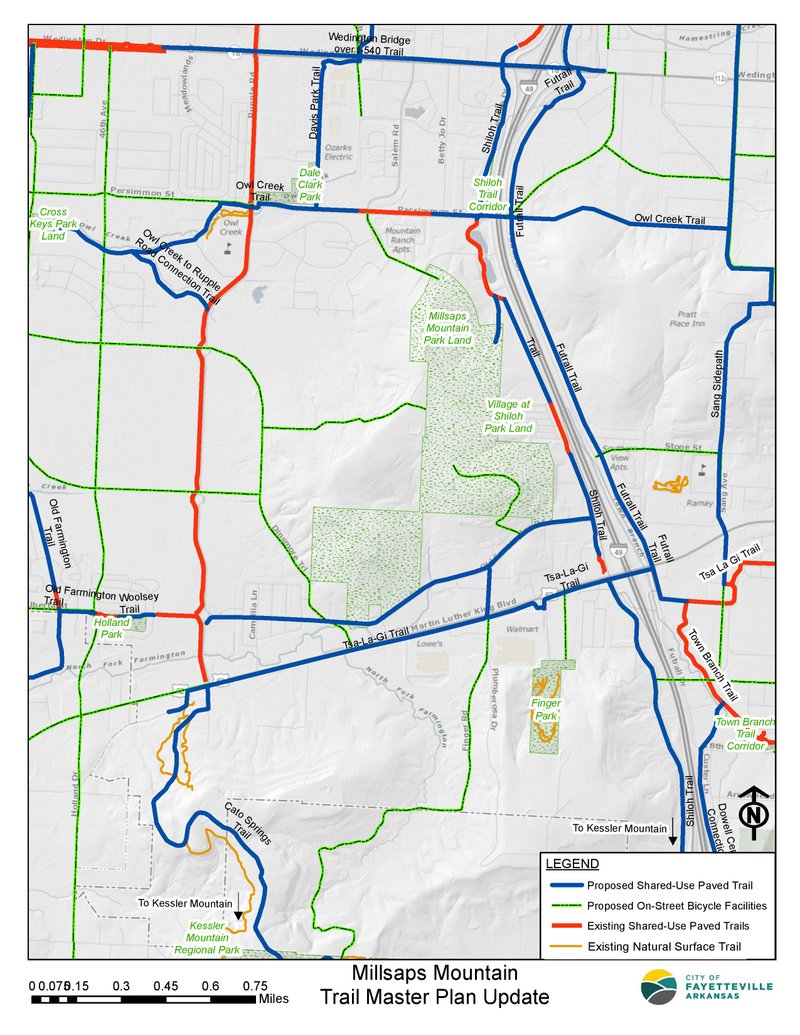 Courtesy of the City of Fayetteville A map depicts proposed and existing trail connections near Millsaps Mountain in Fayetteville.

The Active Transportation Advisory Committee forwarded an amendment to the city's trails plan that includes four new trail and bicycle routes connecting to Millsaps Mountain west of Interstate 49 and Martin Luther King Jr. Boulevard. The plan will go before the Transportation Committee and Parks and Recreation Advisory Board before heading to the City Council for approval.

The proposed amendment to the city’s trails plan to include connections to Millsaps Mountain is scheduled to appear before the following bodies:

• Parks and Recreation Advisory Board: June 4

Photo by Courtesy/WALTON FAMILY FOUNDATION
A map shows the preliminary plan for pathways and amenities at Millsaps Mountain in Fayetteville.

The change to the trails plan shows the city's willingness to make the connections, but doesn't allocate money or set in stone a timeline for construction, committee members said Wednesday.

The city acquired the 228 wooded acres at Millsaps Mountain in February with a 50-50 matching grant from the Walton Family Foundation. The grant will cover half, with a loan from the foundation to the city covering the other half. The city will pay back the loan interest-free over five years, bringing the purchase to about $3.3 million.

City officials hope to bring a world-class mountain biking and recreational area to the acreage, boosting the economy and preserving the environment. Part of the deal with the foundation entailed connecting pathways through the mountain to the city's larger trails system.

Erin Lowrey, who lives south of the mountain, said she welcomed plans for a trail along Old Farmington Road. Pedestrians, bicycles and cars all pack onto the narrow stretch as it is, and Lowrey worried adding the recreational attraction with just a road and no trail to the south would make matters worse.

"They read my mind," Lowrey said.

An on-street bike path also would extend north from Old Farmington Road to the mountain. Right now there's an unnamed road with a few houses around.

One other connection would go at the northern end of the mountain, creating a spur from Shiloh Trail.

Board Member Jerry Bailey said establishing the connections will help make the mountain biking facility an authentic experience. Travelers will be able to go between the mountain, lodging and other areas of the city without ever getting into a car, he said.

"We need to make sure that when people come here they're able to do everything they want to in that corridor by foot or by bike," Bailey said.

A preliminary plan with a 6-mile looped mountain bike race course and 1-mile practice course has been drafted but not finalized. The draft also includes a cleared area for spectators at the top of the mountain and places for vendors, camping, event registration and parking.

There is no timeline yet on when a fully developed Millsaps Mountain recreational area may open to the public.