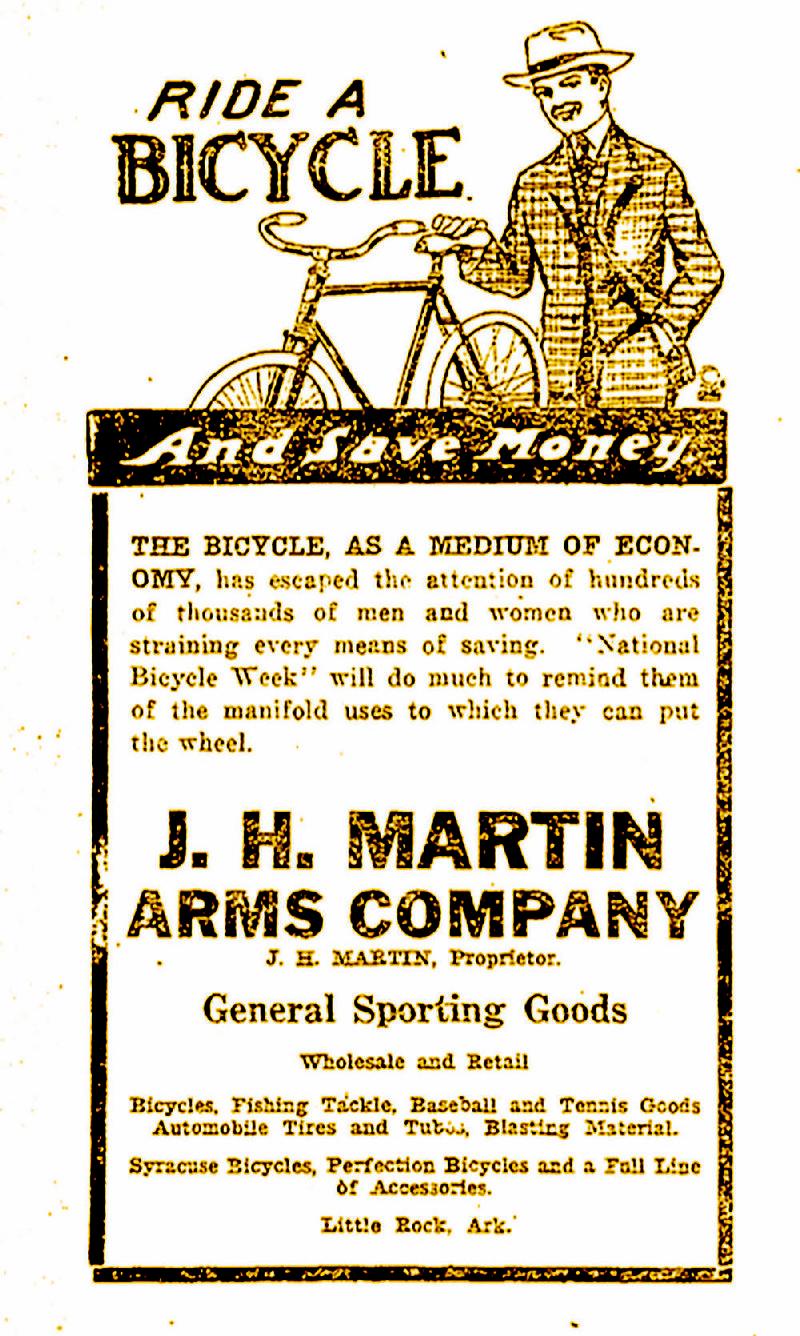 This ad for a bicycle shop appeared in the May 5, 1918, Arkansas Gazette.

Newspaper archives from 100 years ago are full of stolen and missing bicycles.

The Police Department has found Willie's bicycle, but has lost Willie's name. Willie thought he lost his bicycle Wednesday night and it is very natural that he thought so, for, when he returned to the place where he had left it it was not there.

It had been parked by the curb in front of the Mercantile Trust Co. building, Second and Louisiana streets in Little Rock.

Last night Night Watchman Allen, who looks after the Mercantile Trust Company building and other buildings in that section, reported to police headquarters that he had found what he thought was an abandoned bicycle and had carried it inside the building. The owner will receive his wheel if he calls for it at the bank.

And not only his wheel. He'd get the whole bike. "Wheel" was a synonym for bicycle in 1918.

The jury in First Division Circuit Court yesterday returned a verdict of guilty against Eddie White, negro, charged with grand larceny, and placed his sentence at one year in the penitentiary. White stole a bicycle. In his defense, White testified that officers of the law "beat a confession out of him." Several officers testified that White admitted his guilt.

I hope there was a good deal of backstory left out of that report. Bicycles are great, but a year in prison?

Elsewhere in the archives from February 1918, another man convicted of stealing a bike had the relatively better fortune of appearing before Little Rock Municipal Judge Woodruff. He ordered Frank Green to pay $25 and spend six months on the county penal farm.

Bicycle thieves stand before different courts throughout the old Gazette archives. It makes one wonder. Was justice capricious? Were penalties unevenly applied? Did the newspaper leave out crucial details? Possibly the man sentenced to a year in the pen had also stolen someone's cow.

Jesse Coppage, negro, was convicted of grand larceny by the Petit Jury in First Division Circuit Court yesterday and his punishment was fixed at one year in the penitentiary. He was charged with stealing a cow from James Alex February 15. He pleaded guilty to another charge of grand larceny, that of stealing a bicycle.

Those old newspapers are also treasure troves of bike wreckage. People receive numerous bruises, deep gashes, broken arms, dislocated kneecaps, transport to the hospital, hemorrhage of the brain. They collide with roadsters and flivvers and other bicycles. They are sideswiped. They are run over.

They were coasting down the bridge in daylight. They were pedaling along Broadway after dark.

One was trying to pass a parade of Shriners between the curb on Main Street and the streetcar tracks:

Between men marching and autos parked at the curb there was little room to pass. The wheels of the bicycle skidded and down came the boy.

By 1918, the rise of the callous auto driver had eased some of the heat of public opprobrium off the once reviled, reckless wheelman.

On May 9, 1918, the Gazette version of New York sportswriter George E. Phair's column Breakfast Food reacted to word that 200 of his fellow citizens had formed a bicycle club. It reminded him that an ancient malady had not yet been extinguished.

Years ago this malady held the nation in its grip. It attacked men, women and children, rich and poor alike, regardless of race, color, creed or previous condition of servitude. It infested the highways and the byways, and no home, be it ever so humble, was complete without at least one bicycle.

When the epidemic was at its height, he quipped, the bicycle was a mark of social caste -- having pushed aside the plush-covered album on the marble-topped table in the front room.

No family could rear its proud head unless it owned a bicycle.

Back then, "scorchers" swooped down the boulevard at the terrifying speed of four knots per hour, causing ill-fated pedestrians to flee for their very lives.

Imagine a scorcher on the boulevard today! The crossing cop, when he had recovered his speech, would hold up his hand and say: "Here, you! Get off the street! Ain't you afraid somebody'll run over you? Get over there on the sidewalk, where you'll be out of danger!"

A reminder just so no one becomes confused, under today's Little Rock municipal code Sec. 32-494, "Riding on sidewalks," it is illegal to bicycle on a sidewalk in a Little Rock business district. The reason is, pedestrians. But also, bikes are not safer on the sidewalk than in the street. Sidewalks end at intersections, and intersections are places where too many bicyclists have died.

But then as now, bicycles also were delicious fun.

Here's the All Over Arkansas column, through which Gazette editors picked at bits from other newspapers. From the Nevada County Picayune:

Some of the people of Bodcaw were very much frightened one day last week. Some of the best people of Bodcaw thought the millennium was at hand, as it was traveling at the rate of 190 per minute, but to their surprise it was Miss Nora Brown operating a bicycle. There is said to be but one person in town her equal. The first part of his name is Mr. P.H. Herring.

Does that item suggest to you that the Picayune was calling out lovebirds? Hmm.

Cecil Haney, 11-year-old messenger boy for the Western Union Telegraph Company in North Little Rock, will not be compelled to pay half of his salary each month for the rent of a bicycle for the month as a result of the activities of his friends, who yesterday morning circulated a petition to buy him one. In two blocks of the city a total of $15 was raised and a bicycle will be purchased for him today.

Haney's father drowned in the river. He and his brother were supporting their mother and several sisters. He had been paying $7.50 a month to rent a bicycle for his job.

A toy, a tool, transportation. Foil of the fool, delight of the child, steed of the hardy, friend of the poor. Then and now.