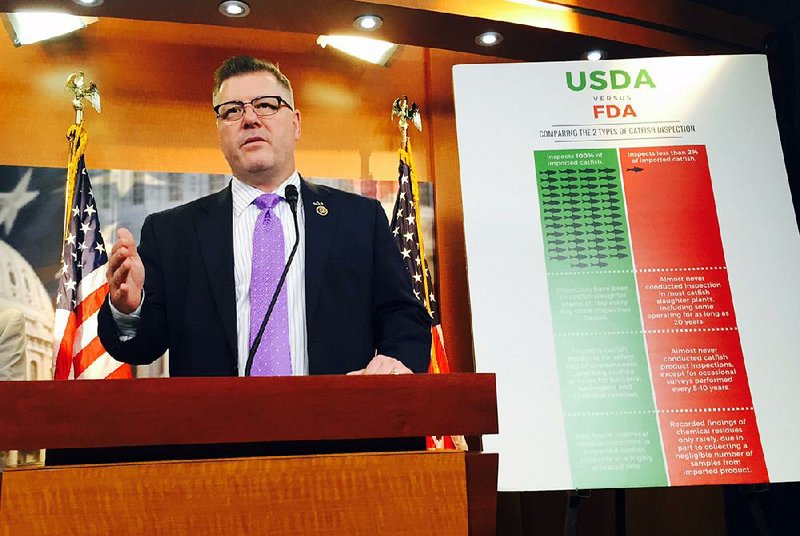 U.S. Rep. Rick Crawford has dropped the world's most widely used social media platform, but he's adding another way for people to reach out and speak up.

The Jonesboro Republican now invites constituents to contact his office by text at (870) 292-6747. They're no longer able to reach him via Facebook Messenger.

Crawford, who serves on the House Intelligence Committee, decided to cut ties with Facebook after news surfaced that the company had failed to properly safeguard users' personal information.

His office Facebook page, he said, was deactivated on April 23.

Crawford informed Facebook CEO Mark Zuckerberg of his decision in a letter dated May 8, and expressed concerns about "the privacy of my constituents, and their exposure to foreign misinformation."

He specifically mentioned political consultant Cambridge Analytica's use of Facebook users' data as well as efforts by Russians to affect the outcome of American elections.

Those who try to visit the 1st District congressman's official Facebook page are greeted with a message stating: "Sorry, this content isn't available right now. The link you followed may have expired, or the page may only be visible to an audience you're not in."

Constituents who text Crawford will be asked for their name and where they live. Their messages will be acknowledged promptly, a spokesman said.

In an interview, Crawford said texting cuts out the middleman and eliminates the advertising.

"I really started thinking about this last year because of all of the commercialization of the [Facebook] platform," he said. "We're trying to engage our constituents in a nonpolitical environment and yet they're really inundated with politics so I wanted to change that and do away with that."

The texting line was unveiled last week, and is still in the early stages..

The messages pop up on computer screens in the office.

With some social media platforms, it's hard to tell who is a constituent and who isn't, Crawford noted.

With text messages, Crawford hopes it'll be easier to identify Arkansans, answer their questions and hear their concerns.

"What we want to do is maximize our efforts and focus on our constituents, as opposed to having to filter through a whole lot of noise," he added.

Crawford launched the new text-message system with the help of OpenGov Foundation. The tech company describes itself as a "fiercely apolitical nonprofit dedicated to serving those who serve the people in America's legislatures."

"What Mr. Crawford is doing is incredibly groundbreaking and long, long, long overdue," he said.

In Washington, lawmakers struggle to keep up with all of the letters, emails, voice mails and Twitter messages they receive, he said.

"When Congress was founded, the first Congress, each member of the House of Representatives represented about 29,000 constituents. Today, every member of Congress represents between 750,000 and 800,000," Kraft said.

Thanks to technology, it's never been so easy or so cheap for Americans to send a message to Capitol Hill.

Text messaging will help Crawford to cut through the noise and connect with actual constituents, Kraft predicts.

The new system is in its early stages, Kraft said.

"This is a prototype and it will grow and it will develop and it will improve with the direct usage and impact of Mr. Crawford, his staff and, most importantly, the constituents who are on the other side of the text message," he added.