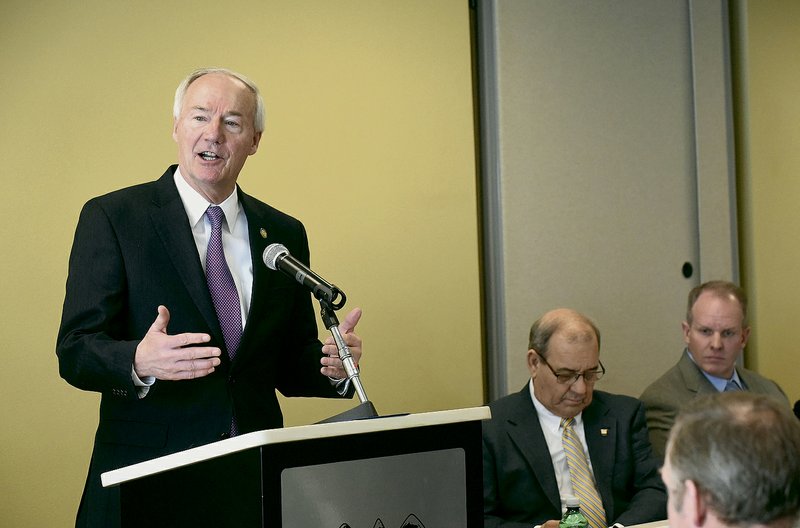 Family members and executives connected with Arkansas' two casino gambling-style establishments -- Oaklawn Racing and Gaming in Hot Springs and Southland Park Gaming and Racing in West Memphis -- are among the largest donors so far to Gov. Asa Hutchinson's re-election campaign.

Southland Park's Jacobs family and Oaklawn's Cella family, plus executives and spouses, have contributed at least $113,825, according to campaign finance disclosure records filed with the Arkansas secretary of state.

Almost all the campaign gifts -- all but $6,400 -- came in January and February this year.

Among groups that contributed at least $25,000 since January 2017, all gave to Hutchinson, records show.

• Family members and executives with First National Bank of Paragould, at least $45,700.

• More than a dozen nursing home owners and employees from cities including Fort Smith and Melbourne, at least $43,800. 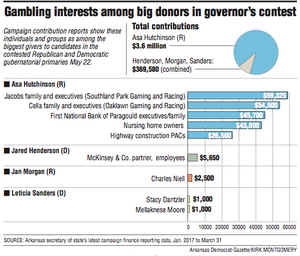 Hutchinson's campaign contributions dwarf those of his May 22 Republican primary opponent, Jan Morgan of Hot Springs, and the two Democratic primary contenders, Jared Henderson of Little Rock and Leticia Sanders of Maumelle.

The incumbent governor has amassed $3.6 million in donations and carry-over, about 10 times more than the other three other candidates combined, according to campaign finance disclosure records filed through April 15. The next filing deadline is today.

In the Republican primary, Morgan reported raising $85,492 so far against Hutchinson.

The Libertarian Party's primary race for governor is uncontested.

Asked about the size of campaign contributions from the two gaming and racing interests to the incumbent governor's campaign, Hutchinson spokesman Jamie Barker wrote in an email that "less than five percent" of total contributions "from individuals who play an important role in our tourism economy is nothing out of the ordinary."

"The governor markets Arkansas tourism every day and Hot Springs and Crittenden County have attracted thousands of outside visitors for years," Barker wrote.

The newspaper also asked about the timing of 95 percent of the gambling-interest donations, received by Hutchinson's campaign in January and February this year.

About the same time, in late February, Southland and Oaklawn joined another group's effort to place a constitutional amendment before Arkansas voters that would legalize stand-alone casinos in four places in the state.

The Driving Arkansas Forward committee's proposed amendment would authorize casinos to raise more money for highways. The amendment would place one casino each near Pine Bluff and Russellville, one at the Jacobs family's Southland Park and the fourth at the Cellas' Oaklawn.

"The governor has played no role and has no role officially or unofficially in the hypothetical constitutional amendment that has yet to be approved by the attorney general," Barker wrote.

Attorney General Leslie Rutledge has rejected ballot language for the current proposed amendment four times, and she also rejected a similar amendment proposed by Driving Arkansas Forward that did not include casinos at Oaklawn and Southland.

Corporate spokesmen for Southland Park and parent Delaware North Companies Inc. of Buffalo, N.Y., and the Cellas' Oaklawn and Southern Real Estate of St. Louis did not respond to several calls for comment.

Arkansas campaign contribution laws no longer allow corporations to contribute directly to political races. Individuals, PACs and others have a contribution limit of $2,700 per candidate, per race.

To give much larger amounts usually requires individuals to coordinate their $2,700 checks, which often flow to candidates at about the same time, campaign records show.

Contributions to Hutchinson from the Jacobs family of Southland Park came from 11 family members or executives who gave the $2,700 maximum, usually for both primary and general election races, Hutchinson's campaign filings show. Several family members listed their employer as Delaware North.

The website of Delaware North Companies Inc. describes it as "one of the world's largest privately held companies" and cites Forbes magazine. The conglomerate operates food service and hospitality ventures on four continents, the website says.