A panel of private citizens Tuesday formally approved 3 percent raises for state government elected officials over the objections of one official who doesn’t want his pay increase.

The pay bumps — for all seven constitutional officers, 193 judges, 28 prosecutors and 135 state legislators — will cost the state $1.2 million annually, according to the Arkansas auditor’s office.

Lt. Gov. Tim Griffin asked the Independent Citizens Commission in a letter to exclude him from the across-the-board raises, but commissioners unanimously approved the salary increases — including for Griffin — during a brief teleconference Tuesday morning.

After the raises were approved, Griffin sent Auditor Andrea Lea a letter to request that she withhold his raise, but a Lea spokesman, citing a 2009 opinion from then-Attorney General Dustin McDaniel, said Lea would honor the commission’s resolution. 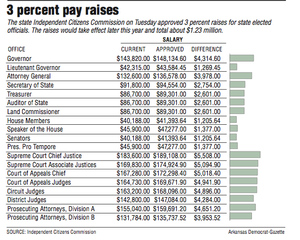 The lieutenant governor is the only part-timer among the constitutional officers. None of the other officers have protested their raises.

The seven-member commission was created by constitutional Amendment 94, approved by voters in 2014 to review and raise the pay of state elected officials.

This is the second-straight year the commission has doled out salary increases after declining to do so in 2016.

Attempts to contact Ross, the chairman, on Tuesday weren’t successful.

During their nine-minute Tuesday meeting, the commissioners briefly acknowledged Griffin’s letter and two other public comments on the raises.

The two public comments objected to the raises. The first posted an excerpt from a news article about a judge who sentenced a former sheriff’s deputy to probation after he pleaded guilty to stealing cash.

The second comment, attributed to Sidney Hewgley, opposed the raises, saying the officials knew what their salaries would be when they ran for office.

“Any raises in salary should be posted in the years before the date for filing for a specific position,” Hewgley wrote.

“Therefore a person would know what the salary would be for the duration of the term for which they were elected. These proposed raises are ridiculous, especially given the salaries of the rank and file.”

The pay raises will go into effect in the next few weeks — 10 days after the auditor’s office receives the commission’s formal resolution.