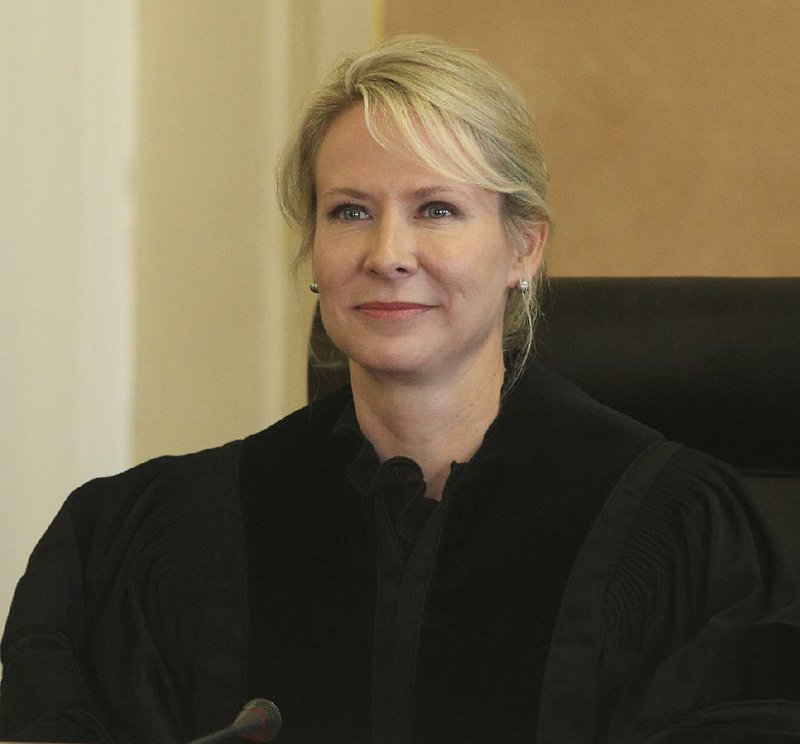 Pulaski County Judge Mackie Pierce was assigned to Supreme Court Justice Courtney Goodson’s lawsuit in Washington County Circuit Court on Thursday, after all the regular judges in that court recused.

The appointment was made by Supreme Court Chief Justice Dan Kemp.

As of Thursday afternoon, no hearings had been scheduled to consider the status of a restraining order that had been placed against several northwest Arkansas TV stations that had been airing negative ads about Goodson.

The judge who issued that order Monday, Doug Martin, later recused after it was reported that he had financial ties to Goodson’s husband, John Goodson. Still, the order remained in place after his recusal.

Tribune Broadcasting Fort Smith LLC on Thursday asked that Washington County Circuit Judge Doug Martin's order temporarily preventing some stations from airing the ad be dissolved. Martin issued the order in response to a lawsuit from Justice Courtney Goodson, who's being criticized by the Judicial Crisis Network's ad.

Goodson has filed two other lawsuits trying to block the ad from airing.

FAYETTEVILLE — Every circuit judge in Washington County recused Wednesday night from the lawsuit filed by state Supreme Court Justice Courtney Goodson to block broadcasters from airing some negative campaign ads, according to a letter to the state Administrative Office of the Courts.

Washington County Circuit Judge Stacey Zimmerman received notice Wednesday that Circuit Judge Doug Martin had recused in the case, her letter to the administrative office says. She also heard from attorneys of those seeking to overturn the ban, the letter says.

“I then contacted the other circuit judges in our district, and the remaining five of us disqualified ourselves from hearing the case,” the letter says. “Judge Bryan has already recused,” referring to Circuit Judge Beth Bryan.

Martin ordered the stations to stop airing negative ads about Goodson after the lawsuit was filed Monday, and he left that ruling in place when he recused. Attorneys for the companies affected argued in a motion filed with Zimmerman on Wednesday night that Martin’s recusal leaves an unconstitutional order in place at the height of the campaign season for nonpartisan judicial elections, which will talk place Tuesday. Early voting began May 7.

Goodson is running for re-election as an associate justice to the Arkansas Supreme Court against Kenneth Hixson and David Sterling.

The motion for the communications companies asks that a special judge be appointed as soon as possible and for that appointee to lift the ban as soon as the appointment is made, according to a copy of the motion provided by the Washington County Circuit Clerk’s office Thursday morning.

Amy Martin was also a one-time contributor to Courtney Goodson’s campaign. W.H. Taylor, an attorney whose gifts to Goodson were scrutinized in one of the attack ads, also donated to Doug Martin’s campaign in 2014.

Goodson’s attorneys asked Martin to recuse in a court motion after the newspaper report.

The American Civil Liberties Union of Arkansas released a statement Wednesday calling for groups such as the sponsors of the anti-Goodson ads, the Judicial Crisis Network, to be forced to disclose their donors, but it said the group’s speech should still be protected under the U.S. Constitution.

“It’s well understood that you can’t get this kind of injunction without, as I understand, any real hearing,” said Eugene Volokh, a professor of First Amendment law at the University of California, Los Angeles, School of Law. He called Martin’s ruling “clearly unconstitutional.”

The Judicial Crisis Network issued a statement Wednesday calling Martin’s order a censorship of the group’s First Amendment right to free speech. The conservative-leaning group is based in Washington, D.C., and has spent hundred of thousands of dollars in ads during this year’s Arkansas Supreme Court race, as well as other recent Arkansas campaigns.

The group’s recent ads focused on expensive gifts Goodson received from lawyers with business before the Supreme Court — Goodson says she has recused in all cases involving gift givers — and a pay raise sought by the Supreme Court last year, which the ads depict as being requested solely by Goodson.

“You can’t make this stuff up,” the group’s policy director, Carrie Severino, said in a statement. “Judge Martin should be standing up for free speech instead of trying to protect his campaign donor and buddies.”

Lauren Hoover, Goodson’s attorney, said she was happy with Martin’s recusal because it would allow the case to continue. She noted one cable provider in Northwest Arkansas, Cox Media, had already agreed to pull the ads before Goodson’s suit being filed.