How Jaylen Barford measured, shot at the NBA Draft Combine 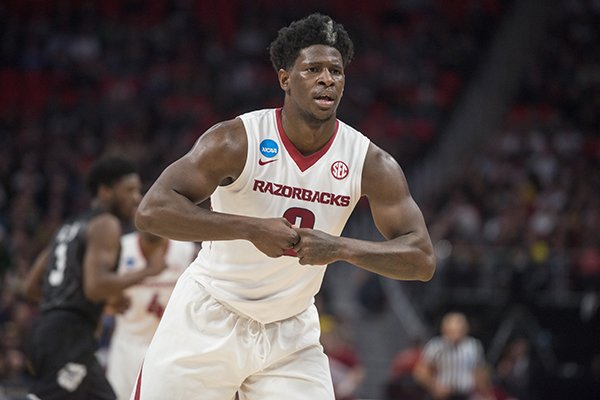 Arkansas guard Jaylen Barford reacts after making a shot during a NCAA Tournament game against Butler on Friday, March 16, 2018, in Detroit.

Barford starred for Arkansas in two seasons and made momentous leaps toward earning a shot at an NBA roster spot during his senior season. Most notably, Barford improved his 3-point shooting from 26.6 percent as a junior to a remarkable 43.3 percent in 2017-18.

Barford’s yearly points above median (PAM) figure - a calculation of how many additional points a player scores when compared with what a "median" player would have scored with those shot attempts - of 68.0 on 3-point shots was best on the team last season, bettering Daryl Macon’s mark of 61.1. No other Razorback finished with a PAM higher than 18.0 on 3-point attempts.

He led the Razorbacks in scoring at 17.9 points per game and recorded a 20-point, 10-rebound double-double on Senior Night against Auburn. Barford was a first-team All-SEC guard last season as voted on by the league’s coaches, and was named Most Valuable Player of the annual Portsmouth Invitational last month.

Here are Barford’s anthropometric stats from the combine:

Note: Barford was one of only four players to record a number higher than 10 percent, with the others being Missouri’s Jontay Porter (13.85), Villanova’s Omari Spellman (13.75) and Purdue’s Isaac Haas (12.55). On the other end of the spectrum, Kentucky’s Shai Gilgeous-Alexander had 3 percent body fat. Average body fat among the players was 6.62 percent.