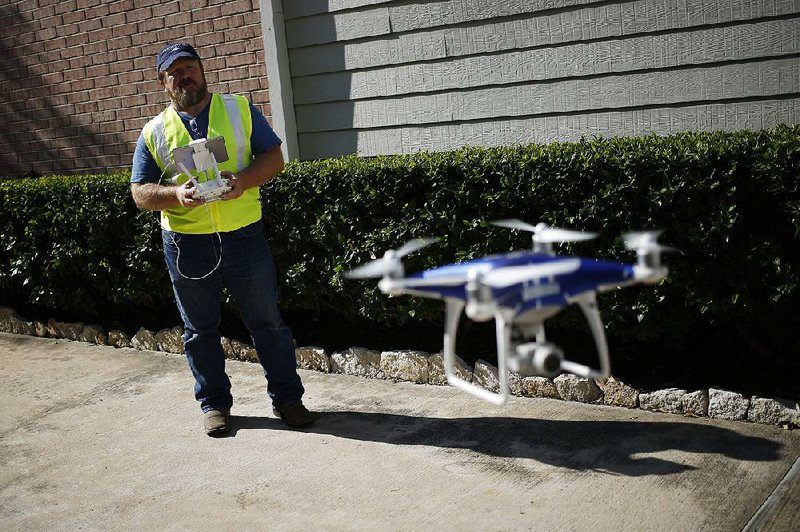 Sean Duff operates a Da-Jiang Phantom drone as he carries out a property inspection in September in Houston after Hurricane Harvey’s damage.

Andy Trench made $2,000 a day in 2015 taking sky-high photographs along the East Coast with a drone he made himself. Now, that same work fetches about $175.

"It's apparent that a lot of this industry is a race to the bottom," said Trench, a Rhode Island entrepreneur who has been operating remote-controlled aircraft for more than a decade.

Three years after federal regulators began allowing commercial drone flights, the fever to cash in has turned into a pitched battle for business. Prices for collecting airborne data have plummeted in a flood of competition equipped with cheap, high-tech devices that practically fly themselves. That's pressuring operators, while handing customers new opportunities for inexpensive drone inspections, pictures and other services.

The challenge for providers is to figure out how to profit. Companies are rushing to carve out turf in an industry that's convulsed by fast-paced breakthroughs in sensor capabilities and machine learning, while at the same time being throttled by slowly evolving regulation focused on keeping the skies safe.

General Electric Co., Intel Corp., Verizon Communications Inc., and well-funded startups including PrecisionHawk and Airware are among drone companies vying with scrappy, low-overhead entrepreneurs that helped give birth to the industry. They're fighting over a pool of customers still limited by laws restricting unmanned aircraft to short daytime flights below 400 feet.

If smaller drone pioneers want to survive the shakeout, they'll have to figure out how to compete in a field increasingly tilted toward larger companies with deep pockets that can buy expertise to build their businesses more quickly.

More companies may fall out if their business model depends on the Federal Aviation Administration allowing long-distance flights. Drones are currently restricted to flying within sight of their human pilots, and companies that are more limited under current rules are likely to run out of cash before the agency makes any significant change, said Brandon Declet, chief executive officer of Measure.

In a step toward expanding the use of drones, the FAA on May 9 announced 10 teams led by state and local governments to test long-distance flights and deliveries.

Drones are enabling industrial companies to slash 25 percent off the cost of infrastructure inspections, which in the past required humans flying planes and helicopters, or dangling in harnesses beneath bridges. The price charged for a drone inspection of an industrial site has dropped to about $5,000 -- a third of what it was two years ago, said Alex Trepper, who founded GE'S new venture, Avitas Systems.

Trepper estimates that the "intelligent inspection" market for the power, rail, aviation and oil-and-gas industries currently tops $27 billion globally, with the new business of analyzing the collected data adding another $20 billion.

"Even with prices dropping, the sheer size of the market is attracting lots of people into the business to offer basic services like roof inspections or aerial photography," said Phil Finnegan, an industry consultant with the Teal Group. "There are very low barriers to entry."

Technology itself is proving to be one of the biggest competitive threats. As drones become more automated and easier to operate, some would-be customers are deciding to buy their own aerial robots to fly themselves.

That's driving companies such as Avitas to think beyond the aircraft. "We're much more interested in the data and data analytics," Trepper said.

Avitas plans to offer automated data analysis to detect corrosion and cracks in surveys of infrastructure like storage tanks -- and even predict where a railroad track might fail, Trepper said. The startup also can leverage its parent's market clout by offering its services to GE's customers.

Measure is rolling out a franchise of trained pilots to win work that includes inspections, law enforcement support and filming sport events. Data analysis is done at the company's Washington headquarters.

The company aims to create a recognized brand capable of fending off lowball pricing from one-person outfits that can jump into the business for less than $1,000 -- the cost of a small drone and a remote pilot's license, said Declet, Measure's CEO.

"Having a highly skilled pilot at the controls is important when you're inspecting a $15 million wind turbine or you're flying over a newly commissioned solar farm," Declet said. "No one wants to take any risks when it comes to aircraft falling or crashing into critical infrastructure."

Small outfits such as that of Trench's operation in Rhode Island are adjusting, too. His answer is to relaunch his drone business as Vertspec, a provider of low-cost inspections for infrastructure such as mobile-phone towers, wind farms and power transmission lines.

Trench, 37, who started building his own drones as a hobby 16 years ago, is taking advantage of increased automation to reduce the cost of hiring operators. To compete with the big companies, he's subcontracting for data analysis to third-party software companies.

"I have lower overhead than they do and I'm more agile on development," Trench said. "The large companies up in the castles might be surprised when they get undercut by small ones." 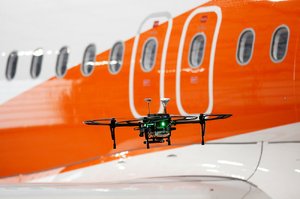 Photo by Bloomberg News/LUKE MacGREGOR
A drone flies around an Airbus passenger jet during a demonstration at an innovations event in September at London’s Gatwick airport.