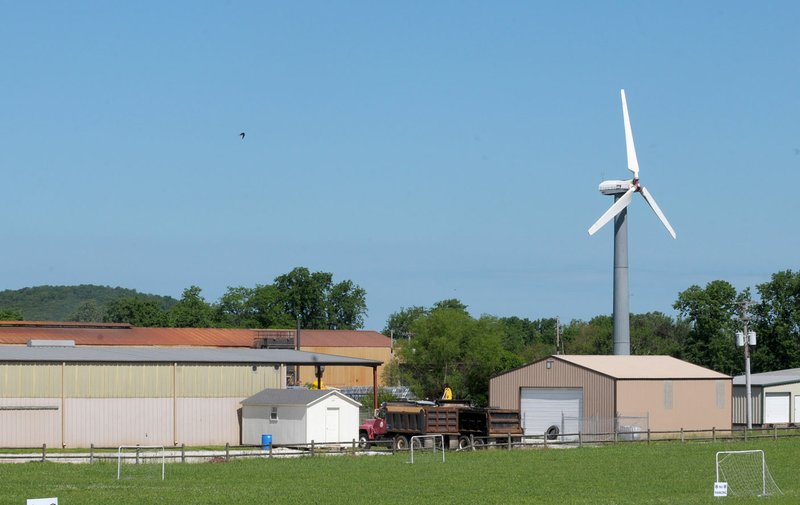 NWA Democrat-Gazette/DAVID GOTTSCHALK A wind turbine sits still Thursday, May 17, 2018, near Industrial Park Road in Prairie Grove. The solitary turbine has mot worked for several years after what the owner suspects was a lightning strike around 2010, but it spun for years before then. Arkansas is generally seen as an unsuitable place for wind energy, but some have still tried to generate power from wind.

PRAIRIE GROVE -- The 100-foot wind turbine near the western edge of town stands as a guidepost, elaborate bird perch and lonely symbol of a renewable energy industry that just can't seem to take root in Arkansas. 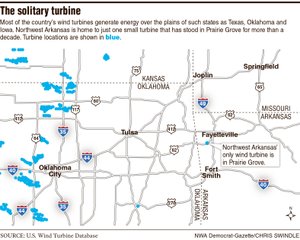 It's one of the only turbines in the state, more than 100 miles from the closest wind farm in Oklahoma, according to the U.S. Wind Turbine Database. Rudy Timmerman built it in the early 2000s and said he could get a couple hundred dollars' worth of electricity out of it in a month, until lightning or something else blew out its electronics around 2010.

The U.S. Wind Turbine Database provides an online map of turbines throughout the country. It’s available at eerscmap.usgs.gov/uswtdb/

Solar seems a much more cost-effective and bountiful business in general than wind could be around the area, he said, echoing the conventional wisdom of recent years.

"It was kind of a novelty, kind of a toy," said Timmerman, president of RCAL Products, a circuit-board manufacturer whose office sits below the now immobile turbine. "It's just kind of become a landmark more than anything."

Developers have made at least three attempts in the past decade to build a wind farm in Arkansas. Kansas-based TradeWind Energy in 2008 looked to build turbines in Searcy and Benton counties, but withdrew because of environmental concerns or lack of buyer interest. Dragonfly Industries International tried for one outside Elm Springs in 2014, but failed after local opposition.

There's also the question of wind. The Department of Energy has found the best wind energy potential in the country is in the Great Plains from north Texas to North Dakota. Turbines number in the thousands across Oklahoma and Texas. Arkansas winds at about 100 feet, on the other hand, mostly fall near the bottom of the wind-speed range.

"I wouldn't advise anyone doing it," Frank Kelly, chairman of the Arkansas Renewable Energy Association, said in a 2015 interview. Solar's the better investment unless a company wanted to build turbines reaching the steadiest winds hundreds of feet above the ground, he said.

Timmerman isn't the only one to try to tap the state's wind energy, however. The turbine database, a joint project by the U.S. Geological Survey, U.S. Department of Energy and other groups, lists Prairie Grove's as the only one in the state, but there are a handful more. John Brown University built a small one on its campus that can power trail lights, for instance.

Rick Bormann, senior vice president for a John Deere dealership called Greenway Equipment in eastern Arkansas, said the company built two small ones six or seven years ago outside Newport and Burdette in the state's northeast. But he soon left the energy business entirely because it couldn't work without consistent wind and federal tax credits for buyers, he said.

Now neither turbine works, one because of lightning, the other because of needed repairs that would require parts from overseas. Timmerman said he also hasn't found people with the expertise to fix his.

"There's nobody here to do that. It's hard enough to find somebody to work on a solar system," Timmerman said.

Timmerman has also left the energy business, selling his company Arkansas Wind and Solar to Jason Daniels in Elkins a few years ago. Daniels, who also installs heating and air conditioning systems, said the energy business consists mostly of installing solar panels for homes and commercial buildings. He has put in a few small, wind-energy generators, generally for charging batteries that kick in during an outage.

Daniels has hopes to build a solar farm on 40 acres near Fayetteville. Ozarks Electric Cooperative built a similar farm on 5 acres near Springdale a couple of years ago that has a 1-megawatt capacity, about enough for 200 homes or so.

Timmerman still hopes to fix the wind turbine someday. In the meantime, it's useful to give directions by, and Timmerman said researchers looking at the impact of working turbines on bats and other animals have used it as a baseline for comparison, since its blades aren't moving.

Larry Oelrich, who oversees administrative services and public works for Prairie Grove, said the city has no issues with it. A city maintenance facility sits next door.

"I used to love watching it when it was running," Oelrich added.