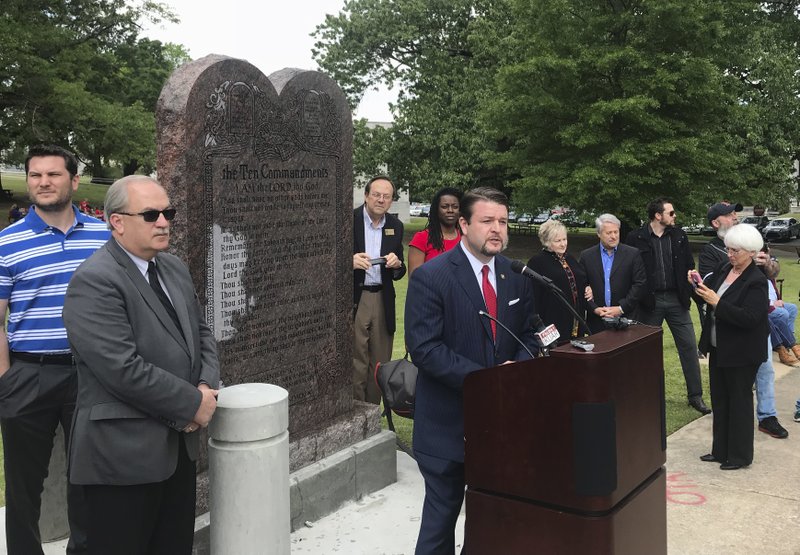 Arkansas Republican state Sen. Jason Rapert speaks at the unveiling of a Ten Commandments monument outside the Arkansas state Capitol in Little Rock on Thursday, April 26, 2018. The display replaces a monument that was destroyed nearly a year ago. Rapert sponsored the legislation requiring the privately funded monument on state Capitol grounds. (AP Photo/Andrew DeMillo)

LITTLE ROCK — Opponents of a Ten Commandments display at the Arkansas state Capitol filed federal lawsuits Wednesday to have the monument removed, arguing it's an unconstitutional endorsement of religion by government

Separate complaints were filed challenging the display, which was installed on the Capitol grounds last month. A 2015 law required the state to allow the privately funded monument. The monument was reinstalled last month after the original version was destroyed by a man who crashed his car into it.

The American Civil Liberties Union of Arkansas sued on behalf of four Arkansas residents — three who identify themselves as agnostics and one as atheist — who are members of a walking and cycling club whose routes include the state Capitol grounds. The group asked that the monument and the law requiring its installation be ruled unconstitutional.

"Viewing the context surrounding both the Act and the resulting Ten Commandments Monument makes it likely that they will be perceived by adherents of the majority religious denominations as an endorsement of their beliefs, and by nonadherents as a disapproval of their individual religious choices," the group said in its lawsuit.

The second lawsuit was filed on behalf of a coalition that includes the Freedom from Religion Foundation and the Arkansas Humanist Association, as well as a Methodist minister and a rabbi who objected to the monument's display.

A spokesman for Secretary of State Mark Martin, who is named as the defendant in both groups' lawsuits, declined to comment on the lawsuit. The lawmaker who led the push to put the Ten Commandments at the Capitol said he's confident the display will be upheld.

Last June, the original monument was outside of the state Capitol less than 24 hours before it was demolished. Michael Tate Reed, the man accused of driving his car into it, apologized in 2015 for also destroying a Ten Commandments monument outside Oklahoma's Capitol. Reed was charged with criminal mischief in Arkansas, but a judge in November found him mentally unfit for trial and ordered Reed to be held by the state hospital for further evaluation.

Arkansas' monument is a replica of a display at the Texas Capitol that was upheld by the U.S. Supreme Court in 2005. The court that year struck down Ten Commandments displays in two Kentucky courthouses.