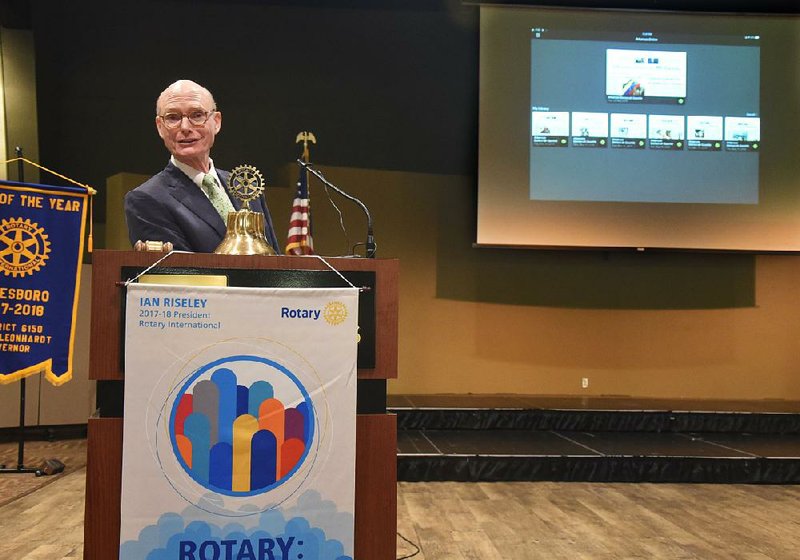 JONESBORO -- Standing before a luncheon crowd at the Rotary Club of Jonesboro, Walter E. Hussman Jr. explained Tuesday why the state's largest newspaper would be sending iPads instead of newspapers to the northeast Arkansas city.

The chairman of WEHCO Media Inc, the parent company of the Arkansas Democrat-Gazette, said that it was "not profitable at all" to continue to send distribution trucks 130 miles from Little Rock to deliver newspapers to the nearly 400 subscribers in Jonesboro.

Hussman said the Democrat-Gazette faced the same economic crisis all newspapers have faced from 2006 to 2016 -- when newspaper advertising revenue in the U.S. tumbled from $35 billion to $12 billion -- and that rather than sacrifice the Democrat-Gazette's statewide reach, the company would adjust with cost-saving technology.

Instead of sending newspapers to Jonesboro, Hussman said, the Democrat-Gazette will provide subscribers a free 12.9-inch iPad Pro -- market value $800 -- which can display the newspaper's layout in digital form. Circulation employees would be sent to households to assist with a tutorial, installation of the Democrat-Gazette's electronic application and connection to broadband or Wi-Fi.

The monthly subscription price does not change.

In February, the Democrat-Gazette experimented with the iPad distribution system with its subscribers in Blytheville.

"We've had pretty good success with this so far," Hussman said, "and we think this is really the best hope for our Democrat-Gazette to remain not only a statewide paper, but a complete, comprehensive, excellent newspaper as opposed to shrinking our paper and becoming shallow."

Hussman said investment in online ad revenue was not a feasible option -- nationwide digital ad revenue from newspapers increased from $2.6 billion to only $3.5 billion from 2006 to 2016.

He said the iPad idea also arose from an unwillingness to follow the cost-slashing approaches of other newspapers in the nation.

Hussman compared the Democrat-Gazette to the Raleigh News & Observer, which doesn't include a state news, business or style section, and he said WEHCO did not want to lower its robust coverage or raise its subscription price to the Raleigh newspaper's $50 per month.

"We can either become a Raleigh, or we can find some other way to try and maintain a complete and comprehensive newspaper," Hussman said.