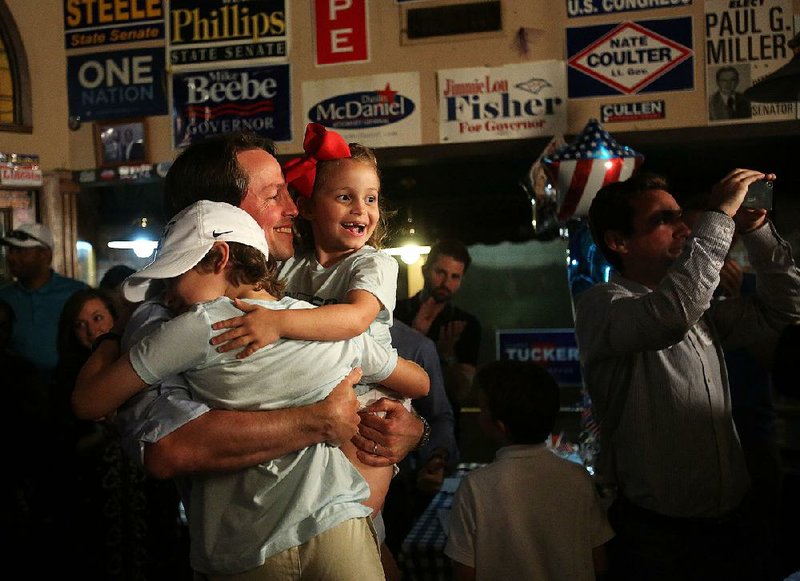 Clarke Tucker celebrates with his children Ellis (left) and Mari Frances after making his victory speech Tuesday night at Cotham’s in the City in Little Rock. ( Arkansas Democrat-Gazette / Thomas Metthe)

State Rep. Clarke Tucker on Tuesday won the Democratic nomination for the 2nd Congressional District, avoiding a runoff in the crowded race.

With 509 of 509 precincts reporting, unofficial returns were:

Tucker will face two-term incumbent U.S. Rep. French Hill in November's general election. The Little Rock Republican has represented the district since 2015, and it's been held by the GOP since 2011.

National Democratic Party officials, however, have identified the central Arkansas district as one that voters could flip later this year.

Tucker on Tuesday complimented each of his opponents for running a "noble" race, and he said he plans to focus on the same platforms during the November general election.

"From the day we got in the race we were focused on the people who live here in central Arkansas," Tucker said in a phone interview late Tuesday. "We feel that's what powered us tonight and what's going to power us on to November."

The district is made up of Pulaski, Conway, Van Buren, White, Perry, Faulkner and Saline counties.

In addition to Hill, Libertarian Joe Swafford of Maumelle is running for the office. U.S. representatives serve two-year terms, each receiving an annual salary of $174,000.

Dunkley, Combs and Spencer each espoused support for a single-payer, government-run health care system, and they've attacked Tucker for saying such a solution isn't feasible now.

Tucker, a two-term state representative, instead has thrown his support behind a proposal that would allow Americans to opt-in to Medicare but let others keep private or employer-sponsored health insurance plans if they so choose.

Pundits, party officials and even the candidates themselves admitted that Tucker was the favorite to win the race, and any chance to beat him would likely have been through a June 19 runoff.

National Democrats and media members have kept an eye on the race, wondering if it could foreshadow the direction of the Democratic Party.

Hill said in an emailed statement that he will run on his record in November.

"I look forward to contrasting my record of lower taxes and a stronger economy against my Democrat opponent's record of support for higher taxes and bigger government," Hill said.

"Clarke Tucker is a Hillary Clinton-supporting Democrat for higher taxes and bigger government, and for all the same reasons Nancy Pelosi's liberal allies support Clarke Tucker, Arkansans should oppose him," said Republican Party of Arkansas chairman Doyle Webb in a statement.

Hill has also sought to align Tucker with Pelosi, but Tucker has said he wouldn't support Pelosi for House leadership if elected.

"Those are stale Washington tactics I don't think people here will respond to."

Tucker, 37, decided to run after being diagnosed with bladder cancer in August. Now cancer-free, Tucker said the experience drove home the importance of health care, and he criticized votes by Arkansas' congressmen last year to repeal the 2010 Patient Protection and Affordable Care Act.

Tucker, a Harvard graduate, worked as a private attorney in addition to his time in the General Assembly. The Little Rock native consistently pointed to his work in the Republican supermajority Arkansas Legislature as proof he would be effective in Washington, D.C.

Dunkley filed for the office after his 9-year-old daughter told him in an early morning conversation before school earlier this year that he wasn't doing enough to make the world a better place, he said.

The Philander Smith College graduate, in addition to his support for Medicare for all, has decried the mounting pile of student-loan debt in the U.S., and he's suggested that the federal government could legalize marijuana for recreational use and tax it to help offset the steep costs of some progressive policies such as forgiving some student-loan debt and a single-payer health care system.

Dunkley, 38, a Louisiana native, is the son of a Jamaican immigrant, and he sought to become Arkansas' first black congressman.

Dunkley is the director of operations at the University of Arkansas Clinton School of Public Service. He runs a youth mentoring program.

Combs, 43, entered the political arena shortly after the 2016 presidential election. She was the lead organizer of the Arkansas Women's March.

Like Tucker, a congressional vote on health care pushed her over the edge. She filed as a candidate with the Federal Election Commission in the wee hours of July 28 after watching a Senate health care vote on C-SPAN.

She teaches gifted students at Stephens Elementary in Little Rock.

A self-described fighter, Combs pledged to fight for universal health care, and she wants Congress to pass an equal-rights amendment that would grant gay and transgender people the same protections as racial and religious minorities.

To fund her policy proposals, Combs said there's room to trim the nation's defense budget, particularly by decreasing troop presence in the Middle East and spending on nuclear armament.

Combs, an Ohio native, graduated from the University of Maryland University College.

Spencer, also an Ohio native, has long been involved in campaign finance and government ethics reform efforts. He teaches at Catholic High School for Boys in Little Rock, and he decided last year it was time to practice what he preached to his students and run for office.

Spencer talks a lot about money in politics. He has refused to take any money from political action committees. He's been critical of both political parties, calling them the "ultimate special interests."

Spencer laid out a variety of progressive proposals from Medicare for all to postal banking and student-debt elimination. Spencer holds anti-abortion views.

He described his position on abortion as "nuanced." He said he doesn't see a reasonable path to change current abortion laws and suspects any such measure would disproportionately burden the poor and ultimately increase the number of abortions. Instead, he said he wanted to address some of the root causes of abortion, such as domestic assault and poverty.

Tucker spent more on the race than the other three candidates combined, and his two television spots were the only ones in the race. Tucker reported $602,378 in contributions, according to his most recent campaign-finance report, and he spent $362,725. He has $239,653 on hand.

Hill has a campaign war chest of more than $1.6 million.