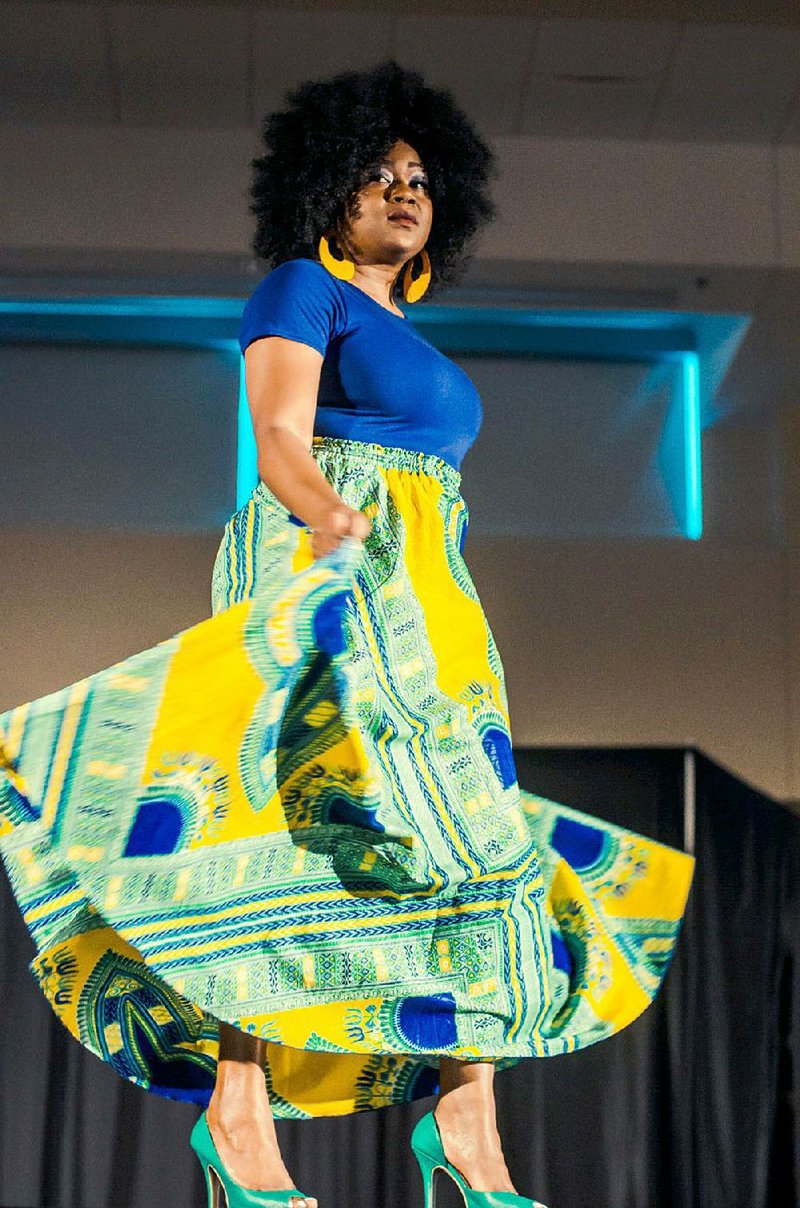 Tickets are on sale for Kurvy Kuties’ ninth annual Little Rock Full Figure Fashion Week, to be held June 22-24. A model shows off a colorful ankara skirt and coordinating top during a previous fashion-week showcase.

It's an understatement that plus-size clothing options have come a long way from the stereotypical muumuu.

Just about anything available in what's known in the industry as "straight sizes" can now be found in what was once known as "queen sizes" -- flirty, body conscious dresses and pants; two-piece outfits and swimsuits; fashion-forward outfit details such as open or sheer cutouts. Along with the improved selection has been some improvement in attitudes toward plus sizes, marked several years ago by the appearance of plus-size model Ashley Graham on the Sports Illustrated cover.

And one group of women has been working for nearly a decade to show that beauty is more than a set size ... and that wearing a size in double digits doesn't mean having to look dowdy.

Now Kurvy Kuties Inc., an organization of plus-size models, is gearing up for its ninth annual Little Rock Full Figure Fashion Week, to be held in late June.

The week culminates with the ninth annual Full Figure Fashion Week Show on June 24 at the Statehouse Convention Center, 101 E. Markham St. Doors open at 5 p.m.; the show starts at 6, with Keisha Ri'Chard-Patterson as master of ceremonies and fashions from It's Fashion Metro, Ashley Stewart, David's Bridal and IGIGI. Regular tickets are 20; VIP tickets, $40, at Eventbrite.com. Tickets for children up to age 12 will be $10 at the door.

Kurvy Kuties was founded by Kimbie Akins, according to event spokesman Brittney Harris. The mission began in 2006 "to bring forth the beauty that mainstream was not displaying in our ... curvier women, [who] of course, dominate here in the South." Akins drew from knowledge she'd gleaned from her association with the fashion industry in Georgia to uplift and celebrate the plus-size woman. What began as a Ms. Full Figured and Stylish competition eventually became Full Figure Fashion Week.

Harris acknowledges that it was "extremely difficult" to get Kurvy Kuties off the ground and garner support for it in its early days. "In Little Rock, whenever there was a model call or fashion show, the requirements usually [were] the standard fashion industry textbook definition -- which meant no plus sizes were included," Harris notes in an email.

But the group gained its footing, putting on shows that featured central Arkansas boutiques and designers such as J. Mitchell's, S. Urban, L'Dior, Paul Morrell, Angela McKenzie-Smith and Sweet Charlotte Designs; and a number of out-of-state clothiers.

The troupe has enjoyed the talents of close to 50 models over the years. During an annual open model call, eight to 10 women are selected to become Kurvy Kuties, or to simply try their hand at modeling. Some Kurvy Kuties have been featured during New York Fashion Week, in other shows in other states, and in various publications. Sizes ranging from 10 to 28 have been represented. "We are known as a ... plus-size modeling troupe, but we pride ourselves on being inclusive," Harris says. "We want to let everyone see that the word 'plus' is not a description of every woman who does not fit a size 8."

That inclusiveness has extended to the opposite sex. In 2017 the troupe premiered a show segment called Men of "Brawn," featuring a few select male models. "The reaction was amazing," Harris recalls. The segment will return to this year's show.

"[The women and men] who will walk that runway may have, at one point, had self-doubt of where they belong, been bullied or even had low self-esteem, but this is an outlet for them to shine," Harris says.

Submitted for your approval: Reviews of a few fashionable things.

• For those who like being fashionably shod for a cause: Uwezo Shoes, whose name means "capacity" or "ability" in Swahili. A percentage of profits from each pair of shoes sold generates scholarship funds for Empower African Children, a nonprofit organization established by Uwezo founder Alexis Hefley. These shoes feature natural, repurposed hair-on cowhide; mottled patterns unique to each hide; and custom shoelaces. Men's styles consist of an oxford, a slip-on and a "desert boot," all $185. Women's styles consist of a "mule loafer," $150, and an oxford, also $185. I tried a black-and-white sample of the all-season Mule Loafer, which also comes in brown and white. The shoe has a leather upper featuring the cow-hide topside and top stitching detail, and needs just a bit of breaking-in to accommodate a moderately wide foot. Visit Uwezobrands.com.

• For those who need a little orthotic-shoe aid: Vionic Shoes' Maris Wedge ($119.95), a sample of which I tried in Light Tan (one of four colors it comes in). The espadrille-style shoe has a leather or suede-with-canvas upper, grosgrain laces at the ankle and a 21/2-inch rope heel and is designed to hug the arches. The Maris comes in sizes 5-11 and in medium and wide widths. It could be the most comfortable shoe I've worn. For a generous list of Vionic's Arkansas retailers, see Vionicshoes.com.

• For those who want their umbrellas to match their outfits -- and, actually keep them dry: ShedRain's UnbelievaBrella Reverse Umbrella ($20), one of several reverse-open-and-close umbrella brands, has gone fashionable with three under-canopy prints. The girly prints are Prom Dress Polka Dots -- black upside, white-on-black polka-dot under-canopy; Bond Navy & White Stripe -- solid blue upside, navy-and-white striped under-canopy; and Clouds -- black upside with sky-blue-with-white-clouds under-canopy. I tried a sample of the Bond Navy & White Stripe. Being a first-time user of a reverse-open-and-close umbrella -- which keeps the water away from the user by funneling it into the umbrella when it's closed -- I was even more enamored of the way it works. The Unbelievabrella is available at Dillard's and Shedrain.com. 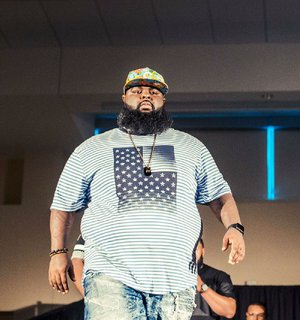 Photo by Special to the Democrat-Gazette/EBONY BLEVINS
Little Rock Full Figured Fashion Week introduced a few male models, in a fashion-show show segment called Men of “Brawn,” in 2017. The men will return for the ninth annual fashion week, to be held June 22-24. 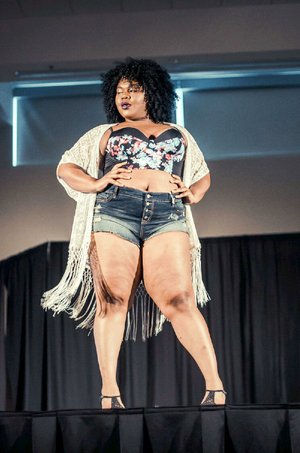 Photo by Special to the Democrat-Gazette/EBONY BLEVINS
The body positivity movement has meant more acceptance of plus sizes as well as more plussize fashion options. In Little Rock, the movement has been helped along by Kurvy Kuties Inc. via the troupe’s annual Little Rock Full Figure Fashion Week.

Photo by Special to the Democrat-Gazette/UWEZO
Uwezo Shoes isn’t just another brand of pretty/handsome foot gear. A percentage of the profits from the shoes helps pay for scholarships for the nonprofit organization Empower African Children. 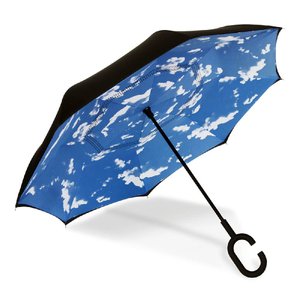 Photo by Special to the Democrat-Gazette/SHEDRAIN
ShedRain’s Unbelievabrella Reverse Umbrella, one of several reverse-open-and-close umbrella brands, has gone fashionable with three under-canopy prints including Clouds, featuring a cloud-dotted sky on its under-canopy and a black upside. 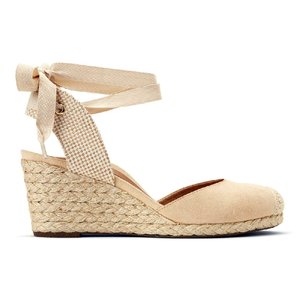 Photo by Special to the Democrat-Gazette/ VIONIC SHOES
Designed to hug the arches, Vionic Shoes’ Maris wedge delivers a generous amount of comfort along with style.