When Cornelius Mabin first told his parents he was gay, they took him to the doctor. The doctor told his parents their son needed surgery to remove whatever it was that made him attracted to men.

Mabin, a teenager at the time, stormed out of the clinic.

"I told them 'That doctor is a quack, and there's nothing medically wrong with me,'" he said.

That was in the early 1980s, just as doctors were taking notice of the AIDS epidemic in the United States. Since then, testing and treatment for AIDS and HIV have improved, and medical professionals don't think surgery can change sexuality. Still, stigma and a lack of education keep Arkansans, especially those in rural areas, from getting screened for the human immunodeficiency virus, experts say.

Disease detectives for the U.S. Centers for Disease Control and Prevention met last month to discuss new findings. One in rural West Virginia showed that, despite the explosion of opioid use in the nation and the use of needles in drug abuse, HIV is more commonly spread among men through sexual contact.

Dr. Mary Evans, a researcher for the CDC who specializes in HIV/AIDS, began work in West Virginia when the state health department asked for help. The department had detected an increase in HIV diagnoses in three counties. Evans' research expanded on that to include 12 nearby counties.

"The men we interviewed said they were not comfortable asking for an HIV test from local health departments or medical providers because they feared revealing their sexual orientation and facing stigma in the community for it," Evans said via email.

"These fears typically prevented men from reaching out to be tested, but they did not face discrimination in receiving HIV care."

HIV takes over the body's immune system and forces it to reproduce copies of the virus. It can progress to become AIDS, an acquired immunodeficiency syndrome, and there is no known cure, according to the CDC.

Arkansas health care providers also say men in Arkansas who have sex with men postpone HIV testing because they don't want people to know they're gay.

"In the southern states, people who are diagnosed with HIV often go to AIDS within a year," said Dr. Naveen Patil, the medical director for the Arkansas Department of Health's infectious diseases branch.

Patil said that in Arkansas, HIV transmission falls in line with the West Virginia study; it is mostly passed by men who have sex with men.

"HIV is still perceived in most of the conservative churches in Arkansas as a punishment and that the person has made choices and decisions that's put them in that situation," said Danny Harris, an outreach coordinator for ARCare. "And there's a fear and a lack of knowledge of how it's transmitted."

ARCare, a network of health clinics providing a variety of health care services and other support, has sites across the state that offer medical care and case management to people living with HIV.

Confusion about what causes HIV and the unwillingness to get tested is exacerbated by a lack of education in Arkansas' public schools, Harris said.

Arkansas has no law requiring sexual health to be discussed in schools, and the Arkansas Department of Education standards recommend emphasizing abstinence.

Only 25 of Arkansas' 262 school districts reported teaching anything about sexual orientation, according to a 2017 survey of all districts by the Arkansas Democrat-Gazette.

"When you look at Milwaukee, that had 120 cases of syphilis and HIV in a high school, you realize that the opportunity is ripe here for similar type of outbreaks here in Arkansas," Harris said. "We don't talk about it, we don't educate."

Mabin said he didn't learn about sex in school. He asked his parents, and they told him if he had questions about "that," he should go visit the pharmacist.

So he went to the pharmacy and waited, a nervous adolescent milling around the aisles, hovering close to the counter in case the pharmacist decided to deliver some sort of edict.

"He never said anything," Mabin said. "So I began to research things in the encyclopedia and go to the library."

Things have changed since the 1980s. Some schools offer more comprehensive sex education that teaches students about diseases, condoms and birth control. But most of Arkansas' school districts -- about 85 percent -- encourage abstinence, and 37 districts don't teach sex education at all.

Of the 25 that reported that they do mention sexual orientation, a few provided brief explanations in response to the newspaper's survey.

Arkadelphia School District reported that its program taught about reproduction in the fifth grade and that "topics such as contraceptives, abortions, and morals are not presented."

A handful of districts -- like Danville and Magazine -- reported discussion about inclusion and equality, while Newport said its teachers taught the "roles and responsibilities of each orientation."

Becca Mui, the education manager with GLSEN, a group that advocates for LGBTQ (lesbian, gay, bisexual, transgender and queer) youths in schools, said it's typical in the United States for schools to skip a conversation about issues of sexual orientation.

She added that it can be confusing for kids who end up essentially teaching themselves about sex.

"What happens is when young people aren't seeing themselves in their curriculum, they're going online to find it out for themselves," Mui said. "There's no way to find out if that information is useful or appropriate or medically accurate."

A part of her job is to support educators who want more information, and there has been an increased interest in the subject in the past year, she said.

But most LGBTQ students still report in surveys that they don't see their issues reflected in health class.

"The hope is that having accurate health information helps all young people to make healthier choices," Mui said.

Harris said he is sometimes asked to speak in Arkansas schools and tries to use that as an opportunity to also talk to adults about using protection and getting HIV screenings early and often.

Often, however, he will arrive at a school only to be told that he can't talk about condoms, just monogamy and abstinence, he said.

His focus when talking to adults at other community venues such as churches is also on PrEP, a preventative medication for HIV, he said. The Department of Health divvies up federal grant money to 46 medical providers across the state. ARCare is one of the recipients of grant dollars.

"Most of the insurance companies do not cover PrEP because it's a high-cost issue," Patil said.

There are about 1,900 Arkansans receiving treatment for HIV through the Ryan White grant, a federal program that provides medical care and support services for individuals living with HIV/AIDS, said Rene Montgomery, the department of health's infectious disease branch chief.

The department encourages people who are high-risk to start PrEP. It also does testing in communities, encourages treatment, speaks at college campuses and works with LGBTQ support groups and clubs, she said.

Mabin said he and other volunteers work to encourage testing by organizing health fairs in rural communities, but there is still a lot of ground to cover.

"It's not over," Mabin said. "We've still got work to do as far as reducing new infections." 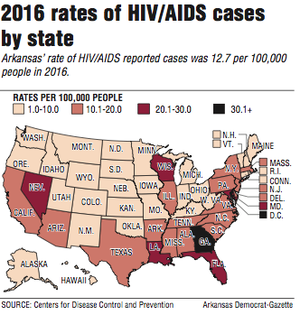 2016 rates of HIV/AIDS cases by state 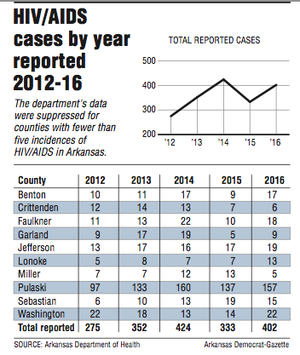