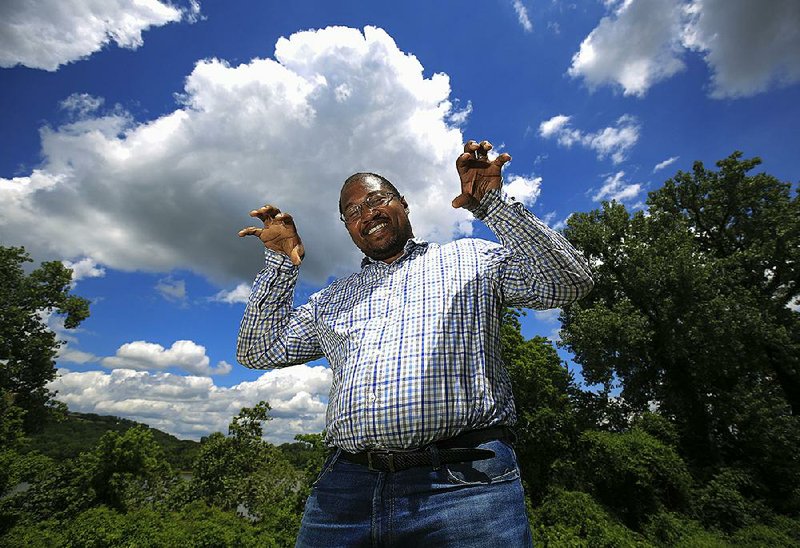 Josh Hill, a network engineer for Verizon Wireless, demonstrates one of the gestures he used during his seven-day winning streak on Jeopardy.

The first time Josh Hill tried to get on Jeopardy was in 1998.

When he made it on the show 20 years later, it seemed like he'd never leave.

The North Little Rock resident and network engineer stayed behind the buzzer for a seven-day streak that won him $163,721, along with a spot on the show's next Tournament of Champions. His celebratory tiger-claw gesture after each correct "What is ..." garnered attention from fans.

Until his final episode aired Friday, the fact that Hill, 35, had achieved a bit more than his lifelong dream of just getting on the show was a tough secret to keep.

"It was a mind-blowing experience," he said. "It was pretty tough downplaying everything."

Hill's journey to Jeopardy started when he was growing up surrounded by shows that made fun of the smart kid -- like Steve Urkel on Family Matters. But on game shows, "it was cool to be smart," he said. That stuck, taking him to Quiz Bowl tournaments in high school and college.

At 15, he tried out for the Jeopardy Teen Tournament. But during a mock game at the New Orleans audition, he made a mistake in front of the cameras -- rolling his eyes when he wasn't called on to give an answer.

"They want to make sure that you had a good presence, would be fast with the game played, select the next clue quickly, remain cheerful and jovial even when you might not be first in on the buzzer," Hill said of the crew.

His auditions for other game shows, including a bid for Who Wants to Be a Millionaire in Memphis, were also unsuccessful. Hill said he gave up the hobby for a few years, until an online trivia league helped him get his mojo back, resulting in an audition in Houston.

He prepared by watching old episodes of the show -- many answers get repeated over time, with the writers finding new ways to frame the same information, he said.

The day after he returned to Little Rock from his audition, Hill got a call from a producer on the show, asking him to fly to California for a taping.

"At that point I started spazzing out," Hill recalled, laughing. "I was doing everything in my power not to jump up and down in the middle of Tropical Smoothie."

The show tapes five episodes a day, he said. After winning the first two, Hill was on a roll. Even Alex Trebek was mimicking Hill's signature tiger claws -- a tribute to the mascot of Hill's alma mater, Brinkley High School. His new goal was to win five games.

In the eighth game, he started falling behind. About halfway through, he knew that his opponents' knowledge of one of his weak areas -- entertainment, especially movies -- was just too strong.

"I was almost at peace with it," he said. "I did the best I could, and I'm grateful for the opportunity."

Since he and his wife have already toured the whole continental United States, Hill said they'll use some of his prize money for trips to Alaska and Hawaii. He said he'd also like to make some home improvements -- maybe fix up his basement for the next Jeopardy watch party.