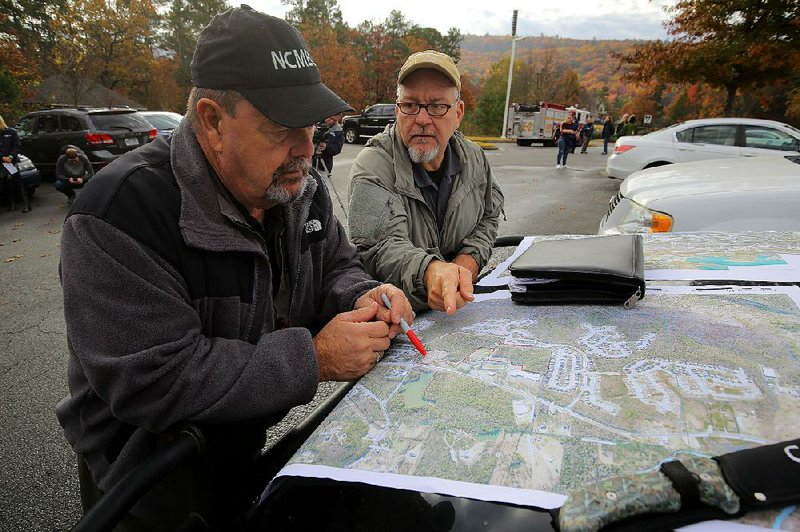 FILE PHOTO: Henry Schmidt (left) and Jack VanHooser Jr., retired law enforcement officials working with the National Center for Missing and Exploited Children, look at a map of the area around Chalamont Park before beginning a search for a missing girl in November 2016 in Little Rock. Ebby Steppach was 18 when she disappeared in October 2015. Her car was found at Chalamont Park soon after she was reported missing.

Days after Ebby Steppach disappeared in October 2015, her friend's mother told police she smelled something decomposing in a storm drain near the spot where the teen's car was found.

Margie Foley called 911 from Chalamont Park, where Steppach's Volkswagen Passat was found, and spoke with a Pulaski County dispatcher, according to dispatch audio recordings dated Nov. 3, 2015. That was four days after police found the car and nine days after Steppach's family last saw her.

"I brought my daughter here who was a friend of [Steppach's]," Foley said in the recording. "And we just started walking around, and I could smell decomposition."

Steppach's body was found May 22 of this year in a drainage culvert in Chalamont Park. Investigators sent robots with cameras into the pipe and found an obstruction. When they dug up the drains, they found human remains.

Authorities searched the park in late 2016, and Foley said she told them about the smell again then.

Steppach's family last heard from Steppach on Oct. 25, 2015. She was 18 and a Little Rock Central High School senior.

Foley said she waited about an hour at the park before any law enforcement official arrived. Officers shined flashlights into the drainage pipe. When they returned to her car, they told her she was smelling sewage.

"They brushed me off," Foley said in an interview.

Little Rock police declined to comment for this article, citing an ongoing investigation. They have declared Steppach's death a homicide.

Police also declined a request, filed under the state Freedom of Information Act, for their recordings of 911 calls regarding Steppach, again citing the investigation.

Steppach stayed with Foley and her daughter Kailey for a few weeks in 2015 because Steppach had moved out of her parents' house. She met Foley's daughter when they both worked at Playtime Pizza.

"It just makes me physically ill thinking that the girl that I had in my home, had taken in, was decaying down there and that's what I smelled," Foley said. "And nobody did anything. They just left her there."

Foley said she called police at least three times before connecting with anyone there, and later left phone messages for the investigator who was originally in charge of Steppach's case.

In 2017, the Little Rock cold-case department, a team of four retired officers who work part time, took over the missing teen's case.

"They kept dismissing me," Foley said. "It never sat right with me."

In an earlier interview, Steppach's mother, Laurie Jernigan, cited several examples of what she says were investigative missteps from the beginning of her daughter's case.

They included police telling her family members that they had to wait 12 hours before reporting Steppach missing, even though there is no legal requirement to do that.

For eight months, Steppach's disappearance was treated as a runaway incident rather than a missing-person case, her parents said in earlier interviews.

A security guard at the park reported an abandoned car in the parking lot Oct. 28, but police waited two days to go investigate, Steppach's parents said.

While the car was in police custody, the trunk was left open and a rainstorm swept through, leaving water damage in the car and to many of Steppach's belongings, her parents said.

Jernigan said the new detail of Foley's 911 call is devastating but that she's tired of fighting. She said she needs time to recover from 2½ years of looking for her daughter.

"I thought for a long time she was deceased," Jernigan said. "I was totally shocked and still am shocked that she was there. Just 50 feet from her car. It's heartbreaking. I'm pretty angry about that."

She said she has questions for detectives who first looked into the case, but she isn't sure they will ever be answered.

One of them is: "Why didn't you want to find my daughter?"

Information for this article was contributed by Ryan Tarinelli of the Arkansas Democrat-Gazette. 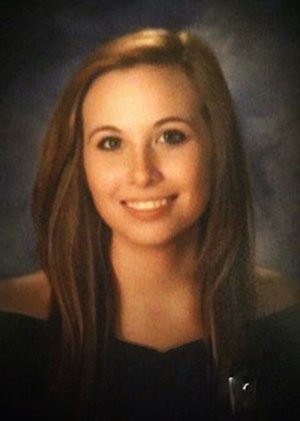