The chairman of the Democratic Party of Arkansas faces a Republican challenger in his re-election bid for a state House seat, and he touts his singular focus on constituents over political party as the reason voters should choose him in Tuesday's election.

Gray, a farmer with a law degree, has served the district -- which includes portions of Jackson, Woodruff, White and Independence counties -- since 2015.

"It's not about politics," Gray said. "I didn't run because a political party encouraged me to. I don't serve an ideology. When constituents call me with issues, I don't ask which party they belong to."

Christiansen, who has owned a model-train shop in the Bald Knob depot for the past 25 years, has never held an elected seat, but served in various state capacities under five state governors -- including stints on the Legislative Task Force on Intermodal Transportation and Commerce and the state Fire Prevention Commission.

It's through his service, Christiansen said, that he recognized some vital needs of the state -- such as in education, infrastructure and health care -- and he realized the best way to be part of the solution was to run for office.

"I believe we need a representative that is going to stand for something factual; a representative that will move things forward," Christiansen said. "I have the experience and the knowledge. I understand the way it works. I want to be a contributing factor rather than a detractor as far as moving Arkansas forward."

In a recent Republican campaign mailer, Christiansen is touted as a strong supporter of the Second Amendment who stands strong against illegal immigration, while Gray is accused of voting against gun rights and refusing to take a stand on immigration.

When contacted, Gray said the claims are "all untrue." Gray said he has made repeated public stances on illegal immigration and has said immigration laws should be enforced.

"If the president wants to build a wall, let him build a wall, but let's make sure we put a door in it," Gray said. "It's a blatant lie that I haven't taken a stance. What is worse is that we don't take votes on immigration in the state Legislature. That worries me that the man [Christiansen] may not understand the job he's applying for."

Furthermore, Gray said, he is a hunter and a gun owner who has worked on both sides of the aisle for gun rights.

"As I've always said, I will be the first in line to stand up and fight for the Second Amendment rights for law-abiding gun owners," Gray said.

Gray added that he has never been in favor of raising any kind of estate taxes.

Christiansen took umbrage with Gray's negative campaign and said the claims are false. Laws against illegal immigration should be enforced, and he raised his children and grandchildren in the public school system, Christiansen said

"It is what it is in politics. I don't like that we got to a point in politics that we have to outright lie," Christiansen said. "You can say anything, but the proof is in the reality."

Tax records and court filings show that since 1998, the state has filed more than two dozen tax liens against Christiansen and a business he owned called Southern Star Feeds for unpaid sales taxes. The state took Christiansen's home in 2013 to satisfy unpaid tax debt. The house was eventually deeded back to Christiansen and his wife after the taxes were paid.

A federal tax lien was filed by the Internal Revenue Service in 2011 for nearly $20,000 in unpaid income taxes. White and Jefferson counties tax records show that Christiansen and his wife were late multiple times on payment of personal property taxes.

Christiansen said the financial troubles were due to an unforeseen medical issue and involved a person who couldn't qualify for health insurance because of a pre-existing condition.

"That trickled in over quite a while. It seemed like a never-ending cycle," Christiansen said. "But we've taken care of 90 percent of the issues we've ever had. We just kept rolling along."

Christiansen, who said he worked in transportation investigation for several years in California, moved to Arkansas in 1977. He has two grown children and a 16-year-old son.

Gray, a former member of the Augusta City Council before he was elected to the House. He and his wife have a 4-year-old son.

The candidates differ on some key issues, but also have some similar stances.

Christiansen supports Hutchinson's proposal to cut the state's top individual income tax rate. Arkansas has one of the highest tax rates in the nation, Christiansen said.

"We need to do things that benefit our people, lower the tax rate and give us a little relief," he said.

Gray said he's worked with Hutchinson in the past on tax cuts, but said it's necessary to take a responsible look at the impact of them.

"We need to make sure that if we're cutting taxes, we're not sacrificing better roads and better schools," Gray said.

Gray voted twice as a legislator for Arkansas Works, the state's Medicaid expansion program that provides health care coverage to low-income households. This summer, Arkansas became the first state to implement a work requirement for some of its Medicaid recipients.

"It has been vital to providing health insurance to Arkansans and in keeping rural hospitals around so citizens can have access to quality health care in this part of the state," Gray said. "The question now is, what can we do to protect our local pharmacies and to make sure that skyrocketing premiums for working Arkansans are brought back in line?"

Christiansen said the work requirement is a "hardy encouragement" for people to take a hand up instead of a hand out.

"I think that what we have here with Arkansas Works is an opportunity for a lot of people to move forward, to move upward and improve," Christiansen said.

Gray said abortion is a tough issue and he is generally opposed to abortion except when the life of the mother is at stake or in the cases of rape or incest.

"We will have fewer abortions if we prioritize funding for foster care and women's health and provide greater access to health care and education," Gray said.

Early voting for the general election is underway and continues through Monday. Election Day is Tuesday. 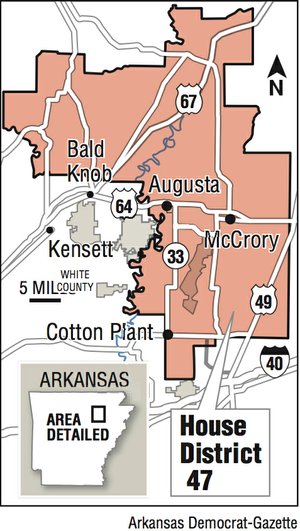 A map showing the location of House District 47.