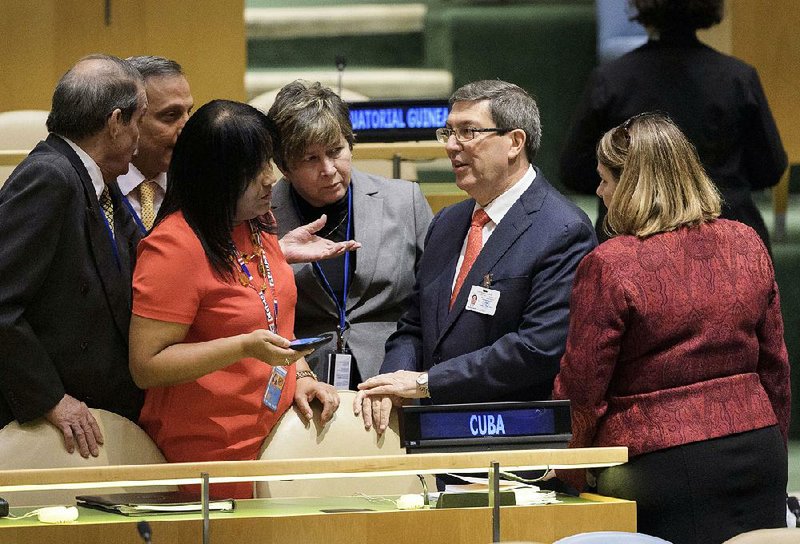 Resolutions adopted by the 193-member world body are unenforceable, but they reflect world opinion and the vote has given Cuba an annual stage for the past 27 years to demonstrate the isolation of the United States on the embargo.

It was imposed in 1960 after the revolution led by Fidel Castro and the nationalization of properties belonging to U.S. citizens and corporations. Two years later the embargo was strengthened.

The General Assembly's vote on the Cuban-sponsored resolution on the "Necessity of ending the economic, commercial and financial embargo imposed by the United States of America against Cuba" was 189-2. The U.S. and Israel voted "no" and Moldova and Ukraine did not vote.

In earlier separate votes on the proposed U.S. amendments, Ukraine and Israel were the only countries to join the U.S. in voting "yes" on all eight measures while the Marshall Islands backed one amendment. Some 114 countries voted against the amendments and about 65 abstained.

The proposed amendments expressed serious concern at the lack of freedom of expression and access to information in Cuba and the prohibition on workers' right to strike. They called on Cuba to fully grant its citizens "internationally recognized civil, political and economic rights and freedoms," to establish an independent civil society and to release people detained for exercising their human rights.

Cuban Foreign Minister Bruno Rodriguez called the U.S. embargo "a flagrant, massive and systematic violation of the human rights of Cuban men and women" and denounced what he called the politicized U.S. amendments.

"The government of the United States doesn't have the least moral authority to criticize Cuba or anyone when it comes to human rights," he said.

Rodriguez accused the U.S. government of committing "crimes against humanity," pointing to its dropping of the atom bomb in Japan in World War II, waging wars that "caused the death of millions, many of them innocent," and carrying out what he claimed were "extrajudicial executions, kidnapping and torture." He also accused the U.S. of violating the human rights of its citizens, singling out black Americans, Hispanics, minority groups, refugees and migrants.

U.S. Ambassador Nikki Haley stressed before the votes that "our reason for the embargo is and has always been Cuba's denial of freedom and the denial of the most basic human rights for the Cuban people."

She urged the General Assembly to use its "megaphone" and "send a moral message to the Cuban dictatorship" that could help improve the lives of the Cuban people.

But the United States failed to get support even from Western nations.

The European Union said the U.S. amendments did not belong in a resolution dealing with a trade embargo, and its members supported the resolution calling for the United States "to repeal or invalidate" the embargo. Canada also spoke out against the amendments.

After the U.S. defeat, Haley told the General Assembly: "There are no winners here today, there are only losers."

She said the U.N. "lost the opportunity to speak on behalf of human rights," but most of all the Cuban people have "been left, once again, to the brutal winds of the Castro dictatorship."

"They have been abandoned by the United Nations and most of the world's governments, but the Cuban people are not alone today," Haley said. "The American people will stand with them until they are restored the rights that God has given us all, rights that no government can legitimately deny its people."

The decision by the administration of President Donald Trump to call for individual votes on the amendments represents an escalation of its action last year and reflects worsening U.S.-Cuban relations.

Cuban President Raul Castro and then-President Barack Obama officially restored relations in July 2016. But Haley and others have sharply criticized Cuba's human-rights record. In 2017, the U.S. returned to voting against the resolution condemning the American economic embargo after the Obama administration abstained in 2016, a first for the United States in 25 years.

On Wednesday, diplomats voiced their support for the Cuban resolution.

Egyptian Ambassador Mohamed Edrees, speaking on behalf of the Group of 77 which represents 135 developing countries and China, pointed to "the positive steps ... focused in the right direction" taken by the Obama administration and expressed regret at the Trump administration's new policy "aimed at strengthening the embargo against Cuba."

Ambassador Sheila Carey of the Bahamas reiterated the Caribbean Community's "unequivocal opposition" to the embargo and said last year's near unanimous vote in favor of immediately lifting the embargo "is a clear indication of prevalent disapproval by the U.N. membership."

South African Ambassador Jerry Matjila expressed regret that the gradual relaxation of the embargo under Obama has been reversed "and the people of Cuba are once again faced with a monumental obstacle toward the fulfillment of their basic human rights, including the right to development."

Thursday's vote came shortly before Trump's national security adviser, John Bolton, announced in Florida that the administration is imposing new sanctions on Cuba and Venezuela and soon on Nicaragua, calling the three countries a "troika of tyranny."

Bolton condemned what he called the "destructive forces of oppression, socialism and totalitarianism" that he said the three countries represent.

Bolton's speech at Freedom Tower in Miami, the building where the federal government received many refugees fleeing Fidel Castro's Cuba, framed the sanctions as part of a broader effort by the U.S. to promote democracy in the Americas.

"This triangle of terror stretching from Havana to Caracas to Managua is the cause of immense human suffering, the impetus of enormous regional instability, and the genesis of a sordid cradle of communism in the Western Hemisphere," Bolton said. "Under President Trump, the United States is taking direct action against all three regimes to defend the rule of law, liberty, and basic human decency in our region."

He said the U.S. "will no longer appease dictators and despots near our shores in this hemisphere."

The new Venezuela sanctions target the country's gold sector, prohibiting U.S. citizens and entities from financial involvement in the trade.

The U.S. government has sanctioned dozens of top Venezuelan officials, including Maduro, as part of economic measures designed at pressuring the South American country's return to democracy.

Bolton said in response to questions after the speech that he doesn't expect the U.S. military to intervene in Venezuela. "I don't see that happening," he said.

Bolton blamed Cuba for enabling Maduro's government and he urged the nations of the region to "let the Cuban regime know that it will be held responsible for continued oppression in Venezuela."

He said Trump's State Department has added more than two dozen entities owned or controlled by the Cuban military and intelligence services to a restricted list of entities with which financial transactions by U.S. persons are prohibited.

Bolton said the goal is to prevent money from reaching the Cuban military, security and intelligence services.

Nicaragua is in the Trump administration's cross hairs because of a violent political crisis sparked earlier this year after President Daniel Ortega announced changes to the country's social security program.

More than 300 people have been killed since protests broke out in April calling for Ortega's resignation.

"Free, fair, and early elections must be held in Nicaragua, and democracy must be restored to the Nicaraguan people," Bolton said. "Until then, the Nicaraguan regime, like Venezuela and Cuba, will feel the full weight of America's robust sanctions regime."

Bolton mocked the leaders, comparing them to The Three Stooges. "These tyrants fancy themselves strongmen and revolutionaries, icons and luminaries," he said. "In reality, they are clownish, pitiful figures more akin to Larry, Curly, and Moe."

Information for this article was contributed by Edith M. Lederer, Luis Alonso Lugo and Gisela Salomon of The Associated Press and by Justin Sink and Jonathan Levin of Bloomberg News. 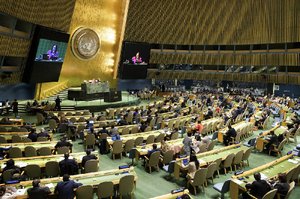 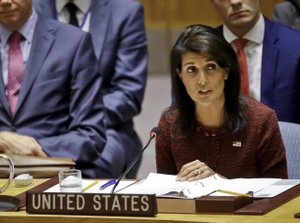