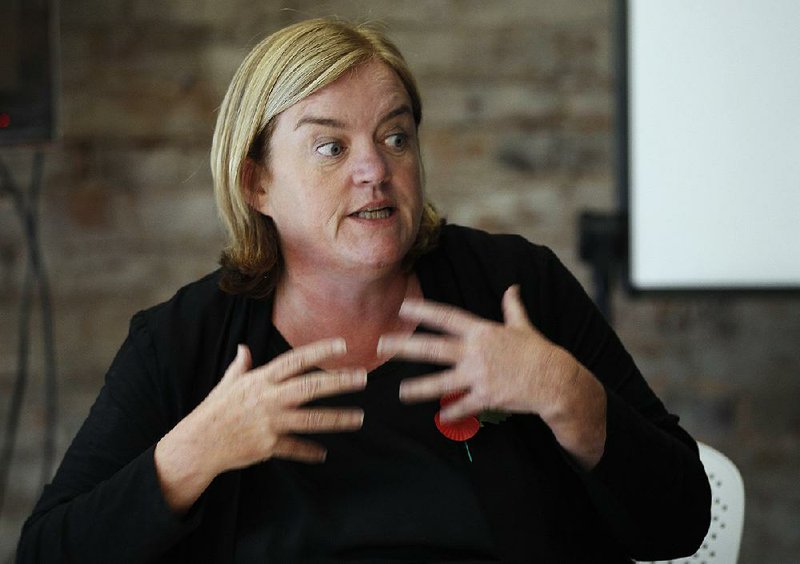 Dame Louise Casey with the Institute on Global Homelessness talks about her role with the organization during a visit Friday to Little Rock.

Little Rock officials announced Friday that they will try to reduce street homelessness by 25 percent in Ward 1 by 2020, the first step in a partnership with a group that is striving to end street homelessness in 150 cities across the world by 2030.

The institute is affiliated with and partially funded by Chicago's DePaul University and Depaul International. Depaul Charity is a branch of Depaul International and operates Jericho Way Center, a day resource center for the homeless in Little Rock.

The institute plans to announce four more city partnerships in the next six months.

"They're a resource," City Manager Bruce Moore said. "This is the work they do every day."

Moore and Ward 4 City Director Capi Peck went to Chicago to meet with institute leaders in the spring. Several service providers said they learned about the partnership Friday.

Peck said that at first she was wary about the lofty goal, but as she has learned more, her excitement has grown.

"Ultimately, we all have the same goal," she said. "It's a daunting task, but I think it's achievable."

Little Rock was selected in part because of its status as a "city of compassion," and it's representative of smaller cities, said Molly Seeley, an institute program director.

"You in Little Rock now carry a responsibility not only to Little Rock, but to your country and the rest of the world," Dame Louise Casey said of the partnership. Casey, a U.K. resident, is the advisory committee chairwoman for the institute.

At a morning meeting with service providers and city officials, institute representatives outlined plans to achieve the goal. The first step will be to count the homeless on the city streets.

The 2017 census of the homeless in the Little Rock metropolitan area showed that there were about 990 homeless people in Lonoke, Prairie, Pulaski and Saline counties. Just over half of those did not have regular shelter.

Seeley said the count will be similar to the point-in-time census of the homeless that is conducted every other year.

After that, a steering committee that has not yet been selected will examine what work is being done in Little Rock to help the homeless and why people become homeless in the city, and will try to divert people away from homelessness.

Seeley said there will be monthly check-in calls with the institute to see how Little Rock is progressing. If service providers or city officials have questions, they can connect with experts.

"We're not going to come in and say, 'This is what you do,'" Seeley added.

• Reduce street homelessness by 25 percent in Ward 1, which includes downtown and other areas of northeast Little Rock.

• Adopt the institute's definition of ending street homelessness, which is tailored to a global audience.

• Become a part of the institute's sliding scale of data and report progress.

• Send at least two representatives to an annual learning workshop.

Seeley said the institute will help connect Little Rock officials with homeless advocates from other cities and keep them accountable to meet their goal.

Earlier this year, Little Rock Mayor Mark Stodola announced that the city was at "functional zero" for homeless veterans, which means that service providers know who the homeless veterans are and can put them in shelter quickly.

In 2006, the city pledged to end chronic homelessness by 2016, but a report this year from the Central Arkansas Team Care for the Homeless showed 82 chronically homeless individuals staying in emergency shelters.

The difference between the Ward 1 goal and previous goals is the presence of a third party, Casey said.

"We just reflect back what people already know, but find quite difficult to say to each other," Casey said. "Let's just remind ourselves why we're all here."

She also said that in Adelaide, officials have a new understanding of why people become homeless, which she thinks will happen soon for Little Rock.

Chris Porter, the homelessness advocate who works for Little Rock, said he was hopeful about having an official starting point and smaller goals to meet along the way to ending street homelessness.

"All those people who are suffering here, if we can work in a certain area, I think that's a great idea," Porter said. "I think we should not neglect the other areas because we are spending that energy in one area."

But he added that the city would need more housing because there isn't enough space to put everyone who is homeless into homes right now.

Casey added that the eventual goal is to end homelessness overall. 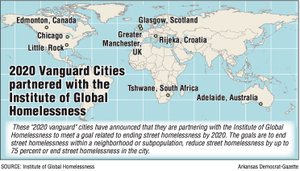