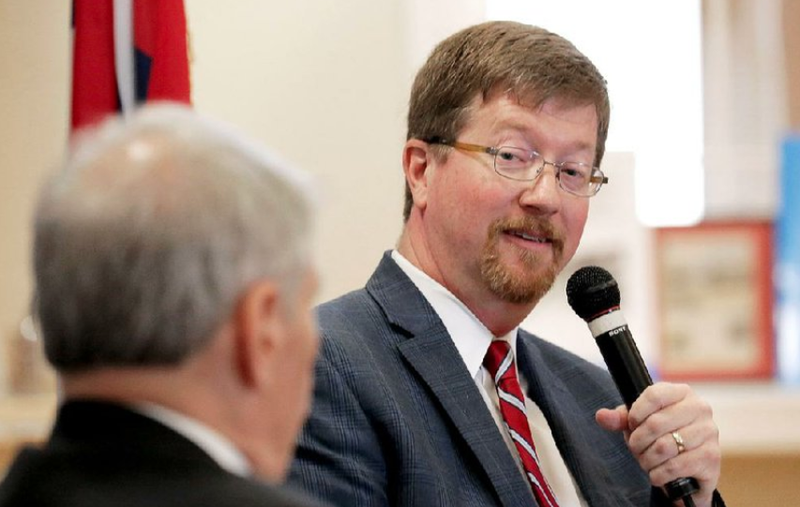 Arkansas Education Commissioner Johnny Key said Friday that the Little Rock Education Association is "spreading misinformation" and "sowing seeds of fear" in its opposition to his proposed waiver of employment protection laws in 22 schools that got D and F ratings.

In response, Arkansas Education Association President Cathy Koehler said that she was troubled that he chose "to lash out at professionals."

Key took to traditional and social media channels to say that the union of teachers and support staff, along with its supporters, are wrongly saying that the number of Little Rock schools in academic trouble worsened under the state's watch, increasing from only six schools to 22 schools since January 2015 when the state Board of Education took control of the district.

That 2015 takeover occurred because six of the district's 48 schools had been state-labeled as academically distressed for chronically low scores on state-required tests. But the Little Rock district at the same time had 21 schools designated as being in "focus" or "priority" status under the old federal No Child Left Behind Act of 2002.

While academic distress was a designation under the state's school accountability law, the priority and focus labels were components of the federal law and indication of low achievement at a school or wide achievement gaps among student subgroups at a school.

Key said the labels on the 21 schools were "well documented publicly and thoroughly discussed by the Education Board" in 2015, and were a contributing factor in the board's decision to take control of the district by disbanding its locally elected school board and placing the superintendent under the direction of the education commissioner.

"Many of these same schools now have D or F school ratings, affirming what I stated last week that, while there has been improvement, it has not been consistent and sustainable," Key said about his motivation for seeking concessions on employment protection laws.

"This idea that we had six failing schools and now we have 22 is just totally false," he also said in an interview, and "far beyond an apple to apples comparison." He said the union and their allies know that, but are trying to muddy the waters.

Koehler, president of the Arkansas Education Association, the parent organization to the Little Rock union of teachers and support staff, objected Friday to Key's comments, including his assurances of due-process rights to a hearing if an employee is ultimately recommended for firing from one of the 22 schools.

"It is disconcerting that he chose social media to lash out at professionals who have served this city and the students and their families for over 52 years," Koehler said about Key.

"In the best interest of everyone, Commissioner Key needs to strongly consider holding at least one open forum where all of the public can hear from him and LREA president Teresa Gordon," Koehler also said.

At such a forum, Key, Gordon and members of the public -- including interested students -- can share concerns and seek answers to questions, she said.

Gordon could not be reached for comment Friday afternoon.

Koehler said Gordon couldn't talk to reporters because the association and school district teams that are attempting to reach a tentative agreement on the proposed waiver have agreed not to make any public comments while the negotiations are underway.

The negotiating teams met a couple of times this week and will reconvene Tuesday. In the meantime, school employees and supporters have conducted informational pickets at different campuses and at the Governor's Mansion in opposition to the waiver proposal.

Key said Friday that he has received emails and calls about the issue. Some have copied their emails to the commissioner to social media sites for wider viewing.

Michael Mills, who is an associate professor at the University of Central Arkansas and Little Rock district parent, has a widely shared Facebook post in which he said student achievement and school ratings are more reflective of poverty and race rather than any difficulty in firing ineffective teachers.

On Oct. 22, Key rejected a tentative 2018-19 working agreement that was reached by district and association leaders. He directed Little Rock Superintendent Michael Poore to return to the negotiating table to get Gordon and the association to agree to a waiver of the Teacher Fair Dismissal Act and the Public School Employee Fair Hearing Act in the 22 Little Rock schools that recently received D and F state ratings.

Act 930 of 2017 authorizes the waiver of the employment protection laws in school districts that are in the Level 5-Intensive Support category of the state's school accountability system. The Little Rock district falls in that category.

A waiver of the Teacher Fair Dismissal Act would eliminate steps that principals must take -- including classroom observations and preparation of teacher improvement plans -- before firing a teacher. The waiver is intended to give school leaders a quicker and easier process for firing an incompetent employee, Key has said.

Association leaders have publicly and vehemently objected to the proposed waiver but did agree to return to the negotiating table about it.

The proposed waiver of the employment protection acts would ultimately have to be approved by the state Board of Education.

Key initially planned to ask the Education Board for the approval at its next meeting, which is Thursday. Although the proposal remains on the Education Board's agenda, Key said Friday that he won't ask the board to address the issue so as to give time to the negotiators to reach a settlement.

Actually on the bargaining table is a 10-page "Professional Negotiated Agreement" that includes provisions on recognizing the association as the exclusive representative of all nonadministrative employees in talks about the economic conditions of employment. There are provisions in the existing 2017-18 agreement and in the proposed agreement for this school year calling for salaries to be based on salary schedules. Other provisions deal with insurance benefits, and with sick leave and grievance procedures.

Key said Friday that the 2018-19 contracts for individual employees including their compensation and benefits won't change in the middle of the school year.

"The linking somehow of the expiration of the professional negotiated agreement to an impact on individual teacher contracts is just a false narrative," he said.

Key and Koehler disagreed Friday on whether waiving the Teacher Fair Dismissal Act in the D and F schools -- which include three Little Rock high schools -- eliminates an affected employee's due-process rights to a hearing to defend himself against the reasons for firing.

"The union is sowing seeds of fear with respect to the loss of due process, that the removal of Teacher Fair Dismissal will remove any due process protection for teachers, and that is just not true," he said, citing Arkansas Code Annotated 6-17-208 that requires every district to have a grievance procedure.

"It's a multilayer grievance procedure," he said. "It includes an appeal to the superintendent and it includes a hearing before the school board. In Little Rock that would be an appeal to the Community Advisory Board" that makes recommendations to the commissioner on personnel matters.

"It covers a number of things, including terms and conditions of employment. We're not seeking to waive that. Little Rock has a grievance procedure in its district policies, and there there is the Teacher Excellence and Support System, which includes elements for helping teachers to improve in their work. "

Koehler, who is a Little Rock district employee on leave to serve as the association president, said the district's grievance procedure is a means for an employee to address working conditions, short of termination recommendations.

The professional negotiated agreement for 2017-18 and the one proposed earlier for 2018-19 defines grievance as "any concern related to personnel policy, salary, federal or state laws and regulations, or terms or conditions of employment raised by an employee, except the recommendations for non-renewal, termination or suspension under the Arkansas Teacher Fair Dismissal Act ... and the Public School Employee Fair Hearing Act are excluded from this grievance procedure and are governed by the requirements of those statutes."

Also on Friday Key discounted arguments that removing employment protection rights at schools rated D and F will deter good teachers from working at the schools where students have great academic needs.

"There are other schools that have waivers from the Teacher Fair Dismissal and I've not heard of any of those schools have had trouble recruiting or retaining teachers," he said, adding that the schools could become more desirable workplaces if the waiver is exercised properly.

Key said members of the public and even teachers who have reached out to him through emails and letters have indicated uncertainty and fear about the waiver proposal and that a lot of the fear "is driven by misinformation."

"Let's deal with facts. These schools have been struggling since before state takeover. We aren't out for mass firings. We're not out to impact individual contracts with respect to salaries and benefits, and there will be a due process procedure in place," he said.