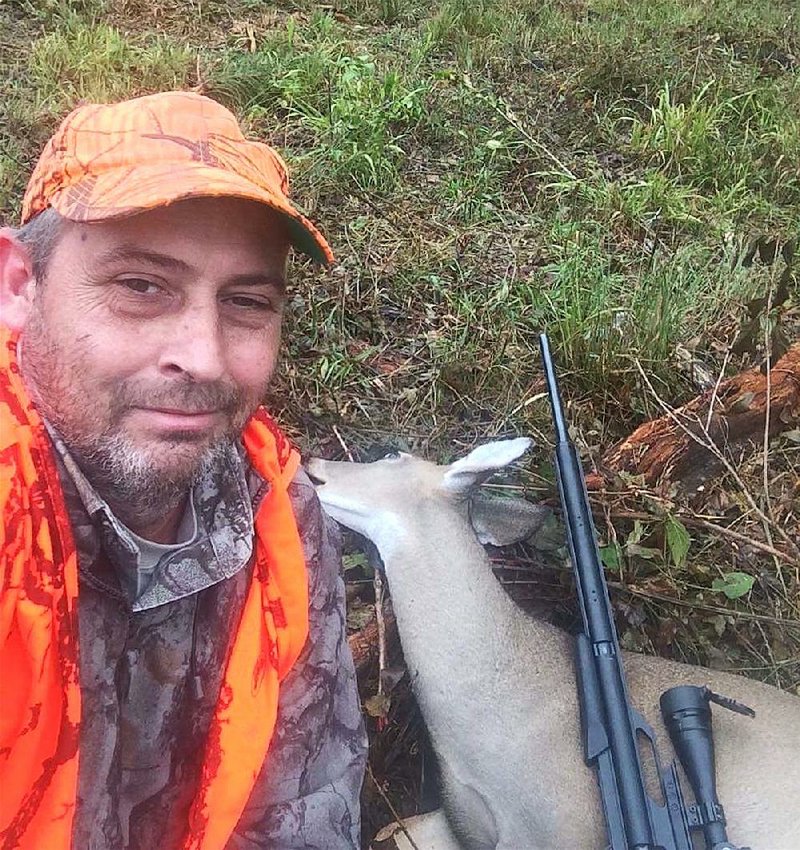 Seth Rowland of Hot Springs took this doe with a .457-caliber air rifle during the Private Lands Antlerless Only Modern Gun Deer Season. It is believed to be the first deer taken with an air rifle in Arkansas since the Arkansas Game and Fish Commission legalized air rifles for deer hunting.

Seth Rowland of Hot Springs reaped the fruits of persistence on October 14 when he killed a deer with a big-bore air rifle.

Rowland's doe is believed to be the first deer taken with an air-powered firearm since the Arkansas Game and Fish Commission legalized big-bore air rifles for deer hunting in June. He killed the deer during the private lands antlerless only modern gun deer season that was held statewide Oct. 13-17.

The state's most prominent advocate for hunting big game with air rifles, Rowland campaigned for about three years to persuade the Arkansas Game and Fish Commission to legalize deer hunting with air rifles.

Until 2014, the agency allowed some hunters to use air rifles to shoot deer on a case by case basis, but Rowland and others were uneasy about potential exposure to citations for using unauthorized means of taking game. Rowland asked the commission to legalize air rifles for deer hunting in 2015, but instead, the commission did the opposite. It specifically classified air rifles as unlawful for air rifles on recommendation from its law enforcement division, which believed air rifles were too efficient a tool for poachers.

With help from Howard Robinson of Mansfield, a longtime hunter education instructor, former president of the Arkansas Wildlife Federation and a national volunteer organizer for United States Shooting Sports Foundation, Rowland kept trying. He and Robinson convinced the commission that certain size air rifles are a legitimate and ethical hunting tool, and the commission codified their use for deer hunting in June.

To be legal for deer hunting in Arkansas, an air rifle must be at least .40-caliber, must produce at least 400 foot pounds of energy at the muzzle and be charged from an external tank.

"This isn't a CO2-powered pellet rifle, but one that is charged with a scuba-style tank holding 3,500 to 5,500 pounds per square inch," said Ralph Meeker, deer program coordinator for the Game and Fish Commission. "The bullet also must be a single, expandable slug, not just a pellet."

Rowland celebrated his citizen's triumph by bagging a doe with an Air Force Texan 457, which discharges a 45-caliber bullet with a muzzle velocity of about 850 feet per second. That's about the same as the 45 ACP, the vaunted sidearm of the United States military for decades, and the host cartridge for the Thompson submachine gun.

"It was pretty satisfying," Rowland said. "It didn't matter that it was a doe. It was a trophy in its own right."

Opening day of the private lands antlerless only season found Rowland on his father-in-law's farm, where deer are rife.

"He's got way too many deer as far as does eating his garden," Rowland said. "He's been wanting me to come down for awhile."

Rowland and his father-in-law cut a lane in which Rowland planned on shooting a doe at a range of about 30 yards.

"There's a hot scrape there," Rowland said. "It was supposed to rain heavy, so I was pretty happy for a minute."

Instead of a doe, an immature buck with spike antlers entered the clearing. It was not legal to kill that deer, and when it started raining, Rowland went to the house.

Conditions were identical the next day, except a little warmer. Deer didn't move until about 11:30 a.m., and a doe entered the clearing about 120 yards away. When it closed the distance to 100 yards, Rowland said he was confident.

"When it hit the 100-yard mark, I felt real good because I practice with that a lot."

One shot crumpled the doe.

Air rifles are expensive initially, but Rowland said the costs balance with those of centerfire rifles over time because they are so much cheaper to shoot. It's even cheaper for Rowland because he makes, or casts, his own bullets.

"I like the freedom," Rowland said. "I don't have to buy my air. I don't have to buy bullets. I'm ever at a shortage. I remember people hollering about the shortage of ammo a few years ago. They couldn't find find bullets at Walmart, but I was shooting all the time."

Instead of tinkering with powders, primers, headspacing and other factors to improve centerfire accuracy and velocity, Rowland merely adjusts a valve to propel bullets faster or slower.

"It's cheaper in the long run," Rowland said. "You can buy a little compressor for about $500, and that will give you a lifetime supply of air as long as you take are of it. If you can come up with some soft lead, scrap lead or if you buy bullets online, you can play with that inexpensively."