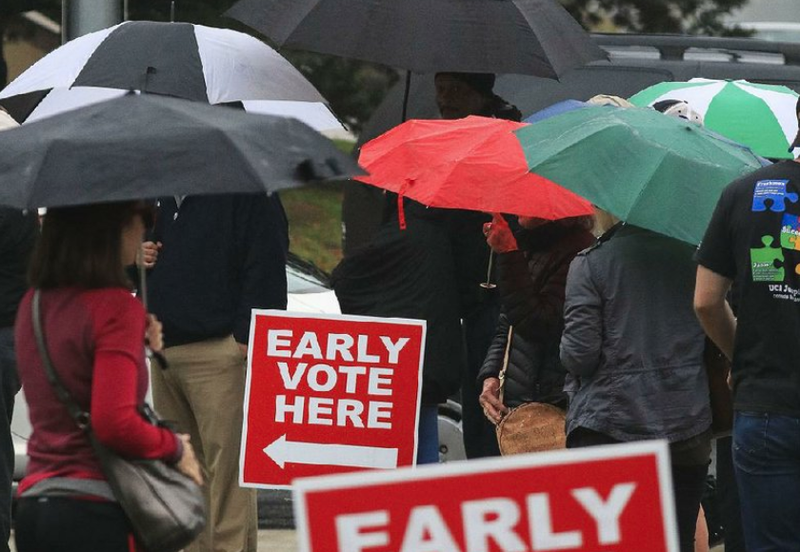 Voters take shelter under umbrellas as they wait in line Monday to vote at the Pulaski County Regional Building on the final day of early voting. Polls open again across the state at 7:30 a.m. today.

Even without final-day numbers, early voting in Arkansas in this midterm election eclipsed the record turnout of the last non-presidential election four years ago.

As of Monday morning, 398,459 Arkansans had voted early, according to the secretary of state's office, up from 357,086 for the entire early voting period in 2014. A spokesman for the office said that the final early voting tally -- to include the ballots cast on Monday -- wouldn't be available until later today.

However, election officials across the state were hesitant to suggest that the high early vote totals indicate record-breaking turnout on Election Day, which is today.

"It very well could be that more people are liking early voting," said Bryan Poe, the Pulaski County elections director. "We won't know for sure until late [tonight]."

Today, Arkansans will elect congressmen in all four of the state's districts and all seven state constitutional officers. They'll also decide a runoff contest for state Supreme Court justice, 100 state House of Representatives seats and 18 state Senate seats. And many have city, county and school elections to decide.

Voters also will decide ballot measures that would, if approved, authorize the state to issue four casino licenses, raise the state's minimum wage by $2.50 an hour to $11 by 2020 and amend the state's constitution to require voters to present photo identification at the polls.

Chris Powell, a spokesman for the secretary of state's office, encouraged voters to get out and vote today. Voter turnout in non-presidential midterms like this cycle generally tracks about 15 percent lower than turnout in presidential years.

"The majority of people who vote still vote on Election Day itself," Powell said. "General election turnout pretty consistently averages around 50% in mid-term elections, so we will have to wait until the polls close to see if this is an outlier or in line with those trends." 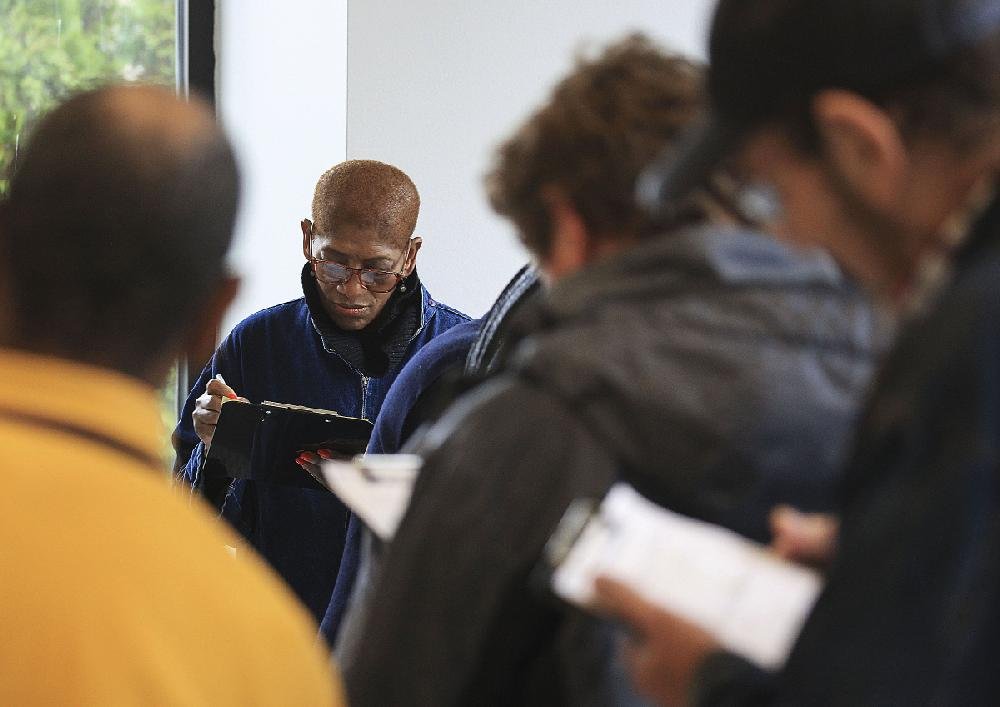 Derotha Webb-McIntosh fills out an early voter request form Monday before voting at the Pulaski County Regional Building on the final day of early voting.

In downtown Little Rock on Monday, a long line snaked out of the building that houses the Pulaski County Election Commission. Dozens of voters waited patiently to cast their ballots on the last day of early voting.

They huddled under umbrellas and bundled in their raincoats as the rain drifted between a light drizzle and moderate shower.

Jonathan Mayfield of Little Rock said he hadn't been this motivated to vote in years, and he said he had no problem waiting in the rain. He was particularly excited about the Little Rock mayor's race.

"There's three really good candidates," he said. "It was hard to choose just one."

He also planned to vote to raise the minimum wage and expand casino gambling in the state.

Benton County officials reported an early vote turnout of 47,168 compared to the midterm of 2014 where 30,096 registrants voted early. The increase is almost 57 percent.

In Fayetteville, several voters said they stood in line for 35 to 40 minutes on Monday afternoon to vote at the Washington County Courthouse.

"That's not bad at all," said Jamie Smith. "It took me longer to find handicapped parking than it did to vote."

The Washington County clerk's office in the courthouse was the only polling place in the county open for early voting on Monday.

By comparison, Smith said it took her 2.5 hours to vote in Elkins on election day in 2016.

She said several people brought young children with them on Monday.

"It felt like they brought them here to let them see the process," said Smith. "It's completely peaceful in there. I can tell you there are people from all different backgrounds [in the line]. We were all joking."

Chloe Keeling, 19, said she voted for the first time on Monday. She's a student at the University of Arkansas in Fort Smith. She drove to Fayetteville to cast her ballot in her home county and have lunch with her mother, Debbie Keeling.

"When you turn 18 you get the right to vote and to make your voice heard," said Chloe Keeling.

Debbie Keeling said she voted Thursday at the Boys & Girls Club of Fayetteville, and there were only two people in line in front of her.

"I'm going to vote early from now on," she said.

The line at the courthouse wound down the stairs from the third floor and out the second-floor door, where Washington County Sheriff's Deputy T. Lau was verbally screening voters as they approached the building under the covered walkway.

"No pocket knives or wallet ninjas," she shouted to the men.

"No pepper spray," she said as women approached.

Several people turned around and headed back to their vehicles in the parking lot.

"Honestly, it seems like early voting numbers have been trending up compared to previous midterms," Holliday said. "We usually only have 40 percent of the votes cast on election day because early voting has seen an uptick."

The county is using new voting machines for this midterm election, and three new locations have been opened for early voting.

"This is a heavy turnout for a midterm," Crawford said. "For example, we had 5,300 votes all together during the primaries earlier this year. I have been doing this for 12 years and this probably the heaviest turnout for an election that wasn't presidential."

Tiffany Lowery, chief deputy clerk for Jefferson County, said 7,260 early votes had been cast as of Saturday. That isn't a huge change from previous years, she said.

About 17,000 people are expected to have voted early in Sebastian County by the end of Monday, County Clerk Sharon Brooks said. As of 2 p.m. Monday, she said, 16,311 voters had cast early ballots. She was expecting a surge in voting at the end of day as people got off work and stopped to vote on the way home.

"We're having a pretty good election compared to past numbers," she said.

Brooks attributed the heavy turnout to the long ballot.

She said the software on the county's year-old voting machines can track the age of voters.

Sarah Hardin of McGehee requested an election monitor be sent to Desha County because there have been many election complaints and problems over the past few years, she said in her written request.

The monitor will observe the election as it relates to the duties of the county Board of Election Commissioners, including the processing of absentee ballots and election returns and voting at various polling sites, Shults said.

Thomas Henry, a candidate for Blytheville mayor, requested a monitor in Mississippi County because, he wrote in his request, multiple people in Blytheville told him that elections in 2016 and 2018 have had candidates that "pay money/goods to buy votes through the practice commonly referred to as 'hauling.'"

Shults said that paying for votes is difficult to detect by an election monitor.

"However, we are going to send the monitor to observe in various polling locations to ensure no wrong conduct is occurring in the poll," Shults said in an email. "The monitor will also be able to assist in ensuring that no person, other than the poll worker, has assisted more than six individuals with voting in this election."

Kenneth Cross of Earle wrote that he requested an election monitor in Crittenden County because Earle had problems with voter fraud.

Shults said a monitor will observe at two voting locations in Earle that were named in the complaint and will observe the tabulation of results.

Shults added that "sending the monitors does not constitute a finding by the [board] that the allegations in the request are true or even substantiated."

Information for this article was contributed by Bill Bowden, Stephen Simpson, Dave Hughes and Michael R. Wickline of the Arkansas Democrat-Gazette. 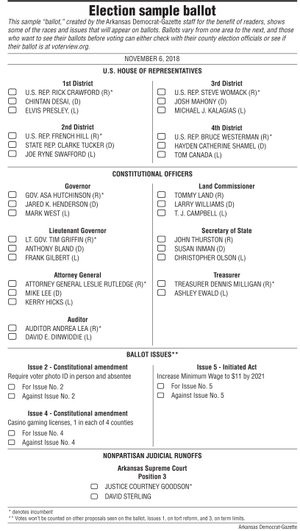 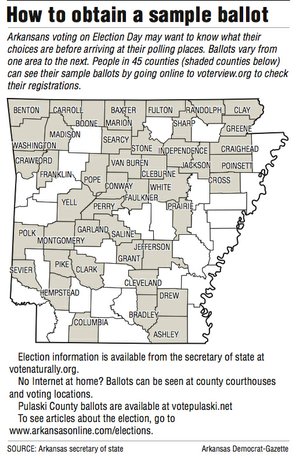