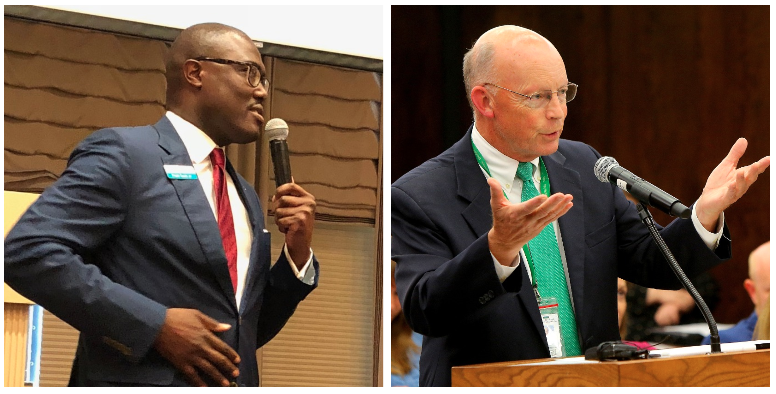 Baker Kurrus and Frank Scott Jr. will advance to a runoff in the Little Rock mayor’s race after none of the five candidates reached 40 percent of the vote.

Scott had the most votes in Tuesday’s election with 25,075 votes, or about 37 percent, according to unofficial results with all precincts reporting in Pulaski County. Kurrus came in second place with 19,619 votes, or about 29 percent.

Kurrus and Scott will face off in the runoff Dec. 4.

The latest results in the Little Rock mayor's race show:

Nearly 85 percent across the county as a whole has been counted.

If none of the five candidates reach 40 percent, the top two candidates will advance to a runoff.

Vincent Tolliver was in fourth with 1,559 votes, followed by Glen Schwarz with 1,416 votes.

Check back with the Arkansas Democrat-Gazette for updates.

State Rep. Warwick Sabin was in third with 9,735 votes, followed by Vincent Tolliver in fourth with 1,057 votes.

Glen Schwarz was in last with 818 votes.

One of the five candidates must receive 40 percent of the vote to avoid Little Rock's first runoff election. Scott's total at 7:30 p.m. stood at just under 38 percent.

Early voting results came on the TV and the crowd at (first-place candidate) Scott’s watch party was excited, to say the least. pic.twitter.com/XJxCDYpKPU

Check back with the Arkansas Democrat-Gazette for updates on this developing story.EARLIER