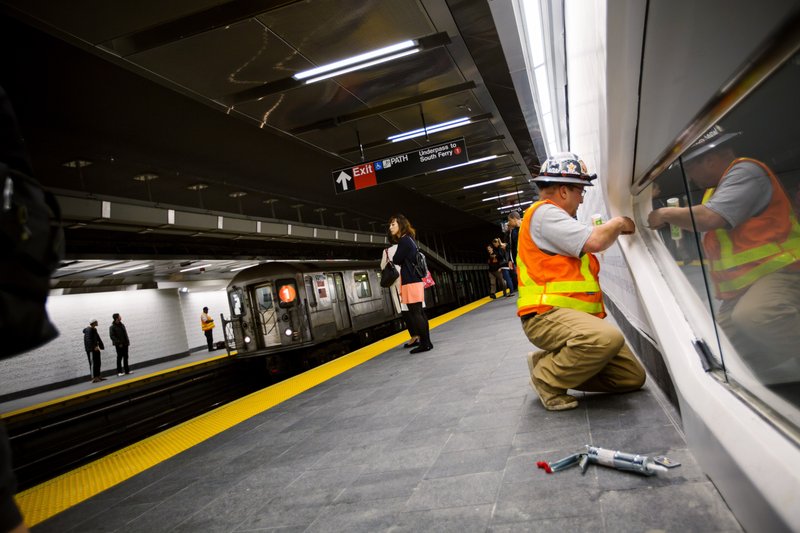 Starting about three years ago, Americans were asked to insert or dip their credit cards at the checkout instead of swiping them. Now, thanks largely to the New York subway, they'll soon be tapping.

Starting next year, New York's Metropolitan Transit Authority will join other transit systems around the U.S. in saying goodbye to paper Metrocards as it introduces a new payment system that allows riders to tap their credit or debit cards at turnstiles. To prepare, the country's largest banks have begun to issue so-called contactless cards that will work with these new systems.

"The credit card and banking industries are working in parallel with us," said Patrick Foye, president of the Metropolitan Transit Authority. "This is where transactions -- not only in transit but outside transit -- are increasingly going to be in the United States."

Visa Inc. predicts 100 million of its cards in the U.S. will be converted to contactless by the end of 2019. Some issuers have already begun the transition: at Capital One Financial Corp., the company's Quicksilver, Savor and Venture card portfolios are already enabled for tap-to-pay.

The transition to chip cards in the U.S. sparked months of consumer frustration because the checkout process got longer and store clerks had little training on the new technology. It was also a difficult transition for merchants who were beset by higher fraud losses as they endured a lengthy equipment-certification process.

That shouldn't be the case with the adoption of contactless cards roughly half of all in-person transactions in the U.S. occur at a merchant that's already enabled to accept tap-and-go payments. And a contactless transaction should take no more than 2 seconds, while chip transactions can take from 10 seconds to 39 seconds.

"A few years from now, dipping may seem like something we did a long time ago," Julie Pukas, head of U.S. cards and merchant services at Toronto-Dominion Bank. "Once we start seeing consumers use these cards everyday in a transit area or, for example, in surrounding merchants, I think it will be a very easy adoption for customers and they will really like the speed."

There's still some work to be done: 30 percent of the top 100 merchants in the U.S. don't accept contactless payments, among them Walmart Inc.

Some retailers have been hesitant to allow contactless card acceptance in their stores because that would mean they also would have to accept all forms of mobile payments. In recent months, merchants have been lobbying regulators and lawmakers over mobile payments and their use of a tokenization technology developed by Visa and Mastercard Inc. to enhance payment security. Merchants have said the new technology stops them from routing their payments over alternative, cheaper debit networks.

But for banks, the push from transit systems around the country to move to tap-to-pay systems will help accelerate change. It also comes with benefits to the bottom line: by transitioning to contactless, banks could boost profits by $2.4 billion and eliminate $22.2 billion worth of expenses in the next five years, researchers at A.T. Kearney said in a report sponsored by Visa. That's because contactless transactions often replace cash.

"The fact that, from an issuer perspective, the only real opportunity to transact at that turnstile is contactless only, really drives the value proposition," Dan Sanford, vice president of consumer products at Visa. He said issuers often tell him "if the only way for my cardholder base to transact at that turnstile is going to be with a contactless product then I need to be participating in that solution."