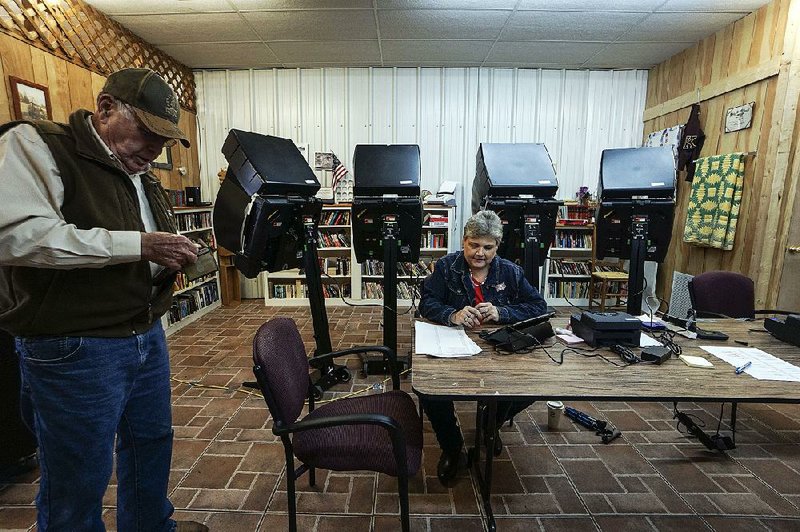 Kenneth Cole of Keo prepares to show his identification to election official Lynda Staton on Tuesday at the Keo City Hall.

Arkansans should have to present photo identification while casting their ballots in elections, the state's voters decided Tuesday.

Issue 2 amends Article 3 of the state's constitution to include the requirement.

The amendment is the most recent in a string of efforts led by Republican state lawmakers to require photo identification at the polls.

While voters were required to present photo IDs at the polls Tuesday under current state law, passing Issue 2 ensures that similar requirements are in the state constitution.

"I think this is resounding 'yes' that we want to have ballot security," said Rep. Robin Lundstrum, R-Elm Springs. Lundstrum was the Arkansas House sponsor of the measure that referred the ballot issue to voters.

The Arkansas Legislature can refer only two issues to voters during a general election, Lundstrum said, and the voter identification referral showed that protecting Arkansans against the possibility of voter fraud is a priority for lawmakers.

Others lamented Tuesday's returns, fearing that the requirement will prevent lower-income or elderly people, who may not have valid IDs, from voting.

The American Civil Liberties Union of Arkansas opposed Issue 2, arguing that it has seen evidence of such disenfranchisement "firsthand."

In the statement, Sklar called for state lawmakers to pass measures in 2019 to expand voting rights, such as implementing automatic voter registration.

Under current law -- Act 633 of 2017 -- if a voter, with a few exceptions, does not have valid photo identification, he could cast a "provisional" ballot and either sign a sworn affidavit attesting to his identity or present the correct photo identification to his county clerk or county election commissioners for his ballot to be certified.

For provisional ballots to be counted, they must be certified by noon on the Monday after the election.

Under the amendment, voters without proper identification can cast provisional ballots, but the amendment does not specify how to get the ballot counted except "in a manner provided by law." Lundstrum said the intent of Issue 2 is to use the procedures outlined in current law during the legislative process to implement the amendment.

The type of "valid identification" accepted at the polls is not specified in the new amendment. However, the state constitution's Amendment 51, which deals with voter registration provisions, says that documents and identification cards that are accepted as verification of voter registration can include driver's licenses, a photo ID card, a concealed handgun carry license and a U.S. passport, among several other documents. The ID must show the voter's name and photograph, must be issued by the state or federal government and must not have expired more than four years before Election Day.

In 2013, the Arkansas Legislature passed Act 525, which required photo identification but did not allow voters to sign sworn affidavits attesting to their identities. In 2014, the Arkansas Supreme Court overturned the law because it improperly added requirements to the voting process.

The Arkansas Legislature passed with a two-thirds majority the current voter identification law in Act 633 of 2017, which was nearly identical to the 2013 law but added the option for voters without IDs to sign sworn affidavits under the penalty of perjury.

In October, the Arkansas Supreme Court upheld Act 633 as constitutional in a 5-2 vote after a poll worker challenged the law. The poll worker argued that the law was already disenfranchising voters.

The court said it was not a clear violation of the state's constitution. The two dissenting justices contended that the law was invalid because it imposed requirements that weren't included in the voter registration process.

Voters already can obtain free photo IDs from county clerks offices that would be valid in an election.

Information for this article was contributed by John Moritz and Hunter Field of the Arkansas Democrat-Gazette.