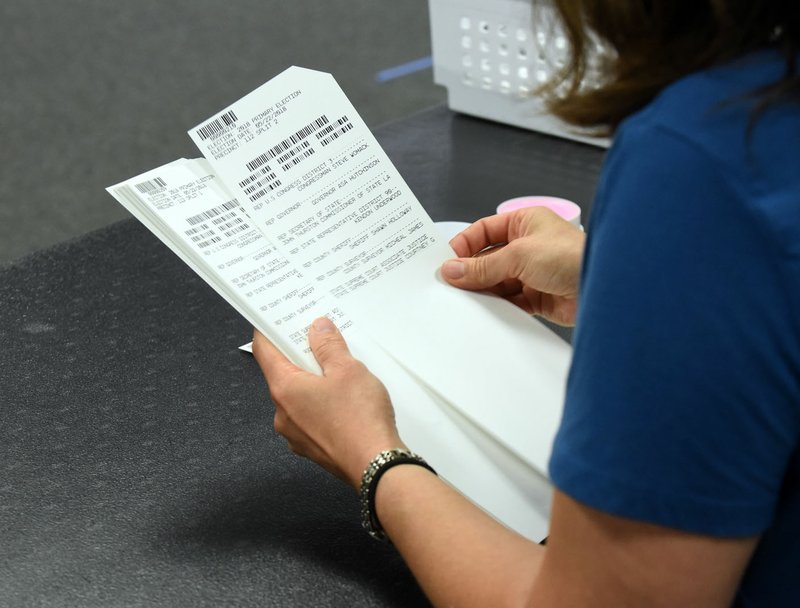 Ballots are recounted by hand at the Benton County Election Commission office in Rogers.

Kim Dennison with the Benton County Election Commission said no election outcomes were affected by the missing votes, which were from the Centro Cristiano de Rogers location on First Street.

The thumb drive was found Wednesday at the bottom of a bag brought in from the vote center location Tuesday night. In all, 897 votes were missed.

She took the election tape, a printout of all votes cast at the location, and manually added the numbers to see if any races changed.

Dennison said Christie Craig, a Democrat running for the Arkansas House District 96 seat held by Rep. Grant Hodges, was looking at precinct by precinct numbers on the state election website and noticed the numbers from that area of Rogers seemed low. Craig contacted the Election Commission.

In the Ward 1, Position 1 seat on the Rogers City Council, Mandy McDonald Brashear added 292 votes cast for her. She had 6,519 votes (47 percent). Shawn Wright had 155 votes at that site. He was in second place with 2,855 votes (21 percent). Clint Hopper had 76 votes cast for him and Rick Stocker got 66 at that location. Hopper was third and Stocker was fourth in Tuesday's voting.

Nothing can be done with the thumb drive until 4 p.m. Friday when the Election Commission meets in Rogers. Amended preliminary and unofficial votes will then be amended, Dennison said. Election results will be certified next Friday.