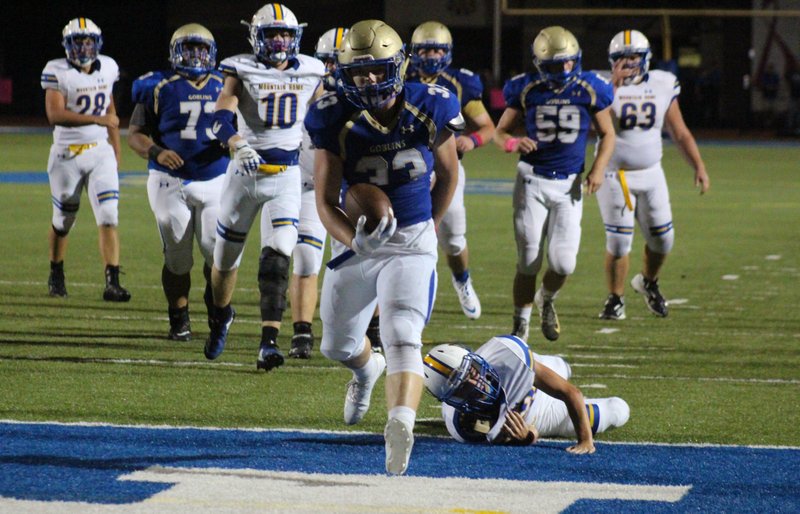 COURTESY PHOTO/Bobby Jones Harrison junior Brooks Both runs into the end zone for a touchdown during the Goblins' 56-7 victory over Mountain Home on Aug. 31 at F.S. Garrison Stadium in Harrison. Both is usually the Goblins' fullback and is a blocker, but he's also their defensive captain and leading tackler as a linebacker.

HARRISON -- When Brooks Both is on the football field, chances are good it won't take long for him to run into an opposing player.

The Harrison junior may even arrange an impromptu meeting, although the introductions might be a little rough.

"I enjoy hitting," he said. "It's my favorite part of the game. I love tackling people."

There is little relief in sight for opposing teams. Both makes his presence known on both sides of the ball for a 10-0 Harrison team that hosts White Hall in tonight's opening round of the Class 5A state playoffs.

Offensively, the 6-foot, 228-pound Both lines up at fullback and provides blocking for Goblin teammate Gabe Huskey, although Both has carried the ball 16 times for 106 yards and four touchdowns and caught two passes for 59 yards this season. He's also the defensive captain at linebacker, where he picks up the signals from the Harrison sidelines and relays them to his teammates, and he has a team-high 92 tackles entering tonight's contest.

"He's definitely our leader on defense," Harrison coach Joel Wells said. "He's probably the most physical kid in our conference. We pretty much envisioned what he was going to do for us on defense. He also became a vocal leader that was hard for him to be a year ago as a sophomore.

"He also plays on offense, where he's blocking a lot for Gabe and clears the way. He's a very unselfish player. He's been everything as advertised because he's done everything we've asked him to do."

It didn't take long for Both to make his presence known in the high school ranks last fall. He started at linebacker -- his favorite -- and recorded 16 tackles in Harrison's season opener against Mountain Home, and he had a 50-yard touchdown run the following week against Siloam Springs.

He finished the season with 63 tackles, and it also gave him the experience and the maturity he needed to be the Goblins' defensive leader.

"The experience lets me know what's going on, and it has slowed the game down some," Both said. "It allowed me to trust my reads more. That way I can see the play develop and go."

He could have taken things a little bit easy last week in the regular-season finale against Farmington since Harrison already had clinched the 5A-West Conference championship a week earlier. Instead, with the Goblins' perfect season still in reach, he delivered one of his better performances as he recorded 13 tackles.

"He worked extremely hard in the offseason," Wells said. "He became stronger, and he trimmed down a little so he could be a little faster. He also had a little bigger role this year on offense.

"Against Farmington, he proved he was the most physical player on the field. He had some devastating blocks and made tackles all over the field, which he has done most of the year. You could tell by the way he played and the way he prepared he wasn't going to let us go through the motions. Being 10-0 was important to him and our football team."

NOTABLE He’s the Goblins’ defensive leader with 92 tackles through the regular season, including a season-high 16 against Siloam Springs and 13 tackles last week against Farmington. … Also serves as the fullback on offense and blocks for Gabe Huskey, although he has 16 carries for 106 yards and four touchdowns and two receptions for 59 yards. … Had 16 tackles in his high school debut last fall during Harrison’s season opener against Mountain Home.