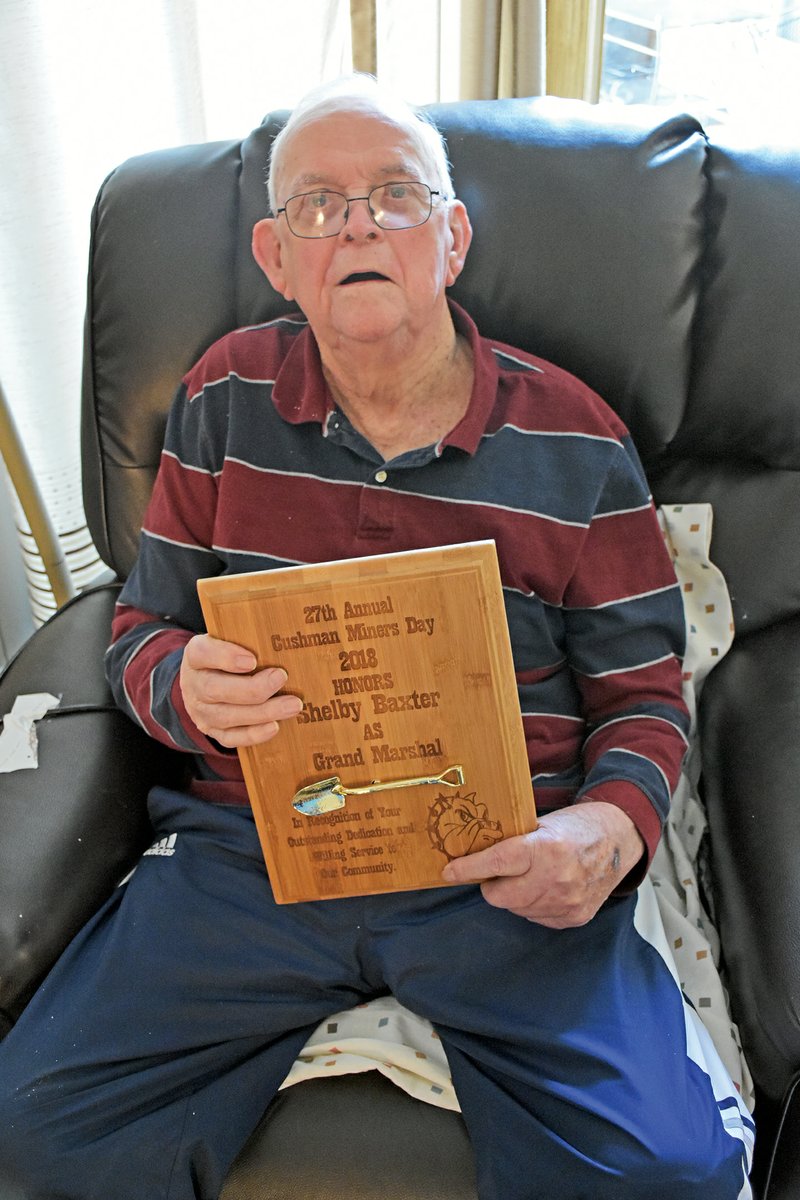 Shelby Baxter, 87, of Batesville shows the plaque he received for serving as parade marshal in this year’s Cushman Miners Day celebration. Both of his grandfathers worked in the manganese mines near Cushman. Baxter was born in Cushman and joined the Navy in 1951. ( Staci Vandagriff)

BATESVILLE — October was a busy month for Shelby Baxter.

He celebrated his 87th birthday on Oct. 27. Just a few weeks before that, he and his wife, the former Marilyn “Mary” Wyatt, 85, celebrated their 63rd wedding anniversary on Oct. 16. And just a few days before that, Baxter served as grand marshal of the annual Cushman Miners Day Parade on Oct. 13.

Today is a special day for Baxter as well, as he is among those who will be remembered in Veterans Day observances throughout the area. He served in the Navy from 1951 to 1955.

Local Veterans Day observances will include a Salute to Veterans tribute during the 10:50 a.m. service at Central United Methodist Church, where Baxter and his wife are members.

“We won’t be able to go this year,” Mary Baxter said, “but his photo is in the video that they play each year to honor veterans.”

Baxter was born in Cushman, a son of the late Remmel M. and Mary Wilson Baxter, and has one brother, Reginald Baxter.

According to the website encyclopediaofarkansas.net, Cushman was the center of the manganese-mining industry in the state. Manganese is an alloy agent in the manufacturing of steel.

Shelby Baxter’s grandfathers — the late William Robert “Willie” Baxter and Robert “Bob” Wilson — both worked in the mines, which were in operation from the mid-1880s until 1959.

“When they called me and asked me to be grand marshal of the parade for this year’s Miners Day celebration, I thought, ‘They’ve gone crazy,’” he said, laughing. “But I accepted the honor and was very impressed with the day’s activities.

“I waved and threw candy [in the parade]. I rode in a convertible that my granddaughter Courtney was driving. Most of my family was here for the day, and that was special.”

Baxter said the Miners’ Day celebration began about 20 years ago as a homecoming for residents of the community.

“Daddy owned a general store in Cushman,” Baxter said, recalling growing up in the small town a few miles northwest of Batesville.

“He always had something to fit the occasion. The miners would come in and get something to eat. … They probably ate a lot of baloney sandwiches,” he said.

“I was what you might call a rabble-rouser in high school. My dad was on the school board. When I was in 10th grade, he told me, ‘I’m going to send you to Batesville. They’ll straighten you out.’ So I graduated from Batesville High School in 1949,” Baxter said.

“I did my basic training at Corry Field in Pensacola, Florida,” Baxter said. “I was then assigned to the Naval base at San Diego, California, as part of the VC-7 Squadron. I worked in personnel. The VC-7 Squadron was assigned to protect the atom-bombers on aircraft carriers. We had top-secret classification.”

He attended a naval air school in Maryland before being deployed to North Africa, where he spent about a year at the U.S. Naval Air Facility at Port Lyautey in French Morocco.

“This was during the Korean conflict,” Baxter said. “We went to Morocco because we were told to do so. We were on the same base with Frenchmen; Morocco was their base. It made me realize how fortunate I was to be in the United States Navy. … We were treated well.”

Baxter said he was able to travel to other parts of the world while he was in Morocco.

Baxter completed his four-year tour with the Navy in 1955.

“I came home and married her,” Baxter said, smiling at his wife. Mary Baxter graduated from Batesville High School, too, but the two did not start dating until he was in the Navy.

“I called her — collect — from Morocco and asked her to marry me,” he said, laughing.

“College didn’t work out then, either,” he said, laughing.

“I took a job in the welfare office at Batesville, where I stayed for 30 years,” he said. “I was involved in implementing the first food-stamp program in the United States.

“I said, ‘This will never fly,’” he said. “Of course, it did. I ended up as county supervisor, working for the Arkansas Department of Human Services. I retired after 30 years.”

Mary received her registered nursing degree at St. Vincent Infirmary School of Nursing in Little Rock in 1953. She retired after a 40-year career in nursing.

The Baxters have three adult children.

Shelby and Mary’s younger son, Scott Baxter, 57, and his wife, Mary, live in Centerville, Georgia. Their older daughter, Whitney Conard, 28, and her husband, Russell, live in Indiana. Scott and Mary’s younger daughter, Courtney Baxter, 26, lives in Tupelo, Mississippi. The couple are also the parents of a son, Rhett Remmel Baxter, who died in 2015 at age 18.

Shelby and Mary enjoyed traveling after retiring. They have been to Ireland, Canada and Cancun and on an Alaskan cruise.

They also traveled across the United States, attending reunions with his naval squadron.

“We’ve been to Virginia Beach, Reno, D.C., Pensacola, San Diego and Nashville,” Baxter said. “I’m still in contact with some of them. … Most of us are dying off.

“I’ve always enjoyed getting out and being with people,” he said.

Baxter now has some health issues that keep him at home.