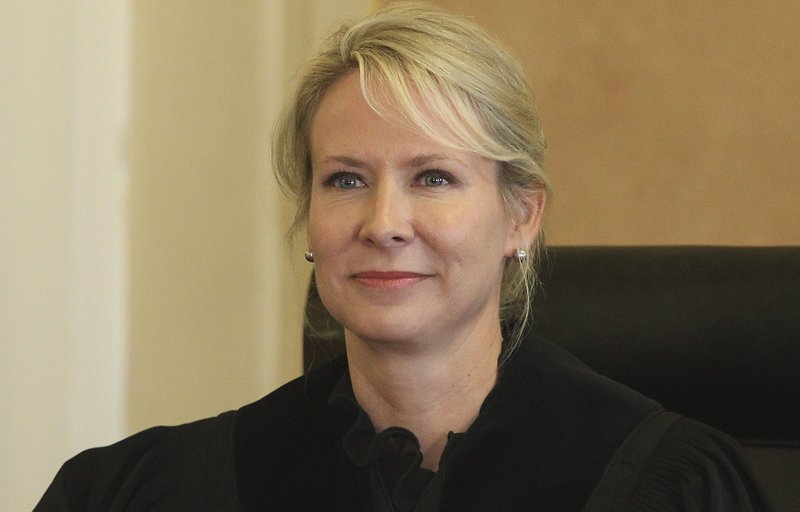 In winning re-election by more than 90,000 votes, Supreme Court Justice Courtney Goodson last week dispelled questions about how she was perceived by voters who had been bombarded by negative ads about her.

Will lawmakers do anything to curb such spending in judicial races, or end elections for Supreme Court justices altoether?

Will the prospect of those ads discourage potential candidates from running?

The day after the election, Gov. Asa Hutchinson quelled notions of any changes from the Legislature.

“I don’t think so,” said the governor, who had previously said he’d favor moving to an appointment process for justices.

“That didn’t catch on,” Hutchinson, also an attorney, said of his idea. “Fast forward to the present time … millions of dollars didn’t make a difference in the race. I think that will defuse any effort to change that, even though I’m not happy with it.”

In each of the previous two regular sessions, in 2015 and 2017, constitutional amendments were proposed to create an appointment system for Supreme Court justices. They died in committee.

House Speaker Matthew Shepherd, R-El Dorado, an attorney who once chaired the House Judiciary Committee, said he has not heard anything more than “comments, generally,” about the competitiveness of Goodson’s race against Department of Human Services attorney David Sterling.

Shepherd said he was unaware of any efforts to address either the outside money spent in the race or to change the election of justices.

Some out-of-state groups disclose their donors and others do not. Spending by the latter is sometimes referred to as “dark money.”

According to the Brennan Center for Justice, based in New York and Washington, D.C., 15 states, including Arkansas, elect judges to their highest courts through nonpartisan elections. Other states use some form of appointment or partisan elections.

In 2016, after two Arkansas Supreme Court races in which more than $1 million in outside spending flowed in and allegations of “dark money” attacks were raised, the Arkansas Bar Association drafted a proposed constitutional amendment to establish a commission that would recommend candidates for the Supreme Court. The final decision would be made by the governor.

The bar’s House of Delegates, however, fell short of endorsing the measure, after the seven current justices told the bar they opposed doing away with judicial elections.

However, two departing justices did not sign on to the letter sent to the Bar Association in 2016. One of them, former Chief Justice Howard Brill, said in an interview last week that calls for ending judicial elections, while popular in legal circles, never got “groundswell” support from everyday people or the Legislature.

“I don’t see any hint of any change coming for the foreseeable future,” Brill said in a phone interview.

Starting in 2014, four people running for the Supreme Court have been the target of attack ads funded by outof-state groups. One of them — Goodson — faced them twice.

Until Tuesday, not one of those targets went on to win.

Starting in the spring, the Judicial Crisis Network began airing ads panning Goodson as an “insider” with ties to trial lawyers. The ads focused on disclosures that Goodson made in her own public filings, that she’d received thousands of dollars’ worth of gifts from attorney John Goodson, whom she later married, and that the couple had gone on an Italian vacation paid for by a friend and attorney, W.H. Taylor.

The ads did not mention Goodson’s defense: that she had recused from all cases involving lawyers with whom she had personal financial ties.

The Judicial Crisis Network, which does not disclose its donors, had aired similar ads against Goodson when she made a run for another position, chief justice, in 2016. She lost that race by almost 89,000 votes to then-Circuit Judge Dan Kemp of Mountain View.

This year, Goodson sued the TV stations airing the Judicial Crisis Network’s ads. She won in one state court and lost in another.

The Judicial Crisis Network did not purchase any airtime ahead of the fall runoff. But another Washington group, the Republican State Leadership Committee, purchased hundreds of thousands of dollars’ worth of airtime to run nearly identical ads against Goodson.

The Republican State Leadership Committee discloses its donors on its IRS forms. Goodson sued the group, losing in federal court.

Both groups have histories of airing attacks in Supreme Court races.

In the May nonpartisan judicial election, Goodson and Sterling faced a third candidate, Court of Appeals Judge Kenneth Hixson.

The Judicial Crisis Network purchased spots in May calling Hixson “soft on crime” for writing an opinion that overturned a man’s rape conviction. Hixson finished third in the general election.

Hixson, who has four years remaining on his current term on the Court of Appeals, said Friday that the prospect of facing more negative ads would affect any future decisions by him on whether to run for a judicial seat again.

“I would have to think about my family and my reputation,” Hixson said. “It would definitely be a factor.”

Other candidates who have been targeted by outof-state attack ads expressed similar sentiments.

“I suspect it makes it harder for someone to want to go through that,” said Tim Cullen, a Little Rock attorney who ran for the Supreme Court in 2014. He lost to Justice Robin Wynne.

Candidates know “it’s going to be an extensive and nasty race,” Cullen said.

During the Cullen-Wynne race, a group called the Law Enforcement Alliance of America ran ads suggesting that Cullen thought “child pornography was a ‘victimless crime,’” based on a legal brief Cullen filed while representing a sex offender. Cullen contended that he never made such an argument.

Two years later, in 2016, Clark Mason, another Little Rock attorney, ran for the Supreme Court and was depicted in ads by the Republican State Leadership Committee as Clark “Ka-Ching” Mason, for fees Mason charged at his firm. The ad began with a photo of Mason and his wife dressed in formal clothes, which he said was taken at a charity event.

“Seeing how that affected my wife … ,” Mason recalled in a phone interview last week. “It was devastating.”

Mason lost that race to Shawn Womack, who now sits on the Supreme Court.

Candidates for political offices are barred from coordinating with outside groups that air ads on their behalf or against their opponents. As such, throughout Goodson and Sterling’s race, Sterling denied any involvement in the ads and said he was powerless to stop them.

Goodson, however, went on the offensive, using the hashtag “DarkMoneyDavid” in a series of social media posts. She also filed multiple lawsuits seeking to stop the ads.

In contrast to Goodson’s loss in the 2016 chief justice race, Goodson won all but eight of Arkansas’ 75 counties on Tuesday.

On election night, Goodson presented her re-election as a victory over “dark money” attacks, saying, “Arkansas courts cannot be bought.”

Other factors may have played a role in her win. Unlike Sterling, Goodson had the advantage of having the title “Justice” printed in front of her name on the ballot.

In interviews ahead of the election, several voters said they had been turned off by the repeated attacks on Goodson.

“I honestly don’t know” what effect the ads had, Sterling said Friday. “It did give my opponent a campaign theme.”

The Brennan Center reported in September that such national groups spent $8 million to support or oppose the nomination of U.S. Supreme Court Justice Brett Kavanaugh.

In a statement last week, a spokesman for the Republican State Leadership Committee said the group will “look forward to identifying future opportunities” to support candidates in Arkansas.

“Outside money is going to continue to roll into state Supreme Court races all over the country,” said Janine Parry, a political science professor at the University of Arkansas, Fayetteville. “What we just saw is a glimpse of Christmas future.”

The next Supreme Court elections will be in 2020, when the Position 4 seat, held by Justice Josephine “Jo” Hart, can be contested.