Arkansas pulls away from UC Davis in home opener 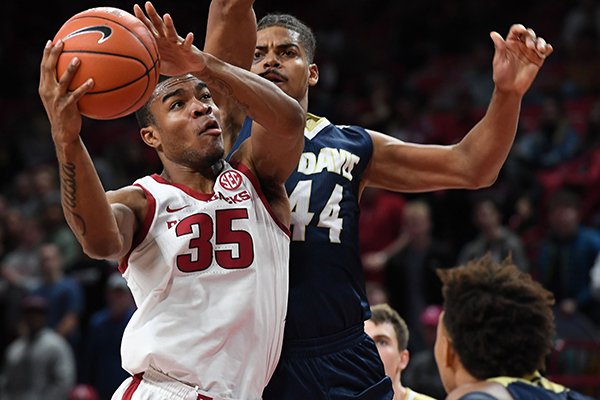 FAYETTEVILLE — Adrio Bailey and Mason Jones scored 20 and 21 points to lead the Razorbacks to a 81-58 win in their home opener against UC Davis.

Arkansas held the Aggies to 25 percent shooting in the second half and turned them over 24 times in the win. The Razorbacks turned those miscues into 26 points.

Arkansas guard Jalen Harris was the lone Razorbacks starter to not score in double figures Monday. He followed a 3/12 shooting effort against Texas with a 1/6 night against UC Davis. He scored just five points. Meanwhile, Isaiah Joe added 14 points on 4/7 from the floor and Daniel Gafford finished with 12 points and six more turnovers.

The Razorbacks' bench continues to be a bit of an issue. Prior to Keyshawn Embery-Simpson's 3-pointer in the game's final minute, Arkansas' four reserves had totaled just nine points. In two games, the group has scored just 16 points.

Arkansas' next game is Sunday against a very talented Indiana team that features guard Romeo Langford and one of the top recruiting classes in the country.