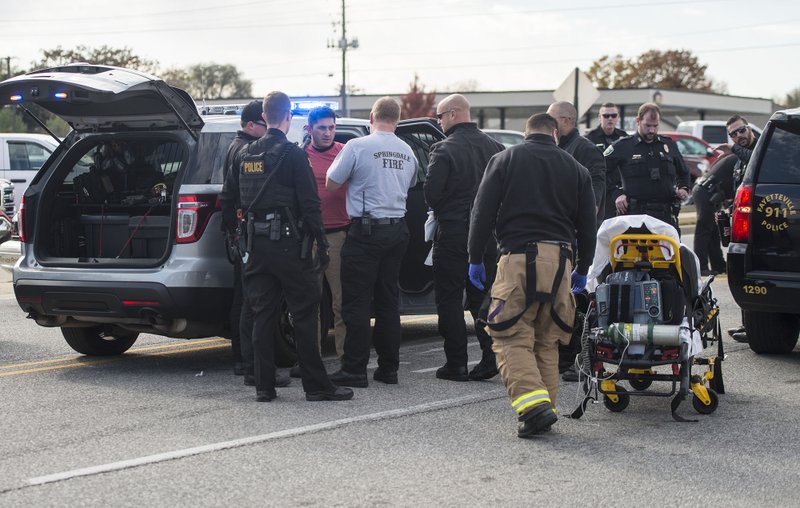 NWA Democrat-Gazette/BEN GOFF Medics from the Springdale Fire Department treat a man wearing handcuffs Sunday, Nov. 11, 2018, at the scene of a shooting on Don Tyson Parkway near the intersection with South Thompson Street in Springdale.

SPRINGDALE -- A man accused of shooting at police officers during a car chase Sunday is being held in lieu of $500,000 bond.

Luis Cobos-Cenobio, 29, of 1337 Shannon St. faces four charges of attempted capital murder and one charge each of fleeing, terroristic act, possession of a controlled substance and possession of drug paraphernalia.

U.S. Immigration and Customs Enforcement placed a hold on Cobos-Cenobio. Calls to the immigration office in Fort Smith were not answered Monday.

He shot at law enforcement officers during a car chase that started in Tontitown and ended in Springdale, according to a news release from the Police Department. No officers were injured, but they did return fire.

Cobos-Cenobio had an injury to his shoulder when he was arrested at the intersection of South Thompson Street and Don Tyson Parkway, according to the news release.

Arkansas State Police will investigate the officer-involved shooting, spokesman Bill Sadler said Monday. When the investigation is complete, the state police will turn the case over to the Washington County prosecutor's office to determine if the use of force by local law enforcement was consistent with Arkansas law.

Two police officers were placed on administrative leave pending the investigation, as is standard protocol in these incidents, according to the release.

The incident started at 12:43 p.m. after Washington County Cpl. Brett Thompson attempted to pull over a green Saturn driving north on South Barrington Road near Steele Road in Tontitown for a traffic violation, according to a Washington County sheriff's office news release. The area is south of U.S. 412 and west of Interstate 49.

Cobos-Cenobio eventually stopped the car on Steele Road. When Thompson got out of his patrol vehicle, Cobos-Cenobio opened his car door and began shooting, at which point Thompson returned fire, according to a news release from the sheriff's office.

Cobos-Cenobio fled, then stopped a short distance later and let a female passenger out of the car before taking off again.

A Springdale police officer spotted the car at 1:11 p.m. north of Lake Fayetteville. Cobos-Cenobio again shot at officers, according to the Springdale release.

The Fayetteville Police Department and Arkansas State Police joined the chase that went into Fayetteville and back to Springdale. Cobos-Cenobio stopped the car and surrendered to police.

He was treated at Northwest Medical Center and taken to the Washington County jail.