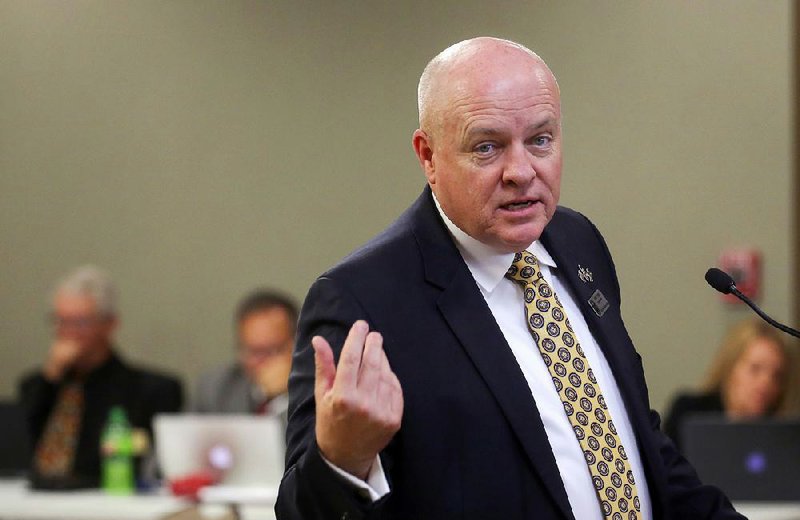 Negotiators for the Little Rock School District and the Little Rock Education Association on Tuesday reached a contract settlement that was quickly finalized by Arkansas Education Commissioner Johnny Key and the employee union members.

The 12-page agreement was announced just before 6:30 p.m. by Key, who acts in place of a school board in the state-controlled Little Rock district, which does not have a locally elected board.

The agreement was then unanimously ratified by about 200 association members who met at First United Methodist Church, association President Teresa Knapp Gordon said.

"This agreement is a win for students," Key said in the Tuesday evening news release.

Key on Oct. 22 had rejected an earlier tentative agreement between the district and its employees union because he wanted support for a request to the state board for the waiver of employment protection laws in 22 district schools recently given state ratings of Ds and Fs.

He said at the time that academic progress at the schools was not satisfactory and that the process for removing incompetent teachers was too cumbersome. He also noted that state law allows the waiver of the Teacher Fair Dismissal Act in districts that are classified in the state's school accountability system as "Level 5-Intensive Support," which is the case for Little Rock.

"A waiver from the Teacher Fair Dismissal Act gives the Little Rock School District the flexibility it needs to expedite critical staffing decisions," Key said in the prepared statement, "especially in areas where student learning is directly impacted."

Only the state Board of Education can approve a waiver of the state law. That request for the district that has 3,581 employees -- including 1,917 employees on the teacher payroll -- could go to the state board as soon as its Dec. 13 meeting.

"The agreement also meets my commitment to providing due process for staff, and it strengthens the district's utilization of the Arkansas Teacher Excellence and Support System to drive instructional improvement," Key said, referring to the state and district's already existing teacher evaluation and improvement program.

Gordon said later Tuesday night that the language of the new agreement regarding the pursuit of a possible waiver of the employment protection laws doesn't mean the union supports a waiver.

"It just means that we recognize that [Key] could do it regardless of whether it's in the contract or not," she said, "because it is the state law and the [Professional Negotiated Agreement] doesn't trump state law."

Gordon said she hopes the Education Board will be "really thoughtful" in its consideration of a proposed waiver of the employment protections.

"As a professional I think waivers are dangerous," she said. "Those state laws and standards of accreditation are there to ensure a quality education and they should not be easily waived. I think it is damaging to our children when things are waived that are provided to assure there is a quality education."

Association members at the ratification meeting were initially tense and a little suspicious of the agreement "but at the end there was relief," Gordon said.

"Nobody wanted to take action during the holidays or be out in the cold," she continued.

The newly approved agreement includes a new due-process clause and it enables the union to continue to be the exclusive bargaining agent for non-administrative employees in the district, including teachers, counselors, library/media specialists and support staff who are not state-licensed educators.

"We have a contract that allows us to represent our employees in whatever comes up," Gordon said. "If it is disciplinary, or if its contract negotiations or if a joint committee needs to be formed to talk about professional development or anything else -- we're at the table. It's important that our voices be heard and that we're part of discussions because we are the professionals."

The settlement occurred one day before the existing contract, or professional negotiated agreement, was to expire at midnight tonight.

The term of the new agreement is Nov. 1, 2018 to Oct. 31, 2019. The language in the agreement states that the "LRSD shall continue its recognition of the LREA throughout the term of this agreement and during negotiations for a successor agreement as long as it is deemed by the Board of Education to be in the best interest of the employees and the district."

The language is a combination of language sought by Key and by the association.

Regarding the employment laws, there is language under the "Board Authority" portion of the agreement that says: "Nothing in this agreement shall limit LRSD's statutory right to petition the state Board of Education for waivers pursuant to Arkansas Code Annotated 6-15-103 or for the state Board of Education to take any action that may be permitted by A.C.A. 6-15-2916, including but not limited to a waiver of the [employment laws]. ... If the Arkansas Teacher Fair Dismissal Act and the Public School Employee Fair Hearing Act are waived, then the grievance policy provisions on non-renewals, terminations, and suspensions without pay shall go into immediate effect."

The contract language does not limit the proposed waiver request to just the district's 22 schools that have the D and F letter grades that Key has focused on. The district currently has 40 operating schools.

Under the Grievance Procedure section of the contract there is new language that states that grievances can be raised by an employee who has been recommended for nonrenewal of contract, termination or suspension. Those grievances will begin at level three of the grievance procedure, which is a hearing before the school board.

However the employee shall have the right to a meeting with the superintendent or the appropriate deputy superintendent prior to that Level 3 hearing.

Key said earlier in calling for waiver-related language in the contract that the Teacher Fair Dismissal Act process of removing a poorly performing employee can take as long as two years to follow all the required steps. Principals had reported to him that there were situations where they needed to make some staff moves but were hamstrung by the process.

He said it was not his intention that staffing changes be made in the midst of the current school year but in preparation for the following year.

He also said previously that the proposed waiver is not an attempt to bash teachers, that it would be used as a scalpel and not a chain saw. He also noted that the waiver might not apply just to classroom teachers but also to principals.

One of the new provisions in the agreement focuses on the Teacher Excellence Support System, known as TESS, that is used for supporting and developing effective teachers.

"TESS also is a tool that can be used to impact decisions on employees," the agreement says. "This system is designed to provide clear expectations on performance, provide guidelines with communication and time lines, utilize mentors, and create a transparent approach that is consistent for all teachers."

Other parts of the agreement are virtually unchanged from past years. Those include sections on sick and personal leave, salaries, benefits, and the overall grievance procedure.

The agreement is signed by Key, Gordon and Superintendent Mike Poore. Poore did not immediately return a message left Tuesday evening on his cellphone. 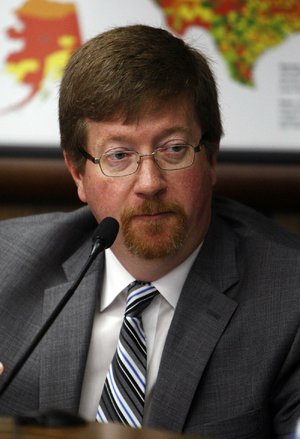 Photo by Jeff Mitchell
Johnny Key is shown in this file photo.