Measure of a kilo in for a change

Formulation to take place of hunk of metal in French vault by JOHN LEICESTER THE ASSOCIATED PRESS | November 14, 2018 at 2:08 a.m. 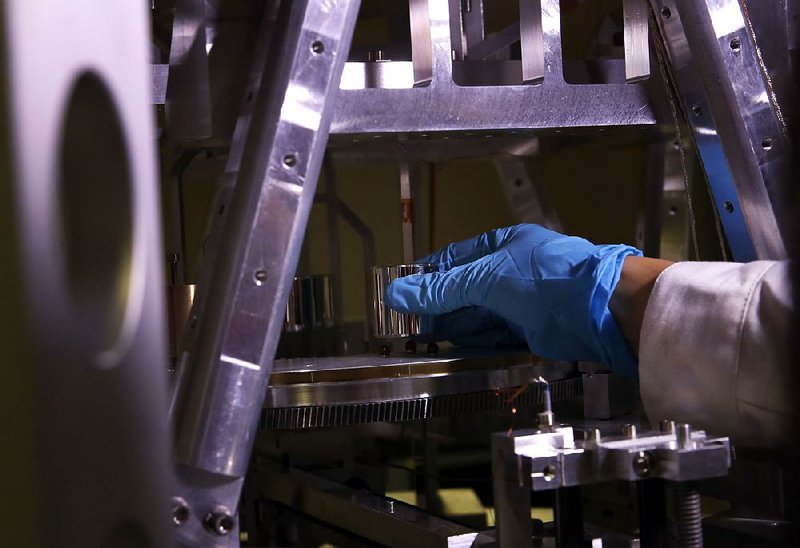 Dr. Hao Fang of the International Bureau of Weights and Measures in Sevres, France, sets up the so-called Grand K, the golf ballsized metal cylinder used as the worldwide standard for the mass of a kilogram. The physical prototype is expected to be replaced Friday by a scientific formula to define the exact weight of a kilo.

SEVRES, France -- The way scientists define the exact mass of a kilogram is about to change.

Until now, its mass has been defined by the granddaddy of all kilos: a golf ball-size metal cylinder locked in a vault in France. For more than a century, it has been the one true kilogram upon which all others were based.

Gathering in Versailles, west of Paris, governments are expected on Friday to approve plans to instead use a scientific formulation to define the exact mass of a kilo. The change is expected to have practical applications in industries and sciences that require ultra-precise measurements of mass.

And it will mean redundancy for the so-called Grand K, the kilo that has towered above them all since 1889.

Made of a corrosion-resistant alloy of 90 percent platinum and 10 percent iridium, the international prototype kilo has rarely seen the light of day. Yet its role has been crucial, as the foundation for the globally accepted system for measuring mass upon which things like international trade depend.

Three keys, kept in separate locations, are required to unlock the vault where the Grand K and six official copies -- collectively known as "the heir and the spares" -- are entombed together under glass bell-jars at the International Bureau of Weights and Measures, in Sevres on the western outskirts of Paris.

Founded by 17 nations in 1875, the bureau is the guardian of the seven main units humanity uses to measure its world: the meter for length, the kilogram for mass, the second for time, the ampere for electric current, the kelvin for temperature, the mole for the amount of a substance and the candela for luminous intensity.

Of the seven, the kilo is the last still based on a physical artifact, the Grand K. The meter, for example, used to be a meter-long metal bar but is now defined as the length that light travels in a vacuum in 1/299,792,458th of a second.

"This, if you like, is a moment of celebration because it's like the last standard remaining from 1875 that will finally be replaced by new innovation," said Martin Milton, director of the weights and measures bureau. "Everything else has been recycled and replaced and improved. This is the last improvement that dates back to the original conception in 1875. So that's a tribute to what was done in 1875, that it's lasted this long."

Only exceedingly rarely, and exceedingly carefully, have the bureau's master kilos been gingerly taken out so that other kilos sent back to Sevres from around the world could be compared against them, to be sure they were still properly calibrated, give or take the mass of a dust particle or two.

Although many Americans commonly think of weight in pounds and ounces, the United States is officially a kilo country, too: It was one of the original 17 founders of the weights and measures bureau in 1875. The United States' primary kilo is called K20 and was assigned to the country in 1889 by the bureau, along with another, K4. One kilo is equivalent to 2.2 pounds.

The U.S. also has six other platinum-iridium kilos: K79, 85, 92, 102, 104 and 105. They are all looked after by the National Institute of Standards and Technology, a branch of the Commerce Department.

To verify their mass, K20 and other kilos from around three dozen other countries were measured in Sevres against the master kilos in a painstaking calibration exercise from 1988 to 1992. K20 was most recently then measured again at the weights and measures bureau in 2014.

Even as humans argued, fought and slaughtered one another by the tens of millions in the 20th century, they shared the kilo. The kilo allocated to China in 1983, as it started to embrace market changes that subsequently turned it into an economic behemoth, was the first manufactured with ultra-high precision diamond machining. Allocated to Japan in 1894, K39 was later ceded to South Korea in 1958.

The kilo is "a tribute to man's ability to collaborate," Milton said. "It's been called a great work of peace, actually, because it's one of the areas where all of the states of the world come together with absolutely the same objective."

The metal kilo is being replaced by a definition based on Planck's constant, which is part of one of the most celebrated equations in physics but also devilishly difficult to explain. Suffice to say that the update should, in time, spare nations the need to occasionally send their kilos back to Sevres for calibration against the Grand K. Scientists instead should be able to accurately calculate an exact kilo, without having to measure one precious lump of metal against another.

Milton said the change will have applications in computing, manufacturing, pharmaceuticals, the study of climate change and other sciences where precise measurements are required.

"The system will be intrinsically correct by reference to the laws of science, the laws of nature," he said. "We won't have to depend on just assuming that one particular object never changes."

Print Headline: Measure of a kilo in for a change