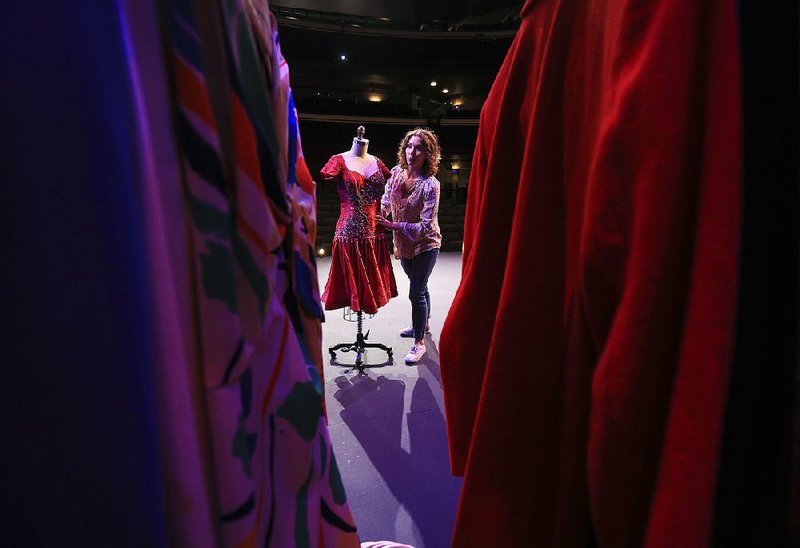 Anna Kimmell, director of education at The Arkansas Repertory Theatre, moves props into place Tuesday afternoon on the stage in preparation for an event to announce details of an abbreviated season of plays and musicals. ( Arkansas Democrat-Gazette / Staton Breidenthal)

The Arkansas Repertory Theatre on Tuesday announced it will offer a four-show season to spearhead its attempt to return from the brink of nonexistence.

Board Chairman Ruth Shepherd and interim General Manager Bill Rector unveiled the 2019 Mainstage lineup at a "special reveal party" Tuesday at the theater, at Sixth and Main streets in Little Rock, the pivot point of the city's downtown "creative corridor."

The season will open Feb. 19-March 24 with the Kander and Ebb musical Chicago.

The season in general and Chicago in particular reflected the work of Repertory Theatre founder Cliff Baker, who died Sept. 6 in New York just a week shy of his 71st birthday.

Baker had stepped back into the spotlight as interim artistic adviser and was part of the troika, with Shepherd and Rector, that was the Rep's public face as the nonprofit theater tried to get back on its fiscal and artistic feet. The board had declared April 24 that it was suspending operations, canceling the final production of the 2017-18 season and the entire 2018-19 season because of critical cash-flow problems.

"Cliff's fingerprints were all over this season," Shepherd said, noting that Baker had been trying to get the rights to Chicago for at least a decade but had been stymied because of Broadway revivals and a recently wrapped-up national tour.

Ron Hutchins, whose Rep credits as a director and/or choreographer include 2010's Smokey Joe's Cafe; 2007's Hello, Dolly!; and 2005's Beauty and the Beast, will choreograph and replace Baker as the director. Michael Rice, also a familiar name out of the Rep's past, will be the musical director.

The season will also include:

• April 16-May 5: Native Gardens, a new play by Karen Zacarias that questions whether, in fact, good fences make good neighbors. The laissez-faire gardening style of a young Latin couple (a lawyer for a big firm and his pregnant wife) brings them afoul of their white neighbors, whose garden is carefully manicured.

• Sept. 3-Oct. 6: Million Dollar Quartet, which was originally scheduled to close out the 2018-19 lineup that previous artistic director John Miller-Stephany had presented in February. The show, which has been through Little Rock on tour, focuses on the Dec. 4, 1956, Sun Records recording session that brought Elvis Presley, Johnny Cash, Jerry Lee Lewis and Carl Perkins together with producer Sam Philips. Hunter Foster, who originated the role of Philips on Broadway, will direct.

• Dec. 3-22: A radio-play version of It's a Wonderful Life, based on the 1946 film classic that starred Jimmy Stewart.

The Rep stage will also host:

• Opera in the Rock's previously announced production of Giacomo Puccini's opera Madama Butterfly, May 17-19, with members of the Arkansas Symphony Orchestra in the pit.

• The Saints & Sinners fundraiser, either Oct. 19 or Nov. 2. The annual gala has been a huge moneymaker for the Rep, Shepherd said, outdrawing all but one stage production over the past two years.

Shepherd said the Rep will continue to operate under an agreement with Actors Equity, the theatrical union, that will maintain its certification as a professional theater. On that basis, the theater will hold season auditions Dec. 3 and 5 in conjunction with the Conway-based Arkansas Shakespeare Theatre, also an Equity company, and will hold auditions specifically for Chicago on Dec. 8.

The board has also made a renewed dedication to raising the money it will take to keep the theater operating through and beyond 2019, changing the emphasis of its campaign from "Save the Rep" to "Rebuild the Rep." Since April, the theater has raised more than $800,000 in gifts and pledges, doubled through matching grants from the John & Robyn Horn Foundation and the Windgate Charitable Foundation.

Shepherd said the board is still working to raise an additional $1.2 million as part of its ongoing Our Next Act campaign, which would allow the theater to establish operating and facilities reserve funds while retiring its remaining property debt. It will also go toward sustaining the Cliff Fannin Baker Artistic Director's fund, established at the request of Baker's husband, Guy Couch, geared toward hiring top artistic directors as guest artists and supporting the new work and "bold choices in programming."