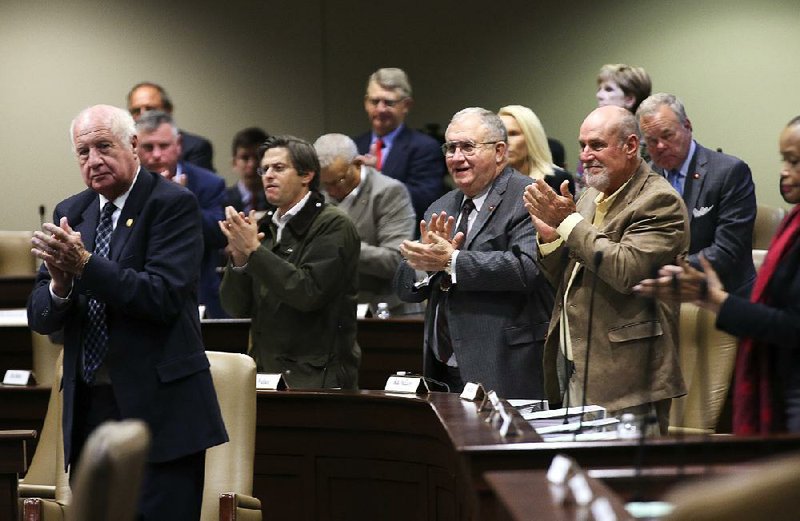 Gov. Asa Hutchinson on Wednesday proposed a state general-revenue budget for next fiscal year that is $125.2 million more than this year's budget, with most of the increase going to human services and education programs, including a boost in starting teacher pay.

The proposed budget of $5.75 billion is for fiscal 2020, starting July 1. The Legislature will decide on a budget in the regular session starting Jan. 14.

The proposal factors in a $47.4 million reduction in revenue from the Republican governor's proposal to gradually reduce individual income taxes. He wants to phase in reducing the top individual tax rate from 6.9 percent to 5.9 percent and reduce the number of tax tables from three to one.

During a joint meeting of the Legislative Council and Joint Budget Committee, Hutchinson said his proposal "meets our state obligations, funds necessary services, increases teacher pay, meets the needs of public safety and continues to reform our tax code."

The governor also discussed a proposed fiscal 2021 general-revenue budget. He proposes a $128 million increase to $5.87 billion. The proposal factors in a $111 million reduction in revenue from implementing the tax cut plan. Fiscal 2021 starts July 1, 2020, and the Legislature will vote on that budget during its 2020 fiscal session.

In a letter to the Legislative Council, Hutchinson said that federal tax conformity and adding magazine subscriptions to the sales-tax base will raise $30.3 million in both fiscal years and offset part of the impact from his tax-cut plan.

The general-revenue forecast for the next two fiscal years includes the expected increase in revenue from Internet sales-tax collections. Hutchinson anticipates legislative approval of a law taking advantage of a U.S. Supreme Court ruling upholding a South Dakota law on taxing Internet sales, the governor said.

John Shelnutt, the state's chief economic forecaster, told lawmakers that about $20 million a year in increased Internet sales tax collections is factored into the governor's budget.

"This sets us on a path of reducing our [top] rate in Arkansas for individual taxpayers to 5.9 percent in four years. This is historic and will increase the attractiveness of Arkansas as a destination, as a place to invest, to build and locate," Hutchinson said. 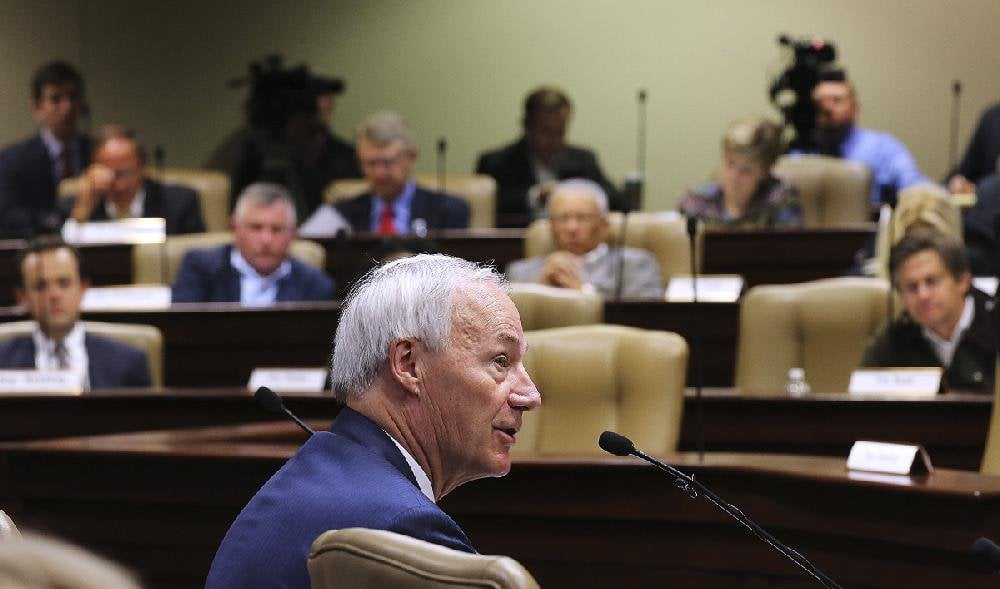 The plan also would increase rates for some taxpayers and increase the standard deductions for married and single taxpayers to offset any increased taxes, according to state officials. They've projected the plan would eventually reduce revenue by nearly $192 million a year.

In 2015 and 2017, the Legislature approved Hutchinson's plans to reduce rates for people with taxable income up to $75,000 a year. The first two plans are projected to collectively reduce revenue by about $150 million a year.

Legislative leaders had a mixed reaction to the governor's proposal.

"I would have liked to see in the first year $25 million or $30 million in cuts in state government to help fund [more tax cuts]," said Jean, who also is a co-chairman of the Joint Budget Committee.

"I really don't think all the details have been worked out yet on both spending and tax cuts. But it's a starting point," he said in an interview.

Senate Democratic leader Keith Ingram of West Memphis said he wants to take a closer look at the proposed budget and tax cut.

The proposed raise for starting teacher pay "is very positive and I probably would like to give more," he said in an interview. "I have some concerns about pre-K, [increased special education] catastrophic funding that is not in there. Our senior citizens are struggling. There is a number of needs."

Afterward, Hutchinson told reporters, "I think the battle will be in whether we accelerate tax cuts, we try to accommodate more tax cuts in there.

"I think there will be some debate on whether we need to fund other items that are not as robust as some of the legislators would like. Do we have 30 new parole officers or do we have 40?" He's proposed 30.

The governor said he's committed to raising the starting teacher salary from the current $31,800 to $36,000 a year over the next four years. The final estimated cost is $60 million a year.

Hutchinson said he is asking lawmakers to transfer $60 million from the educational adequacy fund to the public school fund for implementing teacher salary increases. He said about 174 school districts in Arkansas "are below what we would anticipate moving the minimum district salary to $36,000."

He said his proposed budget also would provide more funding for school district matching funds to the Arkansas Teacher Retirement System and "assures teachers that we are committed to a healthy teacher retirement system.

"I am convinced that as you look at education that quality teachers make all the difference and that's why this budget funds teacher salary increases. It funds your [educational] adequacy recommendations and continues with robust funding of our computer science initiative," Hutchinson said.

The House and Senate education committees have disagreed about how much in state funds should be allocated to the special-education catastrophic fund, which is available to school districts to use for students' individualized education plans.

"We hope that there will be, as happened two years ago, at some point, a coming together of the two sides on this issue, but we felt the best course of action was to go with the flat request and, if any adjustments are made to the adequacy committee report through the session, we'll be prepared to make adjustments to that," said Johnny Key, the state's education commissioner. The adequacy committee looks at school funding needs. 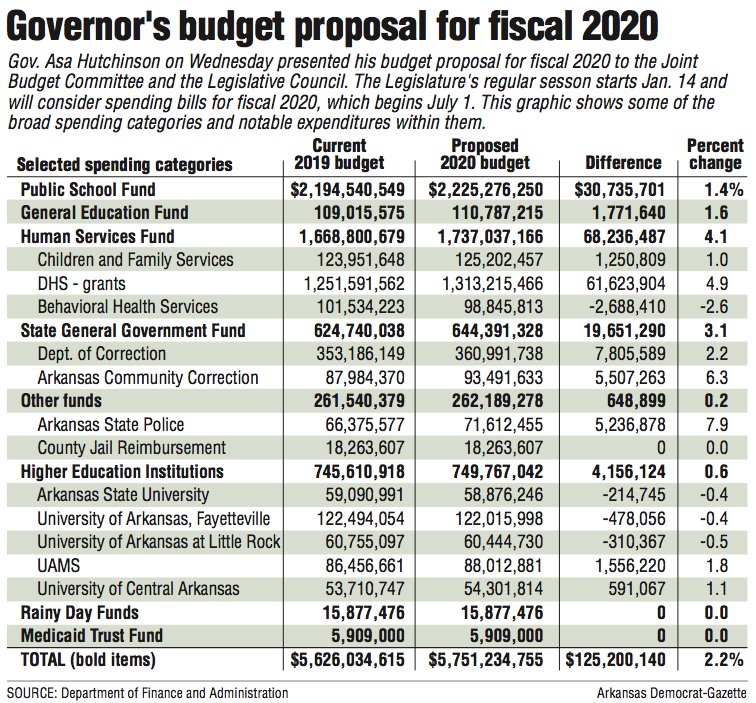 Afterward, Hutchinson said his proposed budget includes the funding to meet the higher match that is required by federal law for the Medicaid expansion.

The state is paying 6 percent of the cost of the Medicaid expansion program that provides health insurance coverage for about 250,000 low-income Arkansans. The program is called Arkansas Works under Hutchinson. The state's share will be 7 percent next year and increase to 10 percent in 2020 under existing federal law.

The governor's proposed budget also includes $2.5 million a year for the state's four crisis stabilization units that are designed as a temporary place to send people with mental health emergencies and divert them from jails.

Hutchinson proposes increased general revenue funding of the state's colleges and universities by $4.1 million to $749.7 million in fiscal 2020.

"The productivity funding formula that you adopted has once again been funded, but there are increases in our non-formula institutions that have been flat funded for a number of years and there has been concern expressed that we are simply using one-time funds to bolster some of our non-formula institutions like the Division of Agriculture and UAMS," Hutchinson told lawmakers.

Hutchinson's proposed budget includes $16 million for performance-based pay for state employees and increased funding for 24 new Arkansas State Police troopers over the next two years. It also has an annual new trooper school to maintain trooper strength, he said.

Hutchinson said his proposed fiscal 2021 budget, further down the road, includes $7.5 million in savings from his reorganization plan. He will ask lawmakers to reduce the number of state agencies reporting to him from 42 to 15.

Voter approval of Issue 4 to authorize the state to issue four casino licenses has led to a projection of a $38 million reduction in tax revenue in fiscal 2020. That "results not in a reduction in services, but simply a reduction [of what] we are able to put into savings or other reserves," he said.

But Ingram proposed betting state Department of Finance and Department Director Larry Walther that the $38 million budget "hole" projected in fiscal 2020 probably will be roughly half of that "because there has been assumptions that have been made or haven't made." He represents the West Memphis area, where Southland Gaming & Racing, which favored the amendment, can expand into a full-fledged casino.