The world's a stage 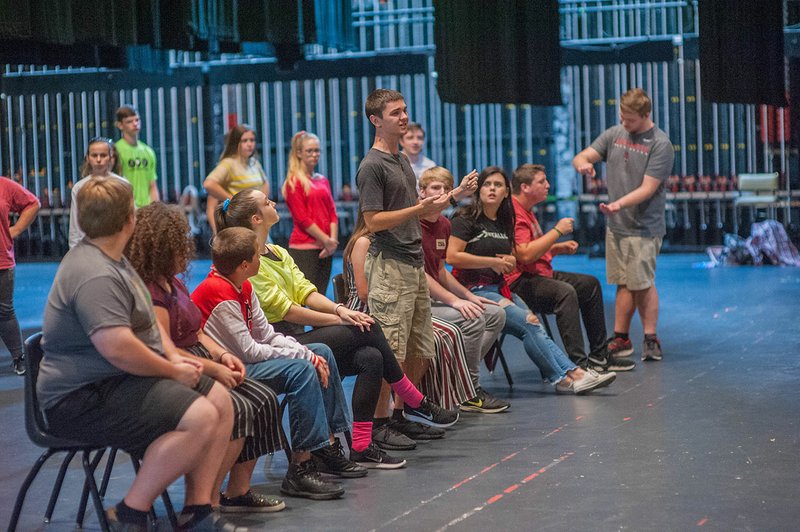 Driving through the sleepy town of Alma on the way to the high school, you'll pass a newer, modern Boys and Girls Club building and a pretty fancy Aquatic Center that's on par with the kind of facilities you might expect to find in a city three times the size.

It's clear that this is a town that takes its amenities for children and teens seriously.

Coming to the Alma PAC

And when you reach the Alma Performing Center, you realize: There's something a little bit magical going on in Alma. The enormous brick building stands on the Alma High School campus, a majestic statue of an Airedale Terrier, the school's mascot, posed proudly in front of the entrance.

It might be difficult to imagine why a town of 5,800 people would build a performing arts center with a seating capacity of 1,500 and what might be the largest stage in the state. But once you start nosing around a little bit about the impact the center has had on the town, it starts to make a little more sense.

The exposure it has given the students of the district to the performing arts is remarkable. From kindergarten through high school, every student will see at least one professional show a year. A whopping 80 percent of Alma School District students have some direct involvement in the performing arts, giving them the opportunity to perform on a professional-grade stage. The district's dance program boasts 350 participants, one of the largest in the state. This enthusiastic participation means that all of the high school's arts programs feature a wide cross-section of the school's population, helping to lessen the issues with social hierarchy and segregation that high schools traditionally experience.

"Anybody can try out," says the PAC's executive director, Teresa Schlabach. "So you have band kids, choir kids, football players, cheerleaders, dancers -- they all come together for this project, and then they kind of figure out that everyone is kind of cool. 'I might not have been your friend, but you're kind of cool, I like you.'"

When the Center opened in 2002, it marked the first time that the community had a performing arts venue since a fire had burned down part of the elementary school in 1962.

"It burned down the only cafetorium, along with the theater department, the costumes, everything," says Schlabach. "Long story short, the school was under-insured. Because it also burned down classrooms and other things, they built back what they had to have, and they never rebuilt the theater."

For the next four decades, says Schlabach, the Alma School District made do.

"When my kids were in school, if you were in seventh grade band, you would have your concert at the gym in the middle school, and then they would say, 'OK, everyone needs to move now, we need to make room for the eighth grade, they need room for parking,' et cetera."

And music programs were the only performing arts outlet -- there was no theater or dance program in the intervening years. The school district built quite an impressive athletic department but, says Schlabach, administrators and teachers in the district were aware that sports weren't for everyone. It was important to them that all kids have an extracurricular outlet that inspired them.

"There is no activity that is the right thing for every student," says Alma School District superintendent David Wooly. Wooly first came to the school district as the high school band director in 1972. As a performing arts instructor, he says, he had been imagining a performing arts venue as grand as the Alma PAC for much of his career. "We can't all be basketball players, and we don't all want to be. So our job is to have every kind of high school program that we can have, so every student can find their niche that they're passionate about -- so they can spend time getting good at it, so they can understand what it's all about and so that they can develop the kind of work ethic it [takes] to be really good at what they love."

The Alma School District philosophy, says Wooly, is that arts education is something that goes far beyond mere entertainment; they see it as a way to educate the whole child.

"This goes back to a deeply held belief of mine and everyone else here. Yes, academics are very important. There's no question that a large part of a school district's responsibility is to give the student the academic knowledge to succeed in college and the work place. But one place where some schools fall short is the other side of the coin -- what to do with that knowledge. If a person does not have a good work ethic, time management skills, teamwork skills, it doesn't matter how much knowledge they have, academically." Those skills -- sometimes called "soft skills" -- are often taught through participation in extracurricular activities. "Our mantra is, 'Preparing a student to be a successful adult.' If you don't know how to work or to be a part of a team or how to get a job done on time, you're not going to be successful."

"I believe that theater is an amazing vehicle that encourages students to not only get involved, but to become a better version of themselves," says drama teacher David Hobson. "It builds their sense of self-worth while giving them greater confidence that they can do anything they work toward. Students [who have participated in theater] have shown improved attendance, they're engaged in these classes, and they are taking more Advanced Placement classes."

Because the Alma PAC was built to the specifications of a professional performing arts center, performing is just one part of the experience for students. The PAC has a full scene shop, where sets are designed and built under the supervision of technical director Steven Sellers, and a costume shop that boasts a robust collection of handmade costumes.

"We have around 20 of these wedding dresses," says Schlabach during a recent tour of the costume shop. "We teach students how to repurpose them -- use the lace on them, cut the beads off. How to rebuild them, use the different fabrics."

Professional touring companies also come to the Alma PAC to mount their shows, which means that Alma High School students get the opportunity to work on professional productions.

This fall, the national tour of "The Wizard of Oz" moved into the PAC for a week as they worked new cast members into the show.

"This particular company, we've worked with for 10 years," says Schlabach. "They're very family oriented, so they're great to let our kids shadow them. [The kids] come after school and see how this is actually working -- especially with 'Wizard,' because they've added all of this videography, which is the newest thing on Broadway. We had about 10 engineers here, and it was a great experience for the kids to see this isn't just throwing up a film. This is three projectors, and we have to time it right. Then we've got to have a scrim down with something spinning behind it, and we have to reset Munchkinland, all while the video is going on. So there's a lot of math involved, a lot of science and a lot of technology. It actually meets STEM curriculum, but the kids don't really know they're learning that way."

Exposure to professional entertainment is another advantage of the PAC and benefits the greater community, as well as the students.

"Our goal is that every student in school will have the opportunity to watch at least one, if not two, professional shows each year," says Wooly. "Our kids will grow up understanding what high quality arts is all about, because they see it starting in kindergarten. At least one time a year, we bring in a show that has a direct curriculum tie-in."

When Schlabach started working with the PAC back in 2002, the goals were modest: The aim was to bring in around two touring shows a year.

The seasons have continued to grow -- this year, 10 performances will be presented on stage -- and Schlabach says figuring out how to program that season has been a learning process.

"The first mistake I made was seven shows in 14 days," she says with a laugh. "I would never advise anyone to do that. I slept here. That was just stupid. But you have to learn who your audience is, what they're looking for, what is the target age. It's a learning curve."

Schlabach has taken chances over the years, most of which have paid off.

"We did a show called 'Broadway on Ice'," she says. "It was a national tour with [Olympic medalist] Dorothy Hamill and Frank D'Ambrosio, who was one of the original Phantoms in 'Phantom of the Opera'. We laid an ice rink on our stage -- that was a novelty."

Her programming picks have been successful enough to move toward her No. 1 goal, the same goal as the supporting foundation that was established soon after the PAC opened.

"My goal is to have a million dollar endowment, and we're more than halfway there," she says. "This is a great way to raise money for kids' scholarships." Since inception, the PAC's foundation has distributed nearly $1 million in scholarship money to graduating seniors. Schlabach says the scholarships are for training and technical programs in addition to college. "I have kids that want to stay at home and take over the family farm, and I'm all about that. I think that's great. But I want them to go to school and become an even greater farmer. Or, if you want to be a plumber, gosh, let me help you out. I need plumbers. I need people to do my hair. We need those things."

From his front-row seat in the drama classroom, Hobson says he gets daily evidence that a performing arts education adds value to a traditional education.

"Through our students' hard work and countless number of hours spent in rehearsal, they build trust in themselves and in the community around them," says Hobson. "I love theater because it welcomes everyone and because it provides the students a safe place where they feel like they are needed and belong. One of my favorite stories is about a young man who had a speech impediment that he dealt with on a daily basis. He was a great student who desperately wanted to be on stage and deserved the opportunity. After weeks of rehearsal, when the first performance came around, all of his teachers, his family and fellow students were amazed that when up on stage he never stuttered once.

"Theater provides amazing opportunities for students, and that is why so many students stay involved in some way."

"I guess the thing I can't emphasize too strongly is that arts is the vehicle," concludes Wooly. "It's not the end all, be all. We do it for what the process does for the students as they become successful adults." 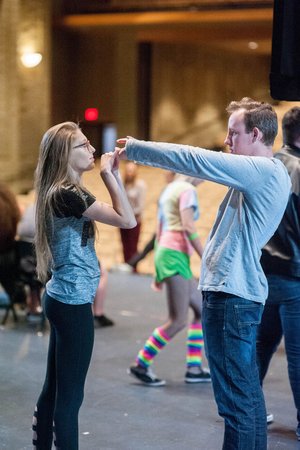 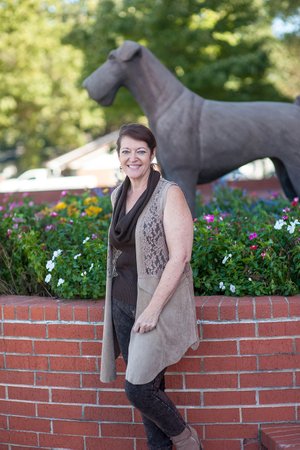 NWA Democrat-Gazette / Lara Jo Hightower Teresa Schlabach has been the executive director of the Alma Performing Arts Center since it opened its doors in 2002. 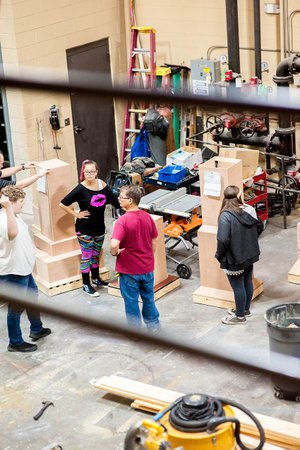 Print Headline: The world's a stage