Arkansas' unemployment rate was unchanged at 3.5 percent between September and October, the lowest in the state's recorded history, the U.S. Bureau of Labor Statistics said Friday.

The national unemployment rate was 3.7 percent.

There was little to cheer about in the monthly report, said Michael Pakko, chief economist at the Arkansas Economic Development Institute at the University of Arkansas at Little Rock.

The state's jobless rate is fine, but changes in the statistics underlying the rate were not altogether positive, Pakko said.

"The bottom line is that it is just one month's report after all," Pakko said. "While there are no gems of good news in here, the overall trends remain the same. We've got low unemployment and growing payroll employment, even if it's slowing down a little bit." 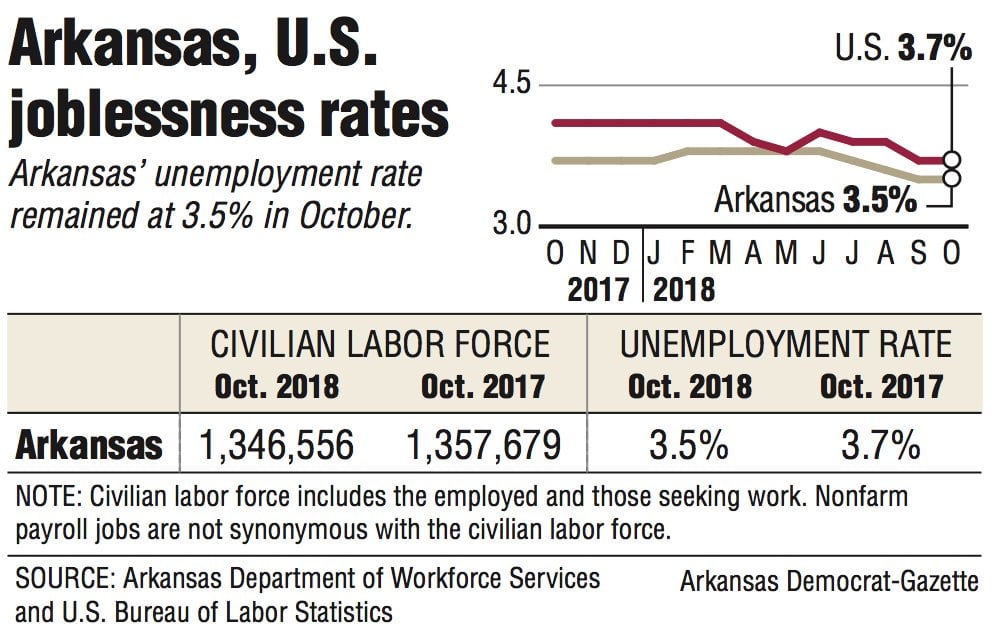 Graphs and information about the Arkansas and U.S. joblessness rates.

The labor-force participation rate, which was declining by 0.1 percent every month of the year, was unchanged in October, said Mervin Jebaraj, director of the Center for Business and Economic Research at the University of Arkansas, Fayetteville.

The labor-force participation rate, which is calculated by dividing the labor force by the population of workers over the age of 16, was 57.4 percent in October.

Most states have a participation rate of more than 60 percent.

"The rest of the state continues to lose jobs," Jebaraj said. "It continues to concern me in terms that our job growth is not broad-based."

From October 2017 to October this year, jobs rose in five industry sectors, declined in five sectors and were unchanged in one sector.

The biggest gain in jobs was in the professional and business services sector, which added 5,500 jobs.

There were 2,200 more manufacturing jobs in the past year.

Arkansas added 1,100 construction jobs from October 2017 to last month. The increase was from construction projects across the state, the Arkansas Department of Workforce Services said.

Arkansas was one of 44 states that added construction jobs in the past year, the Associated General Contractors of America said.

"As contractors pay more for labor and most of the materials they use to build, construction costs will climb, potentially dampening future demand for their services," Simonson said.

The growth in professional and business services employment suggests the sector is likely to surpass manufacturing as the fourth largest sector in the state, perhaps as early as 2020, said Greg Kaza, executive director of the Arkansas Policy Foundation in Little Rock.

Arkansas' professional and business services employment has expanded from 111,800 to 150,600 since the recession ended in June 2009, while manufacturing has contracted from 161,700 to 160,100, Kaza said, citing the Bureau of Labor Statistics' data.

The sector with the biggest loss was leisure and hospitality, which lost 1,600 jobs last month.

The number of government jobs was unchanged in October.

Hawaii had the lowest unemployment rate in October at 2.3 percent; followed by Iowa at 2.4 percent; New Hampshire at 2.6 percent; Idaho at 2.7 percent; and four states at 2.8 percent -- Minnesota, Nebraska, North Dakota and Vermont.

Alaska had the highest rate at 6.4 percent, followed by West Virginia at 5.2 percent, Louisiana at 5 percent, and Arizona and Mississippi at 4.7 percent each.