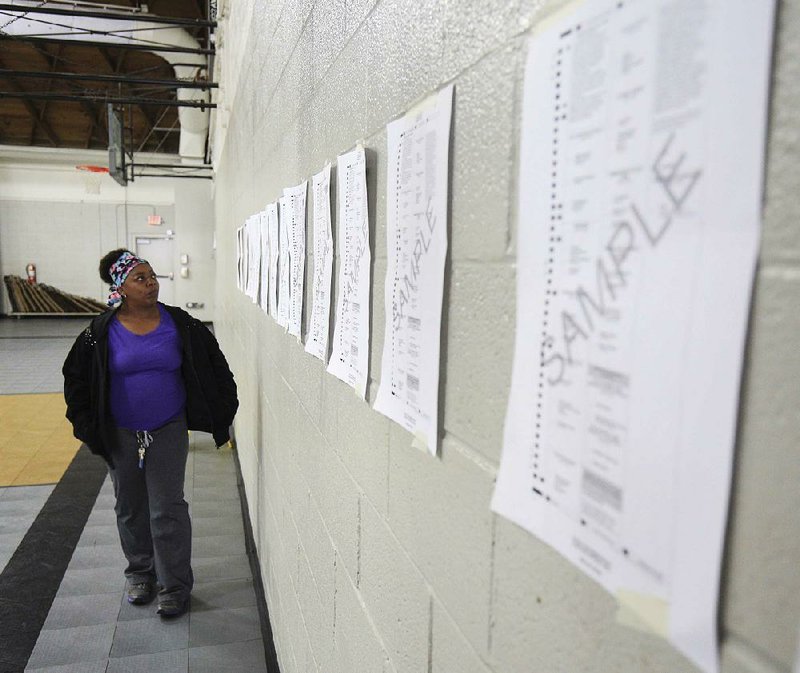 At the Duran Youth Center polling station in Sherwood, workers gave about 250 voters ballots with the race for Ward 1 though those people were not residents of Ward 1. Sherwood council member Ken Keplinger and April Ford Broderick were the candidates for the position.

Keplinger lost to Ford Broderick by 551 votes, according to election results.

A voter notified the county election commission about 1:30 p.m about the problem on Election Day, Poe said. The ballots had been going out since polls opened at 7:30 a.m.

"I mean, we're thankful that that person called in," Poe said.

There is no recourse for the mistake because Arkansas law does not address the situation, said Pat Hays, chairman of the election commission.

"It's probably about the most unfortunate thing I've seen in my time on the commission," Hays said.

Keplinger, who served two terms on the City Council, said he will alert state legislators to the situation but will not take any further action.

"It's just a frustration factor," he said. "I really don't know if I got beat or not."

Commissioner Jason Davis said at an election commission meeting last week that there were similar events in other areas, including voters receiving ballots that did not have all their candidates listed.

The election commission said the poll workers at the Duran Youth Center will not work elections again.

Keplinger would like to see the county move over to electronic ballots, he said.

As the largest county, it's expensive, at approximately $4 million, to replace Pulaski County's voting equipment. The state has been replacing equipment on a county-by-county basis, but this year Poe said he hopes that the Legislature will provide money to update the 23 remaining counties to electronic voting machines.

People had the option to vote provisionally if their voter registrations were in question, Poe said. The commission then decides whether to approve the votes after the election, before certification. There were 298 eligible provisional votes out of more than 1,060 provisional ballots overall.

People whose votes weren't counted in the Election Day tally could protest the decision through the election commission or the county clerk's office.

The commission did not accept 38 of the provisional ballots because the voters did not sign the required affidavit.

Poe estimated that there were between 40 and 50 provisional votes that mistakenly counted in the general election from the two precincts.

"Basically, the election officials did not follow the proper procedures," Poe said.

The commission did not count three absentee ballots because the signatures on the ballots did not match voters' driver's licenses.

The American Civil Liberties Union has sued at least four states this year after they rejected ballots because the signatures did not match. The group contends that signatures can change because of age, disability, disease and poor eyesight, making signature matching an unreliable way to verify votes.

Boyle said the commission was not able to do that when a sheriff's deputy instructed a vehicle to park in the access aisle, which is illegal, at precinct 7980, Henderson United Methodist Church in southwest Little Rock. Boyle, who uses a wheelchair and has long been active in disability rights issues, instructed the deputy that he needed to move the vehicle.

The deputy responded by saying "... he is the sheriff. He tells me what to do. I do not tell him what do," Boyle recounted.

The deputy then took a photo of Boyle's wife's license plate.

The deputy eventually moved the vehicle after Boyle contacted the deputy's superiors.

Boyle said the deputy's actions raise the question "How many times has he done this before?"

Boyle said that actions like these can disenfranchise voters.

Actions on the part of poll workers also can make elections unfair, Keplinger said. He said he thinks that the commission needs to make changes to ensure that mistakes don't happen again. He would encourage increased vetting of poll workers and more training.

But Hays said the commission already struggles to find enough people to man polling stations on Election Day, and Poe said he goes over and over procedures for poll workers in their training.

"As long as humans are involved there's going to be errors, which we hate," Hays said.