Restrictions on migrants blocked by judge by Compiled by Democrat-Gazette staff from wire reports | November 21, 2018 at 4:30 a.m. 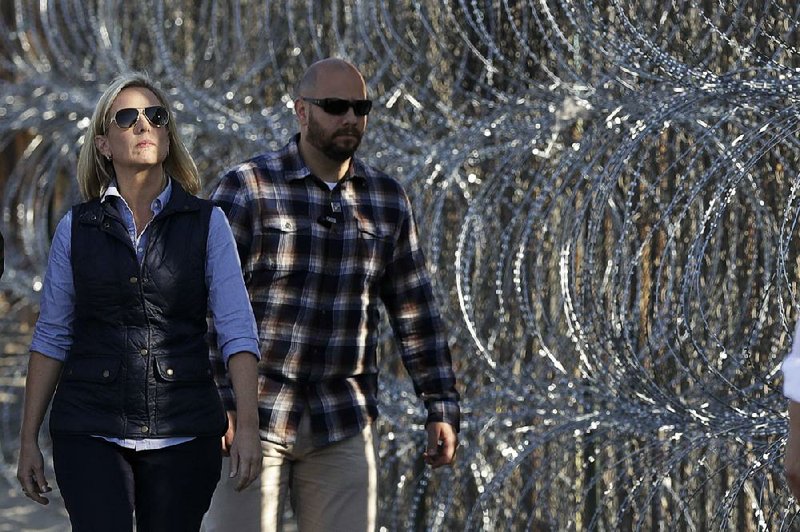 LOS ANGELES -- President Donald Trump's administration on Tuesday was forced to resume processing asylum claims from migrants apprehended at the U.S.-Mexico border, dealing at least a temporary setback to the president's attempt to clamp down on a wave of Central Americans trying to enter the U.S.

Judge Jon Tigar of the U.S. District Court in San Francisco issued a temporary restraining order late Monday that blocks the government from carrying out a new rule that denies protections to people who enter the country illegally.

"Whatever the scope of the president's authority, he may not rewrite the immigration laws to impose a condition that Congress has expressly forbidden," Tigar, a nominee of former President Barack Obama, wrote in his order.

The temporary restraining order against Trump's policy is in place until Dec. 19, when Tigar will hear arguments on whether to issue a permanent injunction prohibiting it.

As a caravan of several thousand people journeyed toward the Southwest border, Trump signed a proclamation Nov. 9 that banned migrants from applying for asylum if they failed to make the request at a legal checkpoint. Only those who entered the country through a port of entry would be eligible, he said, invoking national security powers to protect the integrity of the U.S. borders.

Within days, the administration submitted a rule to the Federal Register, letting it go into effect immediately and without the customary period for public comment.

But the rule overhauled long-standing asylum laws that ensure people fleeing persecution can seek safety in the United States regardless of how they entered the country. Advocacy groups, including the Southern Poverty Law Center and the American Civil Liberties Union, swiftly sued the administration for effectively introducing what they deemed an asylum ban.

After the judge's ruling, Lee Gelernt, the ACLU attorney who argued the case, said, "The court made clear that the administration does not have the power to override Congress and that, absent judicial intervention, real harm will occur."

"This is a critical step in fighting back against President Trump's war on asylum-seekers," Melissa Crow, senior supervising attorney for the Southern Poverty Law Center, one of the other organizations that filed the case, said in a statement. "While the new rule purports to facilitate orderly processing of asylum-seekers at ports of entry, Customs and Border Protection has a long-standing policy and practice of turning back individuals who do exactly what the rule prescribes. These practices are clearly unlawful and cannot stand."

The Center for Constitutional Rights also joined in the suit.

Trump, when asked by reporters about the court ruling Tuesday, criticized the 9th U.S. Circuit Court of Appeals, the liberal-leaning court where the case will likely land, calling it a "disgrace."

He lashed out at Tigar, saying he would file "a major complaint."

"This was an Obama judge and I'll tell you what, it's not going to happen like this anymore," Trump said. "We will win that case in the Supreme Court of the United States."

Administration officials signaled that they would continue to defend the policy as it moved through the courts.

Homeland Security Secretary Kirstjen Nielsen, speaking at a San Diego news conference, called the ruling "dangerous" and expressed confidence that it would be overturned on appeal.

"Our asylum system is broken and it is being abused by tens of thousands of meritless claims every year," Katie Waldman, spokesman for the Department of Homeland Security, and Steve Stafford, the Justice Department spokesman, said in a statement.

They said the president has broad authority to stop the entry of migrants into the country.

"It is absurd that a set of advocacy groups can be found to have standing to sue to stop the entire federal government from acting so that illegal aliens can receive a government benefit to which they are not entitled," they said. "We look forward to continuing to defend the executive branch's legitimate and well-reasoned exercise of its authority to address the crisis at our southern border."

Presidents indeed have broad discretion on immigration matters. But the court's ruling shows that such discretion has limits, said Stephen Yale-Loehr, an immigration scholar at Cornell Law School.

"The ruling is a significant blow to the administration's efforts to unilaterally change asylum law. Ultimately this may have to go to the Supreme Court for a final ruling," said Yale-Loehr.

The advocacy groups accused the government of "violating Congress' clear command that manner of entry cannot constitute a categorical asylum bar" in their complaint. They also said the administration had violated federal guidelines by not allowing public comment on the rule.

But Trump administration officials defended the regulatory change, arguing that the president was responding to a surge in migrants seeking asylum based on frivolous claims, which ultimately lead their cases to be denied by an immigration judge. The migrants then ignore any orders to leave and remain unlawfully in the country.

"The president has sought to halt this dangerous and illegal practice and regain control of the border," government lawyers said in court filings.

Administration officials said the asylum law changes were meant to funnel migrants through official border crossings for speedy rulings instead of having them try to evade such crossings on the nearly 2,000-mile border.

But many border crossings such as San Ysidro already have extensive wait times. People are often forced to wait in shelters or outdoor camps on the Mexican side, sometimes for weeks.

Gelernt said some people seeking asylum cross between official ports because "they're in real danger," either in their countries of origin or in Mexico.

"We don't condone people entering between ports of entry, but Congress has made the decision that if they do, they still need to be allowed to apply for asylum," he said.

Trump, who had made stanching illegal immigration a top priority since his days on the campaign trail, has made no secret of his frustration over the swelling number of migrants heading to the United States. The president ordered more than 5,000 active-duty troops to the border to prevent the migrants from entering.

Whether asylum seekers would try now to enter between official ports of entry was unclear. One migrant waiting at the official border crossing vowed to stay in line regardless of the ruling.

"I've always taken the correct path, and I'm not going to do something illegal now," said Byron Torrez, 28, of Nicaragua.

Torrez said he fled Nicaragua after someone threw acid at him during a government protest. He said he did not travel with any of the caravans.

"I think it is good that the court did this because a lot of people cross illegally, not to break the law, but because they believe you have to get to the U.S. first before requesting asylum," he said.

U.S. immigration laws stipulate that foreigners who touch U.S. soil are eligible to apply for asylum. They cannot be deported immediately. They are eligible to have a so-called credible fear interview with an asylum officer, a cursory screening that the overwhelming majority of applicants pass. As result, most of the migrants are released with a date to appear in court.

In recent years, more and more migrants have availed themselves of the asylum process, often after entering the United States illegally. A record 23,121 migrants traveling as families were detained at the border in October. Many of the families turn themselves in to the Border Patrol rather than line up to request asylum at a port of entry.

The Trump administration believes the migrants are exploiting asylum laws to immigrate illegally to the United States. Soaring arrivals have exacerbated a backlog of pending cases in the immigration courts, which recently broke the 1 million mark. Many migrants skip their court dates, administration officials say, only to remain illegally in the country, which Trump derides as "catch and release."

Information for this article was contributed by Miriam Jordan of The New York Times; by Maria Sacchetti, Sarah Kinosian, Dan Lamothe and Nick Miroff of The Washington Post; and by Nomaan Merchant, Julie Watson, Jill Colvin and Colleen Long of The Associated Press.