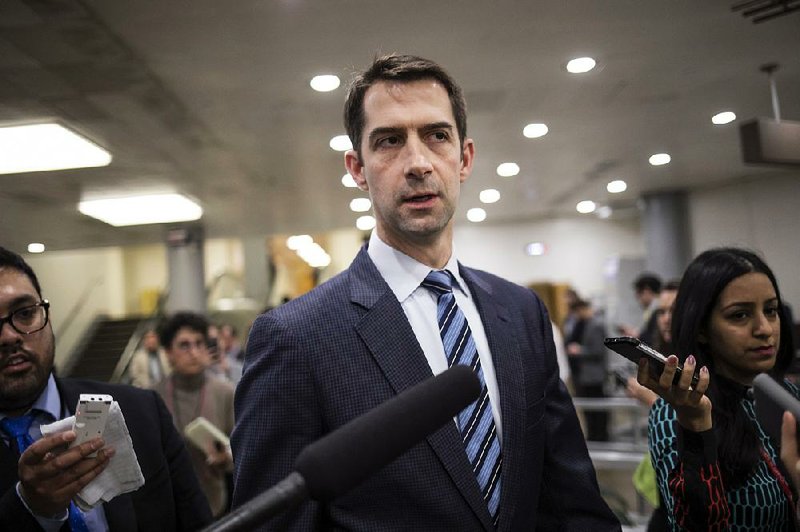 Rep. Tom Cotton, R-Ark., is interviewed by reporters following final votes for the week, at the Capitol in Washington, Thursday, Jan. 25, 2018.

WASHINGTON -- The former head of the New York City Police Department blasted U.S. Sen. Tom Cotton on Wednesday for opposing legislation that would overhaul the federal criminal justice system, accusing the Arkansas Republican of "misleading the American public and intentionally misrepresenting the facts."

In a letter to the state's junior senator, Bernard B. Kerik said Cotton had "engaged in dishonest tactics meant to demonize" the First Step Act. Kerik accused the lawmaker of "trying to frighten the public."

The bipartisan legislation, which is backed by the White House, would scale back mandatory minimum sentencing laws, reducing penalties in some instances and giving judges greater discretion when sentencing nonviolent offenders with limited rap sheets.

The changes would apply only to those convicted of federal crimes.

If approved, those imprisoned under the three-strikes law would no longer face automatic life sentences; instead they would face 25 years in prison. It would also make retroactive a 2010 law that reduced the disparity between powder cocaine and crack cocaine-related convictions.

In addition, the legislation would expand early release programs for low-risk prisoners, enabling well-behaved inmates to serve shorter sentences and to get credit for enlisting in job-training programs, among others, supporters say.

The use of shackles to restrain pregnant women would generally be prohibited. The exceptions would be because there was no other means of stopping a woman who was a flight risk or who was determined to harm herself or others, or if it was necessary to protect her medical safety.

Kerik, who served time in federal prison after committing tax fraud, noted that he had "seen the inner workings of the Federal Bureau of Prisons (BOP) for three years and eleven days."

He maintained that the First Step Act, if approved, would "reduce recidivism, reduce prison overcrowding; and make communities safer, by having offenders leave prison for real jobs, instead of having to revert to crime."

Kerik's perspective is shared by the Fraternal Order of Police, which announced its support for the legislation earlier this month.

The First Step Act also has the backing of a broad range of groups, including the American Civil Liberties Union, the Faith & Freedom Coalition, the National Urban League, Prison Fellowship and Koch Industries.

Cotton has argued that the proposal is flawed. Rather than rushing to pass the bill in the final days of a lame-duck session, he has called for Congress to hold hearings on the legislation.

"Senator Cotton appreciates Mr. Kerik's perspective but respectfully disagrees. Senator Cotton considers fentanyl and methamphetamine trafficking under § 841(b), threatening to assault, kidnap or murder a federal judge or official under § 115(a)(1)(b), and assaulting law enforcement officers under §111(a) to be violent crimes that should not be eligible for any type of new early release. As Mr. Kerik acknowledges in his letter, these crimes -- and far worse ones -- are eligible for early release in the latest version of the bill," it said. "Senator Cotton is hopeful that the bill's drafters will amend the bill to add these to the list of 'ineligible crimes' for early release."

Cotton has been one of the most high-profile critics of the First Step Act. While he was attorney general, Jeff Sessions also voiced doubts about similar legislation.

More recently, the National Association of Assistant United States Attorneys has announced its opposition to the First Step Act. It argues that the legislation would result in the early release of some violent criminals and would not reduce recidivism.

"The true purpose and primary effect of the [First Step] Act would be to reduce the consequences for serious criminals when they break the law, including those criminals who commit heinous acts of violence, drug trafficking, and sex crimes," the organization stated in its written critique of the legislation.

An earlier version of the bill passed in the House of Representatives in May by a vote of 360-59. All four House members from Arkansas backed it.

Cotton, on the other hand, has consistently opposed efforts to scale back criminal penalties.

In May 2016, speaking at the conservative Hudson Institute, Cotton mocked supporters of similar legislation, calling them "criminal-leniency advocates."

Those "who have security details and live in gated communities" may support shorter sentences, he said.

"But when you live in Osceola or Trumann or Pine Bluff -- working-class towns in my state where crime has been increasing lately -- you can't afford such woolly headed abstractions," he added.

In his speech, Cotton rejected the notion that too many Americans are behind bars.

"For the vast majority of crimes, a perpetrator is never identified or arrested, let alone prosecuted, convicted and jailed," he said. "If anything, we have an under-incarceration problem."