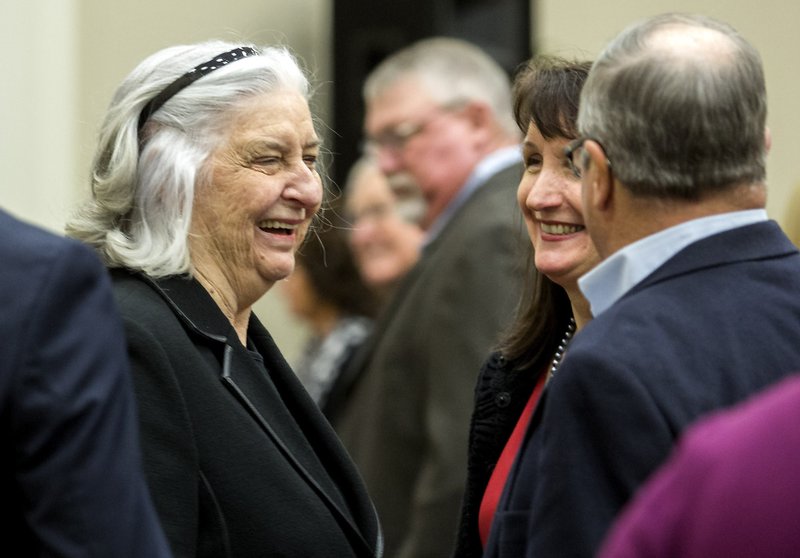 FILE — Betty Bumpers visits with family and friends on Monday, Jan. 11, 2016, following a memorial service for her husband, U.S. Sen. Dale Bumpers, inside the First United Methodist Church in Charleston.

Betty Bumpers, known for her efforts to promote childhood immunization and world peace, died Friday at her home in Little Rock of complications from dementia and a broken hip, said her son Brent Bumpers. She was 93.

She was the wife of Dale Bumpers, who was governor for four years and a United States senator for 24 years. He died on New Year's Day 2016 at the age of 90.

After her husband became governor of Arkansas in 1971, Betty Bumpers, as first lady, started a campaign to have every child in the state immunized against childhood diseases by 1974.

The campaign got national attention through the Centers for Disease Control. Betty Bumpers assisted other states in developing similar immunization programs.

She moved to Washington D.C. after her husband’s election to the U.S. Senate in 1974.

After Jimmy Carter was elected president in 1976, Betty Bumpers and First Lady Rosalynn Carter worked to expand the immunization campaign.

"In 1982, Bumpers and other congressional wives founded Peace Links on the idea that ordinary American women could develop lasting relationships with women in the Soviet Union based upon a shared concern for the well-being of children and families," according to the Encyclopedia of Arkansas History & Culture.